A Common Purpose to rinse Council reserves and strip the wealth of the UK taxpayer is ongoing. It’s sad to report that the Government is your enemy.

Since being elected in 2019 to the Holme Valley Parish Council, the local political establishment within Kirklees Council pulled out their well understood playbook when they would prefer that someone just kept quiet.

Five figure payments by Councillors made out to a convicted fraudster is, evidently, a matter to be kept quiet rather than to made more widely known to the public as this particular elected representative would have preferred.

I may have provoked certain people with the choice of my words. Police, Labour Councillors, LGBT activists, local ‘journalists’/presstitutes, local Labour Party Facebook ghouls – all provoked by so few words from a mere parish councillor from the Holme Valley promoting Direct Democracy. I certainly provoked Julie Muscroft, the Council’s ‘Service Director Governance and Commissioning Monitoring Officer’, or ‘Monitoring Nazi‘ for short as she was described in the local Common Purpose ‘news’ outlet Examiner live, having boasted in writing to her ‘Nazi’ credentials. Democracy is so, so, yesterday.

It is strange how a few words can raise the heckles in so many with a Common Purpose, when child rape, murder, invasion, extortion, state euthanasia, Islamic violence and fraud remain matters to be ignored and not spoken about. Perception is all. Reality? That’s for the little people to have to worry about.

Julie has a ‘Leading Beyond Authority’ problem. One which is becoming more widespread and not limited to this particular public sector pond-life. It is often called ‘Cancel Culture’. Soft words for a sinister and real problem. There’s a sickness within Kirklees Council and they don’t want the public looking at it or seeing it.

I wrote to Julie Muscroft again on the 29th of October 2021. Our forebears gave their everything for my freedom to express myself as I see fit. Julie thinks she can befoul this bequeathment and using paid public office so to do. My letter expressed my disagreement with her:

Attached to this email is a pdf containing the following information:

I trust that you will advise this latest batch of vexatious anti-democratic complainants with sadly censorious and potentially fascistic tendencies, that you have no authority in the matter of my public verbal and written expressions or that of any other person, that we live in a free land of laws where individuals’ rights to free expression are protected and cherished, not policed by bureaucrats acting outside the scope of their legal authority. I suggest that it is the duty of a public servant in authority and in such a position as yourself to reinforce these English traditional foundational principles amongst the wider public.

I note that any advice you may pass on to the complainants would be quite ‘late in the day’ though, as it appears that your department has, incredibly, taken over 450 days to make me aware that you’d received these complaints. This, along with other evidence, speaks of a what I might describe as a ‘lax’ approach by your department in the handling of complaints in a timely manner for the benefit of both the complainee and the complainant, whether the complaint is vexatious or not. I have for this reason, by copy of this email, alerted the ‘local democracy correspondent’ in the hope, however vain, that he may take an interest in the efficiency and professionalism of your department. I have also alerted by copy of this email my local District Councillors who have an interest in the Holme Valley and basic standards in public life.

I suggest that the Code of Conduct (both the one I signed and which is relevant, and the one to which you refer) is clear – it  only applies within the limits defined therein and I take pride in having acted and continuing to acting sincerely within the spirit and the letter of the CoC whenever I am acting in my official capacity.

May I also remind you that I remain an elected Councillor each second of each day for the duration of my office, whether I am acting in my capacity of a Councillor or whether I am not.

You have no authority in the matters of my personal public statements or that of any other person, however hurtful those statements may be to the weak, to the corrupt, to the censorious or to the deviant and it shames your office that you pretend that you do. 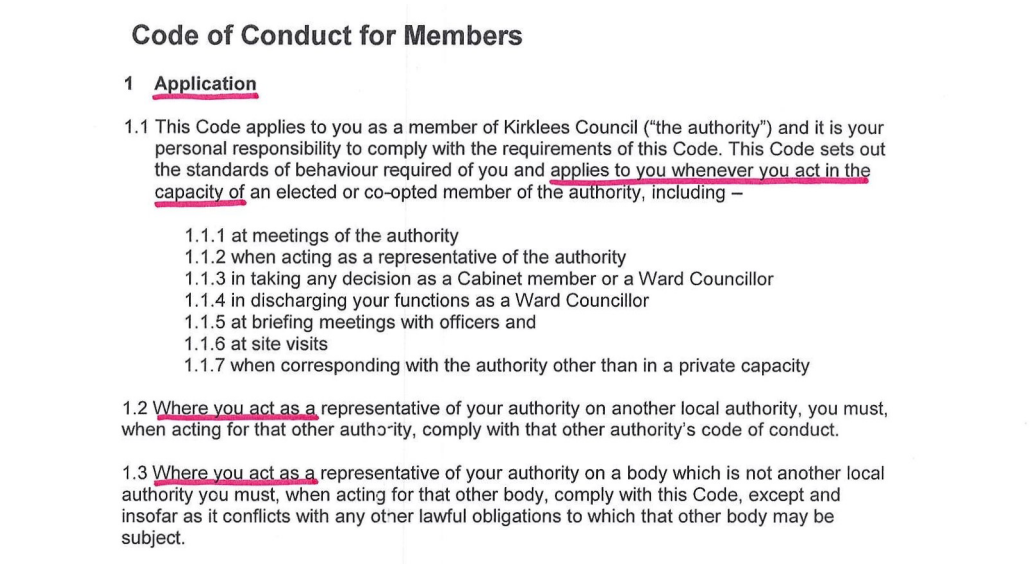 It is sad to see the land of Common Law and Magna Carta reduced to this. The Government is too big. Far too big. It does not govern for the people, but for itself and its interests. The Government’s interests are those of internationalists, not those of the British people. They tell you this in their language, their language repeated in countries all across the world.

Are you sick of hearing ‘Build Back Better’ yet? Boris Johnson in the UK, Justin Trudeau in Canada, Scott Morrison in Australia, Joe Biden in the USA, Ursula von der Leyen at the EU, Jacinda Ardern in New Zealand, Klaus Schwab at the World Economic Forum, the Royal Family, and Jason McCartney MP for Colne Valley – all saying the same thing. Repeat, repeat,repeat – Build Back Better, Build Back Better. Though the New Zealand branch of Globalist Inc struggles somewhat with basic instructions – the Kiwis are “Building Bick Biddar”.

To build something back, that ‘something’ first has to be destroyed. Destroy and reconstruct. Dissolve and Coagulate, as it were.

Currently our ‘Conservative’ Government, and other governments that don’t work for their own people anymore, are in the ‘destroy’ phase. You might have noticed with the ‘needle-rape’ threats, the mask hysteria and the new world order of COVID focused, autonomy surrendering ‘life’?

If you are waiting for the ‘better’ to be built back by the Common Purpose controllers of our public institutions, you might just be waiting for a long time. You were warned: Pay won’t keep up with inflation, nor pensions despite the ever increasing ‘locks’. NHS services aren’t there, fuel prices up, electricity bills up, congestion, crime rates… …Oh, and heat pumps for future cold houses.

The key to this cycle of destruction, or managed decline,  is held by the Political Parties – Conservatives, Labour, LibDems, Greens, SNP – essentially a Uniparty – with their appointed Common Purpose place-persons controlling all the budgets of all our institutions and charities.

Apathy currently reigns and meanwhile the coffers are being plundered and emptied. What a mess.

A mass movement is required to remove this Uniparty and clean house if the people of the UK wish to find decency in Governance again in the UK. A return of common sense and an eradication of Common Purpose will not magically happen.

In the meantime, I’ll probably keep poking the Beast.

James Dalton 2021, (taking time out from his elected role to vent his spleen… …and provoke)

‘Think Global Act Local’ was the mantra of the Green movement in the 1980’s Jonathon Porritt era before the greens lost their way and deserted science. In the 70’s and 80’s there was cohesive thinking [more…]

I have spent many years and a good number of pounds trying to find a decent pillow. If it’s not headaches caused by neck ache then it’s shoulder ache and upper back ache all caused [more…]

The hacks and TV heads are currently having a collective meltdown. The 31st of October is less than two months away and the remaining Remainers who George Galloway likened to “a collapsing soufflé” are making [more…]