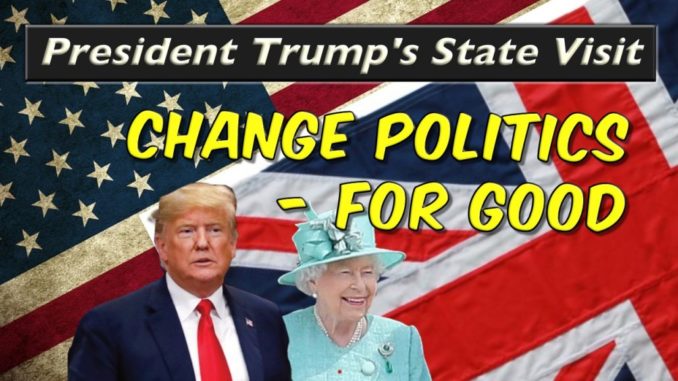 As a Direct Democracy Party representative I am delighted to welcome the State Visit of President Donald J Trump to the United Kingdom. There is no greater historical bond between two nations shaped by an ingrained desire for natural justice and individual freedom than that of the USA and the United Kingdom. The 75 year anniversary of the D-Day landing is a salutary reminder of this as many of us reflect on how those events shaped our own family histories: the grief, pain, relief, pride and ultimate liberation.

My instinct to enthusiastically welcome President Trump to the UK does not appear to be shared universally among my compatriots.  My knowledge of President Carter was less than nothing when I was taken to see him during his visit to the UK. I was, and am, no fan of President Obama, but never considered that as the elected US President he should not be afforded the full respect in which our representatives should hold that office. But in the UK the Trump Derangement Syndrome (TDS) is virulent and hatred for the 45th US President is loudly and crudely expressed by many in the public eye. A hatred advertised by broadcast media 24/7, pumped out constantly since Trump announced his candidature for President. Here is a definition of TDS dating from 2017 from the UK’s premier political talk shop, Going Postal.  The ‘Russia Collusion’ hoax – the Mueller ‘witch hunt’- has consumed Trump’s opponents for over two years, but this has proven to be a nothingburger . So the Trump demonisation bandwagon moves on from Russia to the next fantasy that can be used to frame him as the dangerous, unstable, fascist devil… …the lies that have gone before will soon be forgotten by a captive audience of Trump haters willing to amplify the next story  – of racism or sexism, abuse or disablism, homophobia or anti-Semitism, Islamophobia or far right populism– there is too much invested in the demonisation of Trump by the Democrat party and its globalist media allies throughout the world to reverse trend and adopt a more objective approach to reporting on him. Trump simply has to be bad: for this is the foundation of the belief, without which the fantasy, the virus, the TDS cannot be sustained. The foundations of Trump hatred need constant underpinning in the light of his real world achievements in his first term as President*.

Those with TDS reflect little on the shared history of the USA and the UK. Too many are closed eared and keen of tongue in the face of the quiet understanding and respect of the vast, silent majority of Britons. Those with TDS give scant thought to truth or reason when comparing Trump to 20th century European Socialist and Fascist movements – and by association, besmirching the silent respectful offspring of those brave men who stood firm against Germany in WWII as those involved in the D-Day landings did 75 years ago. The extreme language used in relation to Trump is amplified by those with partial political interests, notably by those opposed to respecting the decision of 17.4 million voters in the 2016 Referendum.

Perhaps the most striking feature of modern political life in the UK is witnessing behaviour from those in office that twenty years ago would have been unimaginable to me. It is not just Sadiq Khan, the elected Mayor of London, but his behaviour is typical of that of which I speak – unimaginable to me twenty years ago. No decorum, no diplomacy, crude insults, lies and worse – lobbying to ban the POTUS from entering the UK and calling for protests against the President during his state visit. This behaviour is that of a street activist, not a holder of high office (or any office for that matter). It is embarrassing from a public servant. But the embarrassment doesn’t end there. The UK press, supposedly there to hold those in power, like Sadiq Khan, to account for the people have been doing anything but. It is their job to expose Khan’s immaturity, insolence and damaging behaviour for what it is. It is their job to question him about the basis of the accusations and insults he throws at Trump, but they don’t. Worse, the media support Khan, encourage him, promote his insolence and normalise his lies, thus spreading hatred and a fear, sustaining and maintaining Trump Derangement Syndrome and feeding social division and discourteous discourse.

What is striking about the start of the Presidential visit is that it is Trump who is praising the UK, Trump who is dignified and speaking of past, present and future relations Trump who is respecting the office he holds, Trump who understands the history of our countries and the sacrifice of generations past, Trump who talks up the UK. It has even been left to Trump to put Sadiq Khan in his place with an atypically funny put down on his favourite communication medium: Twitter. Meanwhile, the UK press along with our political Establishment continue to talk the UK down, disparage Trump and play ‘defence’ for a failing LibLabCon UK political establishment, incapable of basic diplomacy or competence.

There are however, cures to TDS. The virus is spread through corruption in a number of our institutions, notably the broadcast media, political pundits and politicians and ‘educators’ – those involved in schools colleges and universities. Cures come in the form of rational consideration and reflection. To change politics for good such cures need to be put to work on our media, educationalists and on our politicians from parish level through to Westminster.

Trump has changed politics for good in the USA.

We need to change politics for good in the UK. Who’s game?

*Trumps achievements in office include:

This is not an exhaustive list, but a selection of achievements which match up with pre-election Trump campaign pledges.

Monday It’s very quiet here this bright Monday morning. No baby Wilf crying. No Mutt barking at Wilf’s crying. No Bozzie shouting at the Mutt to be quiet. No Little Otter telling Bozzie not to [more…]

A particularly insidious form of evil

There are moments in life when one remembers exactly where they were when a particular event occurs. The death of JFK, the moon landings, Hillsborough, the death of Diana, 9/11. For all these events I [more…]

(This article and part 2 are meant to be a bit of fun, and not to be taken seriously.) Time for a bit of new year fun. In response to a previous article, someone asked [more…]