Thanks Going Postaliers, for these wonderful ‘photographic adaptations’ – I saved them after my first article on Phoenix in June – they are in her photo file and much appreciated.

We were just coming, successfully, to the end of the Mite Wars in June, when I wrote the first article and I’d used the five days when Phoenix was in her smaller treatment cage, to rearrange the large one. 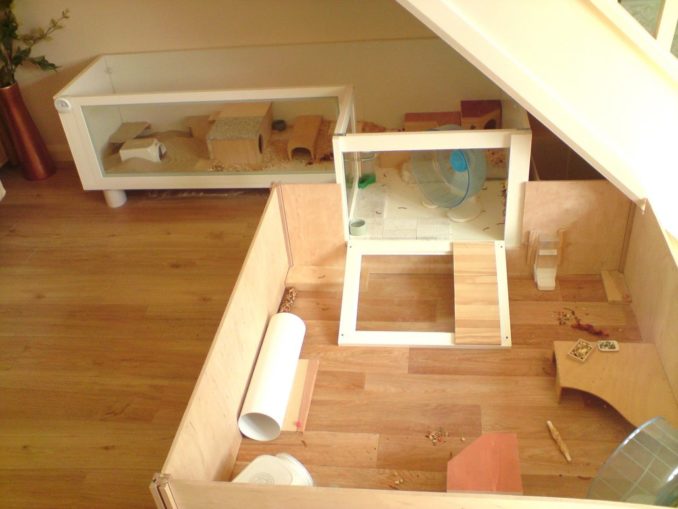 I gave her a bigger sand area (that was her favourite space) and more tunnels (bedding not quite finished in this pic). I’m so glad I did – she had two months of really enjoying the space before she went downhill, really fast.

The vet put her to sleep at the beginning of September.

It happened very quickly, from getting a bit ’slower’ and seeming to struggle with anything except very dim lighting. You can see her squinting in the light here… 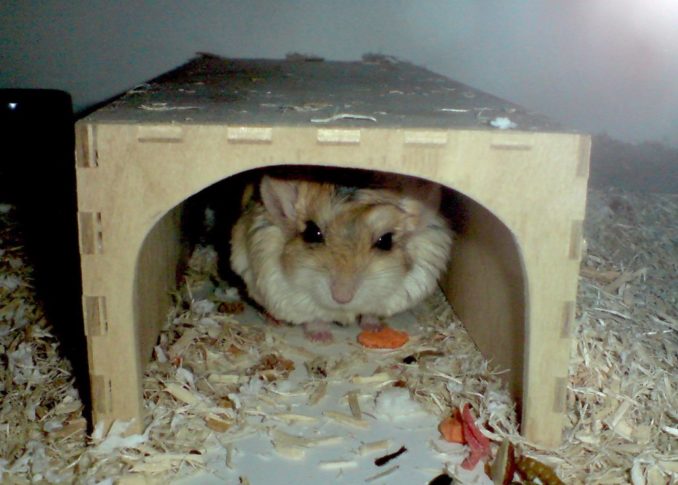 Then, within twenty-four hours, she seemed confused and breathing heavily and I knew that her heaving sides meant she was in pain.

I stayed up with her that night and the vet saw her, as an emergency, at 9am the next morning. He found the multiple small tumours that weren’t there when he examined her for the mites two months earlier.

He said it could be pulmonary tumours causing her breathlessness, or it could be a respiratory infection due to the tumours/declining health, so he gave her a long-acting analgesic and fast acting antibiotic. He said we’d know by the next morning – if she was no worse/slightly better, it would be an infection that the fast-acting antibiotic was treating and she may have a few weeks/months left if we could treat it successfully. If not…

Unfortunately, it was not and she got worse that night. The only good news is that the analgesic did its job. I put her in her nest & covered her with bedding to keep her warm. I was also concerned that she wouldn’t drink any water from the tiny spoon as she had the night before. I was giving her water, because she seemed to have forgotten where her two water bowls were, despite one being just outside her nestbox.

About 10pm, she came out of her nest, but within a few inches of it, her back legs became paralysed and her eyes were completely shut.

She wouldn’t take any water either.

I put her back in her nest, covered her, except for her head, to keep her warm and at least she was breathing quietly – no heaving sides, no pain. I didn’t think she would last the night. Needless to say, I stayed up, dozing on the sofa and not a sound came from her nestbox.

At about 6.30am, I thought she had gone, but when I took the lid off her nest, she was exactly as I had left her – still breathing, very cold. I took her out gently and warmed her up in my hands and got a tiny syringe with water for her. She grabbed the syringe with her little front paw, managed to tip her head to the side, and drank.

Then, of course, I felt so guilty that I hadn’t checked her earlier, but I’d wanted to leave her in peace.

I knew she wasn’t going to recover. With her eyes permanently shut and the paralysis of her back legs, it was obvious that the tumours were the cause.

Finally, I got her carrier warm, using an old heat pad, and after she’d had all the water she wanted, I put her inside with a piece of fleece over her and got her to the vet for 9am. He put her to sleep.

Once I’d got myself together, to drive safely, I brought her home.

On the way home, I was talking to her (daft, I know), just as I had on that long journey home when I first picked her up. I talked to her about her first few months and how she gradually changed from a scared little creature, to being confident enough to put both her paws on my hand to grab her treats and let me stroke her gently while she ate them; how much I was going to miss her. And that when I was ready, I would use her enormous cage to help an older rescue animal that no one wanted, to give them a happy home, for however long they had left. I knew I couldn’t get another Duprasi after Phoenix – not yet.

I buried her in the garden 3 days later.

Two weeks later, after I’d cleaned out her cage, I decided to start searching for rescue sites and bookmark them for when I was ready to look for a rescue. But that morning, on the second site I visited, I saw a new post, only activated about half an hour earlier, to find a home for a poor hamster who had spent all his life (1 year 3 months old) in a tiny cage no bigger than a washing up bowl, with a wheel so small, he couldn’t even get into it – it makes me so angry.

And so, I ended up driving to Tewksbury at 4am on a Saturday morning, to pick up Paddy. I wanted to miss the traffic, to make his car journey as short as possible.

He’s such a gentle soul and although it was sooner than I’d planned, it has helped, knowing that Phoenix’s massive cage is helping another little animal.

Paddy is such a gentle little chap – amazing considering the dreadful life he’s had. His treat is a tiny spoonful of porridge every day.

He too, has access to the run when I’m there, but he prefers his cage, coming out rarely and only staying out for a few minutes. 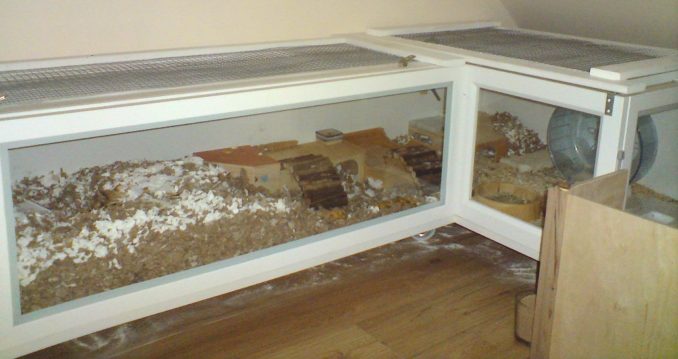 (The powder on the floor, under the cage, is diatomaceous earth, to stop any crawly critters getting into the cage)

I think, after the tiny cage he was in, this one seems like a huge territory for him and he seems happy just bumbling about and exploring it.

Unfortunately, he’s now nearly 18 months old and the average lifespan of a ’shop bought’ hamster is 18 months to two years. Fingers crossed he outlives the average, now he’s got a decent cage and much better food, but at least his twilight months will have been his best.

The lady who saved him is just a hamster owner, with two of her own and space for 5 rescues. When she has room, she trawls the ads and finds another little soul to rescue. If she can’t find a suitable home, she keeps them herself (she insists on pictures of the cage with tape measure included to see the measurements and has a long telephone chat too). She felt my ‘Hamster Mansion’ would be the perfect retirement home for Paddy.

And so finally, on a happier note, two pictures of Paddy. The first taken by the lady who rescued him, 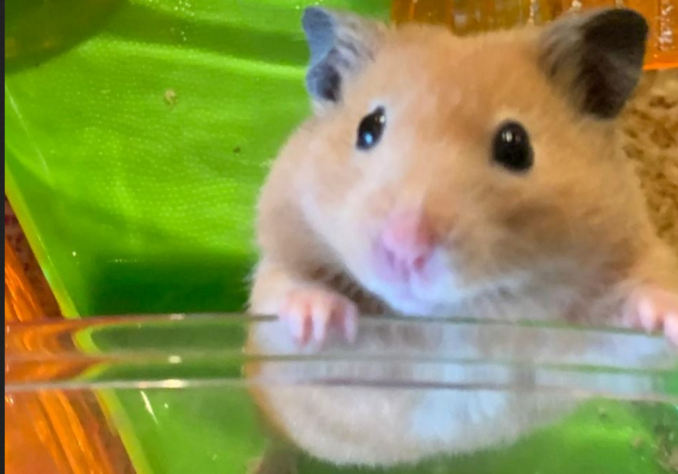 The second, taken in poor light with a crappy camera! Paddy is just walking onto my hand for his porridge treat. 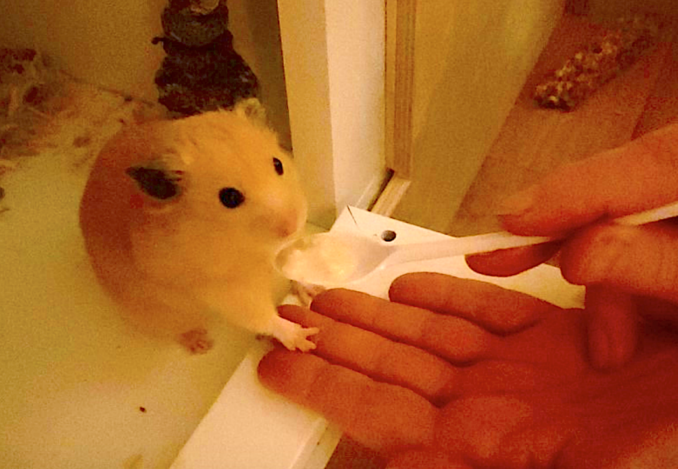 Reaching the ripe old age of 61, being a bit of a hermit and having semi retired, I decided to act upon my love of small animals and adopt a hamster. Having looked after hamsters [more…]

He was born in the maze of kennels and lean-tos in the back garden of an unassuming end terrace on the outskirts of Aldershot. The house was owned and inhabited by a strange and mysterious [more…]

There is no such thing as the perfect gundog, and anyone who says there is should be ashamed of the barefaced lies they tell. There are some incredibly well trained dogs out there, and some [more…]