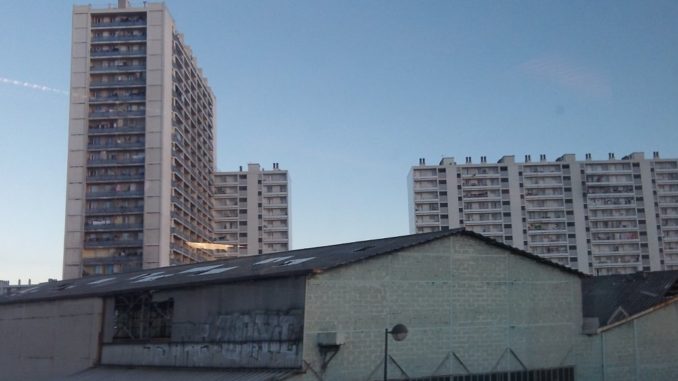 The black and beur (French-Arab) communities have always had complicated ties with France. The early waves of European immigrants — the Italians, the Spanish, the Poles — came from proud, independent peer cultures, and the gap in living standards was usually not huge. But the non-European influx is mostly a by-product of colonialism. France was heavily involved in the trans-Atlantic slave-trade, the creation of Caribbean plantation colonies and the carve-up of Africa. It launched campaigns of conquest and intrigue in India, where it was thwarted, and in Indo-China, where it was successful. It continued to do this, moreover, while trumpeting to the world the values of liberty, equality and fraternity.

France of course was not alone in its blind and breathtaking hypocrisy when it came to annexing other people’s homelands. However, in a nod to liberty, it did not try to re-conquer Haiti, the first black territory to break free from the European colonial yoke and the second independent state in the Americas, and, in a gesture of equality and fraternity, has granted some post-colonial Caribbean territories administrative parity with France. Imperial France also had enough respect for and trust in the African fighter to create a “Force Noire” at the turn of the century, built around the Tirailleurs Sénégalais (Senegalese riflemen), who served both the empire and the “motherland” in World War I. The environment in France was such that black American athletes like 1899 world cycling champion Marshall Walter “Major” Taylor and boxer Jack Johnson, the first black American world heavyweight champion, competed in France to escape segregation and racism in the United States. 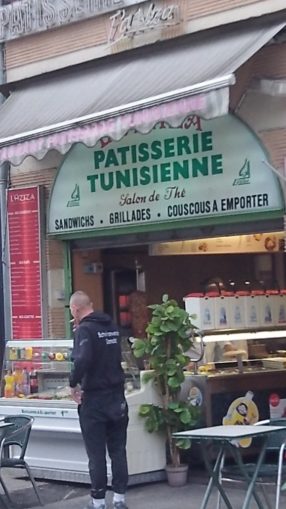 Still, the French and their colonial subjects were never really equals or probably true friends. In the 19th century, Africans in France were treated as freaks, paraded around the country in shows for the masses to mock. Chocolat the Clown, kicked when he misbehaved — one of the slogans was “le nègre battu et content” (the negro, beaten and content) — became a popular symbol of colonialism. Today, “when you leave the Caribbean, there’s no doubt in your mind that you’re French,” remarked footballer Lilian Thuram. “But when you arrive in Paris, you’re not French anymore; you’re black.”

Thuram was born in Guadeloupe, which like Martinique and La Réunion are fully French départements, with the Tricouleur as their national flag. On paper, France does not discriminate between “the Hexagon” and certain old territories. In May 2013, the National Assembly voted to remove the words “race” and “racial” from the penal code, and former President Hollande wanted to delete the word “race” from the French Constitution altogether. Yet political representation and social advancement have lagged institutional amendment. In 2013, only five of France’s 577 members of Parliament were black.

As for the rise of Islam in France, I only have to think back on kindly Fatima, from an Algerian family, alongside whom I worked in a Paris office in the 1980s. She never wore the veil or uttered a word of prayer in those two years, and went out to the bars with other office workers without a second thought. Her only obvious Islamic attribute was her name. How would she fare today, if she had been brought up in, say, in a quarter of Marseille where women are bundled up in black robes and banned from the cafes? There was a time, up to the 1970s, writes Éric Zemmour, when today’s Fatimas, Leilas and Samiras would have had the forenames Catherine, Nathalie and Françoise. The prefecture would have refused to register any forenames outside the official calendrier des noms (directory of (permissible) forenames — a curious reminder of how bureaucratic France remains under the idealistic surface). Social pressure from neighbours, and sometimes even family, would have kept recalcitrant parents in line. In those days, neighbours, fellow workers and established fellow immigrants kept in check the more “shocking manifestations” of the Muslim cult — the bathtub sacrifices, polygamy and female circumcision, Zemmour goes on. “When in Rome” was the watchword.

And now, just 30 years later, radical Islam has entrenched itself and brought to France terrorism, jihad, no-go zones, church desecration, gender segregation, veil enforcement and the cloistering of women. Certain Arab quarters seem to be in a state of permanent lawlessness, fomented by the return of jihadists from Syria and abetted by French unions that allow radicalised Muslims to “turn bus depots into prayer halls.” The “when in Rome” doctrine has become “a hated symbol of the superiority complex of the white man.” 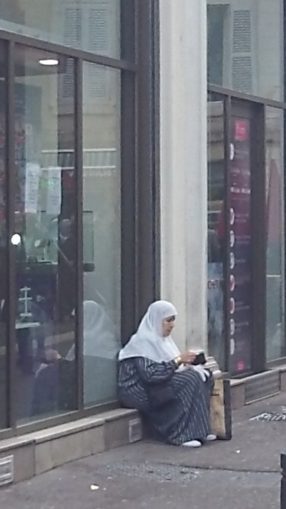 And when I was there, of course, there was no such thing as “Islamophobia.” Today, it is dangerous to publicly criticise Islam in any way (as it is in all major western countries now) and the French establishment stands frozen in fear of radical Islam and paralysed before its excesses. No French jihadis who went to Syria to cut off heads with ISIS lost their citizenship, says Giulio Meotti in a 2017 article titled France: A Decomposing Civilisation. When Charlie Hebdo’s offices were attacked and 11 journalists were killed over a cartoon, no major French publication dared to express solidarity by running caricatures targeting Islam. More than 2,500 people victims of terrorist attacks in Paris and Saint-Denis are being compensated by the government. In 2016 and 2017, 32 attacks were foiled, 625 firearms were seized, 4,457 people suspected of having jihadist links were searched, and 752 individuals were placed under house arrest, Meotti says, quoting L’Express, and 15,000 French Islamists were being monitored by French intelligence. Meanwhile, in the last 12 years, 40,000 Jews have left France.

This then is the chaotic, divided and fearful France so spitefully misgoverned by Macron. The fate of Paris typifies what has happened to the whole country.

In Japan, a few years back, I was discussing the state of Paris with a Tokyo fashion-industry executive who was fluent in French after living there for many years in her youth. Now in her sixties, she had been deeply shocked by her most recent business visits. In fact, she had been disgusted. “C’est horrible,” she said, before launching into what is now a familiar litany to anybody who has witnessed Paris’ descent into the multiracial gutter: the garbage everywhere, the “refugees” camping out in the street, the dirty pickpockets in the metro, the Africans selling crap at all the tourist sites. There is actually an illness in Japan called “Paris syndrome,” the depression that afflicts Japanese women who dream of the elegant city of the cosmetics posters and then actually get to visit the place.

Most of all, the spirit of Paris is missing. “So where is that intellectual effervescence gushing out over all French culture and well beyond France?” asks blogger and journalist Jean-Michel Léglise. “What happened to the Montparnasse district, the very heart of the capital, where jazz, novel-writing, poetry and painting formed the pulse of Paris during the Roaring Twenties and after the war? What happened to the cafes, Le Dôme, La Closerie des Lilas, La Rotonde, Le Select, La Coupole, Le café du Flore and Les Deux Magots, where you could meet and even talk with [the likes of] James Joyce, Zelda and F. Scott Fitzgerald, Ernest Hemingway, William Faulkner, Jean-Paul Sartre, Simone de Beauvoir?” (Some of them are still around, trading on the old days). When I lived there 35 years ago, as an expat, Paris still retained this heritage and the power to attract. It already had considerable immigrant populations, but they mostly fitted in and were mostly an enhancement of the life of the city. I came to love couscous as much as the cuisine française. 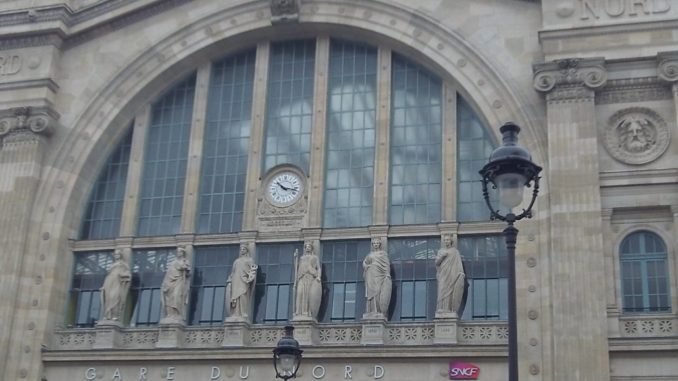 “Paris sera toujours Paris” sings Zaz in a catchy hit of 2014 — “the most beautiful city in the world.” But the clever and engaging video focuses on jazz-age Paris. It ignores the present, the recent memories of terror bombings and the destruction of Notre-Dame. And so do I. When I visit the city now, I keep my eyes above the ground floor. I am still uplifted by its beauty. Since the 1980s, there has been little new building in the centre, it seems; only the shop-names look different. The mellow beiges and creams of the high facades — this is the only European capital I know where employment agencies regularly recruit stone-masons alongside ads for secretaries — the flowers tumbling out of boxes on the balconies with their sinuous wrought-iron railings, the trees lining the boulevards, the wobbly ranks of chimney pots, the roars from the metro grills in the pavements, the crimson awnings of the cafes with their tables spilling out onto the pavement, the columns and statues that dignify even humble back-street crossroads, all these things are still here. All these things I love. But it’s the nineteenth-century city I come for.

When you think of the north of England, you think of fells and moors and hill farmers, of ruined abbeys and windswept Wolds, of gaunt mill chimneys, of terracing lurching crazily up bare hillsides, of [more…]

In the prologue we recalled a fond age of travelling to the near continent via rail, ferry and hovercraft. This landscape changed with the opening of the Channel Tunnel. At the beginning of Eurotunnel operations, [more…]

“All the routines of daily life are affected. You choose between being spat on in public places or staying at home. You are completely exposed. It suddenly becomes quiet all around you. Friends you have [more…]