Acupuncture is causing a great deal of interest in the Western world at the moment, with many people investigating its possibilities. When he reached Canton, John Alldridge asked if he could see a demonstration of acupuncture. The next day he was driven to the local hospital, where he saw a man having his leg amputated, entirely without anaesthetic, and conscious during the operation.

I would like to see a demonstration of acupuncture, I said. They thought it could be arranged. The following morning, promptly at half-past eight, a smiling Chinese arrived at my hotel and asked if I was ready to drive to the hospital. The patient was waiting, but the operation would not start until I was ready.

Hospital No 2, Bochow, Canton, is a general hospital cramming 500 beds into an old building overlooking the Pearl River. It also serves as a medical training school. There was a general air of improvisation about the place. The equipment seemed almost as old as the building. Although not dirty, it was depressingly dingy. There was about it none of the crisp, white, clinical look of a Western hospital. This hospital was as severely functional as a bicycle factory or a textile mill.

I found surgeon and patient waiting for me in an open corridor. The surgeon was young, slim, with the face of a peasant, but the long slender hands and supple wrists of a musician. His white surgical gown was clean but unpressed and he wore sandals.

The patient, a man of about 50, in crumpled pyjamas, was sitting on a plain wooden bench, one emaciated leg heavily bandaged below the knee. He had the look on his face of a frightened, trapped rabbit.

The surgeon explained casually, as if he was about to take out the man’s tonsils that the patient, a peasant farmer, had suffered for 20 years from an ulcer which had refused to heal. Now it had turned malignant. The growth was cancerous. So he proposed to amputate the left leg above the knee, and use acupuncture instead of an anaesthetic.

It is hard to know what to say at times like these, but inanely I asked the patient how he felt. He said he was frightened, but he had confidence in the surgeon. And he gave me a sad, sick smile.

I carried that smile with me all the way up in the lift to the operating room on the top floor. They gave me a seat where I could look down through a glass ceiling on to the operating table below. The patient was already strapped to the table and looking straight up at me. He was still smiling that pitiful smile.

The operating room itself was as bare and drab as the hospital. As far as I could see the only furniture was the operating table, floodlit now under a huge hanging lamp, some kits of instruments and a small electric generator. But the surgeon and his assistant moved quickly and purposefully, the surgeon talking all the time soothingly to the patient, who so far could see and hear everything. Two more young assistants – or they may have been students – leaned against the wall, gently flexing their finger muscles as if limbering up. Both wore crumpled white uniforms, faintly bloodstained. One wore sandals, the other was barefoot.

There may have been other preparatory details that, as a layman, I overlooked. But one thing was shockingly obvious. This was to be an operation without conventional anaesthetics. The patient would have to rely upon the skill of the surgeon in puncturing vital nerve centres to kill the pain.

As if to emphasis this, the arc light suddenly focused on the diseased portion of the leg, from which the bandages had been removed.

As casually as if he was selecting and balancing a dart to score a double top, the surgeon picked up a needle about four inches long and without a moment’s hesitation plunged it deep into the leg. I saw the patient wince.

He did this seven times until three needles were sticking in the flesh above the ulcer and four below. Each time I saw the patient’s face convulse, but it might have been as much from shock as from pain.

Each needle, I noticed, was attached to the electric generator by what appeared to be a fine thread. This allowed an electric charge to pass through the patient’s body, my interpreter – another surgeon – whispered. It takes 20 minutes of this to destroy the sense of pain during the operation. Now all the needles were in place and the patient’s whole body was vibrating gently.

At this point I went out for a breath of air. I badly needed it. When I returned some minutes later the surgeon was already removing the four needles from the lower part of the leg; and to my surprise was sticking them in the patient’s ears. In the nerve centres of the ear, my guide informed me, they would do the work they had previously done in the leg.

Now the crucial point had been reached. The assistants were painting the diseased leg with iodine, while the surgeon was still talking softly to the patient who now, mercifully, had his head and face covered.

“The surgeon or an assistant surgeon always talks to the patient during the operation” explained my guide. “It quietens him and removes his fear. If he cannot relax, however, we give him a mild sedative.” 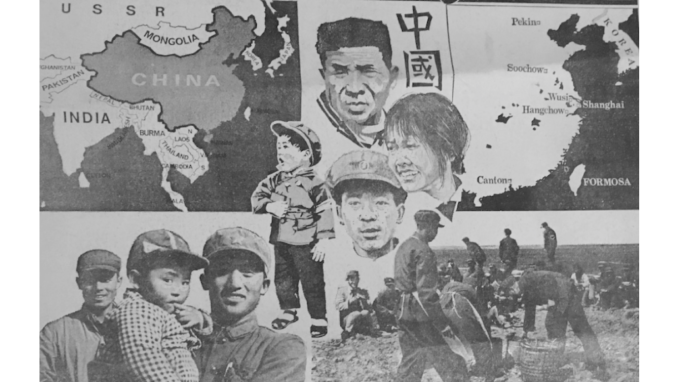 I could stand no more. I went back into the air on the roof top. I sat watching the shipping on the Pearl River, trying to forget what was happening only a few feet below me. When I returned the operation was over and the assistants were mopping up. The whole thing had taken just over an hour and the patient had been fully conscious all the time. “He is quite well” explained my interpreter cheerfully. “But he is a little tired – you see he has lost a lot of blood.”

While the patient, minus one leg, was wheeled off to bed to begin a three-week convalescence I joined the surgeon and his staff in the doctors’ common room. He was delighted to answer questions. No, there was no fear of post-operative shock. Ninety-five per cent of operations done with acupuncture in China since 1958 have been successful.

Why did he prefer using acupuncture rather than the conventional anaesthetics used in the West? Because it was simpler. You only needed a few needles instead of a lot of complicated and expensive equipment. And it was safer; there were almost no side-effects.

But he admitted there were defects. The patient may still have some sense of pain – “like a bad tooth extraction” – and there could be some temporary damage to internal organs. Because of that Chinese doctors were beginning to combine traditional acupuncture techniques with Western methods of anaesthetics.

Was acupuncture used in operations on children? Over the age of four, yes. And in childbirth? Of course.

Wasn’t he afraid he might kill his patient occasionally? In over 600,000 acupuncture operations performed in China there had not been one death.

And how long does it take a Chinese surgeon to learn the complicated techniques of puncturing the vital nerve centres? Provided he has had basic training in medical school a surgeon should be qualified to perform acupuncture after three months.

I visited the patient. He was still perfectly conscious, his head resting on one arm. Again I asked him how he felt.

He was in no pain mow, he said. It was sad to lose your leg, yes. But good to be free of all that pain.

And he smiled that same sad smile. It will be a long time before I forget that smile…..

Postcard From Summer 1954, Part One – Bournemouth

Behind the Bamboo Curtain, Part Five