Since the Spring of 2020, we’ve all had to forego certain things that were dearer to us than others. I particularly miss live debates and political rallies. The last event I attended was the Brexit Heroes Live celebratory event with Nigel. How much I would give for another cheery cheek-by-jowl evening!

In lockdown times, the options have been for me, go virtual and embrace Zoom or hang on to tangibles like pen and paper. Scribbling notes as messages in a bottle has given me more satisfaction.

I’ve used writing by hand as a way of ordering thoughts in turmoil. The sound of the silky nib or that of a scratchy one (I alternate for variety) has helped me get my head round the unthinkable. It has helped keep my anger in check. 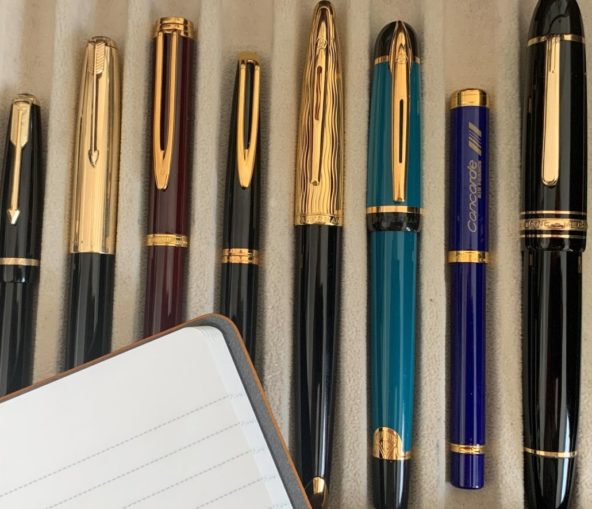 Try to imagine being told last December that: in 2020, you’ll be allowed one outing a day. All shops will shut, some renamed “non-essential” with not even an approximate definition of the term. You won’t be able to go for a coffee, alone (café shut) or with a friend (two households). When pubs reopen, you’ll have to give all your contact details to enable sinister “Track and Trace”. You might receive a phone call or a red alert text telling you to “self-isolate”: you’ll be effectively under house arrest, not allowed to go out to work or get your food supplies. The police can arrest you and fine you for non-compliance with over-reaching and ever-expanding restrictions. Families will be torn apart. You won’t be able to plan a holiday or even a work-related trip as at any point the border can be closed, that destination fenced off at either end, or you’ll have to quarantine yourself on your return, no stepping out allowed.

Staying two weeks at home? I don’t think I’ve ever done that in my life. I can understand that for some this has not been necessarily a horrifying thought – for those who have a spacious house, a dedicated room for home office / study, a garden etc. But I wish the lucky ones, like our deciders, could put themselves in the slippers of the less fortunate ones.

It was easy for the PTB to decree the lockdown (now known as Lockdown I), – people were scared, not much was known about this virus yet and there were no dissenting voices. Weeks passed. At some point we realised that the lockdown would not be “lifted”, but “eased”. However, instead of a progressive untightening of the screws, we’ve actually endured a gradual tightening of them. Better known as “the New Normal”, as part of the shadowy “Great Reset.” 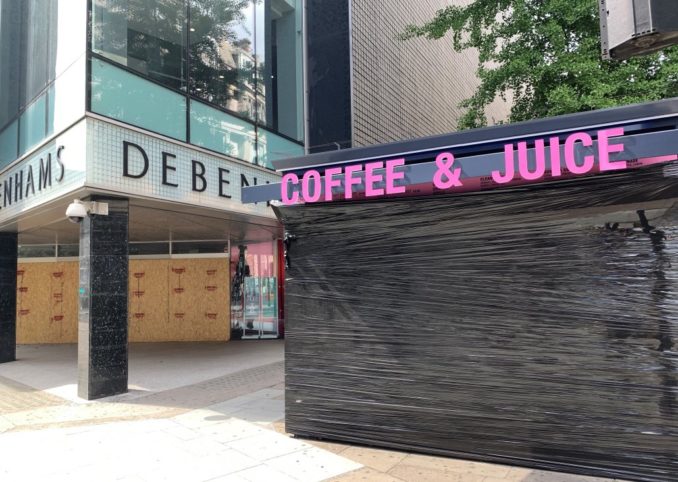 Think back: in Lockdown I, we were allowed one outing a day, but nobody could check whether Outing 1 was to go to work, Outing 2 was in fact 1 and was to go to the supermarket and Outing 3 was a walk in the fresh air. Everyone gave each other a wide berth. In May masks were a rare sight, we could breathe freely! Walking in the middle of wide streets, with no traffic and hardly any passers-by, offering one’s face to the sunshine high in the sky for a dose of vitamin D was odd behaviour but pleasant.

June saw the beginning of the new requirement forcing travellers to quarantine for two weeks on their return, putting paid to the idea of a care-free summer. 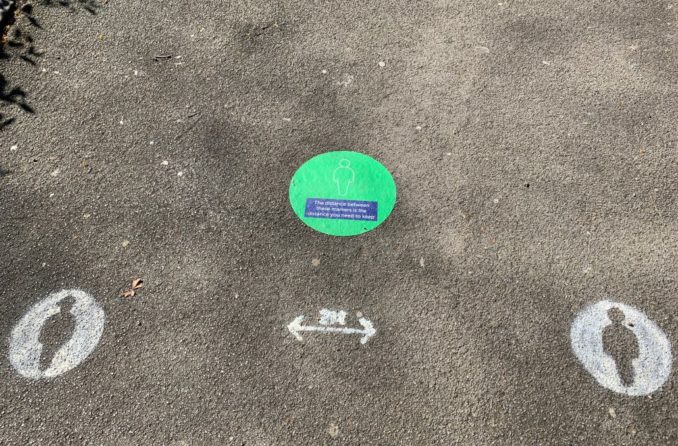 Then, after several months of going to the shops, first essential ones then all of them, with the only injunction being, “keep your distance” – they made face masks mandatory in shops (24 July in England), quickly extended to museums, cinemas and other enclosed public spaces (including private clubs). It was possible until then to avoid public transport, where they were already mandatory, but slightly more difficult to avoid shops, chemist’s, post-office etc. You had to decide, right, if I don’t want to argue with anybody in the aisles about this, certain measures will have to be taken.

Even more distressing, the wretched, – some flimsy, some sinister – muzzles were embraced by the population with shocking alacrity and eagerness. 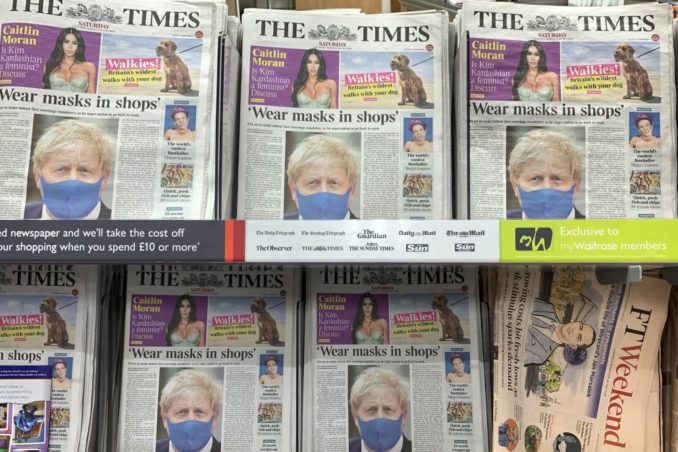 Lockdown II (5 November in England) feels contrived, a pretend unconvincing experiment that seems to impact mainly our social life, our hobbies (fun is forbidden). There might be more take-aways cafés open this time, allowing you to warm your hands around a styrofoam cup in the cold and dark street, but you have to wear a face mask to dip in and out of the food shop, the post office and the dry cleaners ! Your cash is refused in many places and you have to queue outside in the cold to abide by a magic but minuscule number of shoppers allowed inside. No more social gatherings, no social mingling, indoors or outdoors. The fines have become draconian. The spectre of a health crisis in parallel with an economic one has become real for millions. The fabric of our society which had been dented in the Spring now appears irrevocably damaged. As for the delights of your garden, well, it’s now a different season and now you understand what it felt like for those who didn’t even have a balcony to lighten Lockdown I. 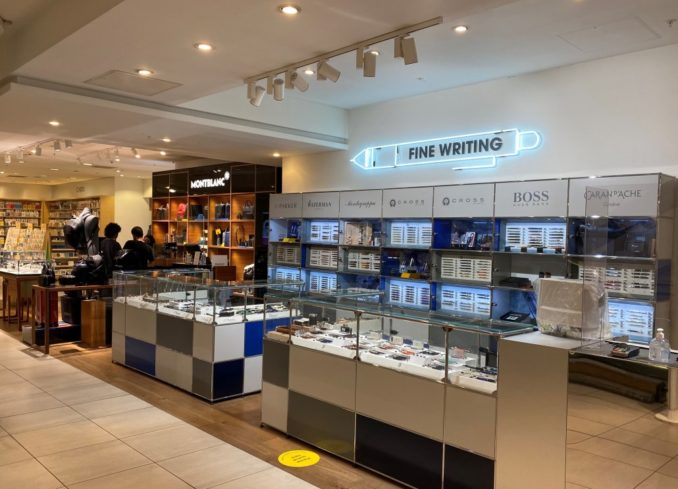 So – to find some kind of anchor, to stabilise myself on the shaky ground that life had become, to steady myself against the mental anguish expressed daily by “What next?” – I had two options: go blotto or go blotter.

Blotter in English comes from “blot” which means “stain”, a connotation a tad negative. It is a pity, as a blotter serves a worthy purpose: It does not only dry ink blots / stains, but dries one’s handwriting thus preventing smudging.

Interestingly in French, the word for blotter is “buvard”, which derives from “boire”, to drink. Quite apt in the circumstances.

This reminds us that blotting paper is sometimes called bibulous paper, also quite apt in these strange times when we should be forgiven for being driven to drink.

Give me a blotter to soak up my tears of exasperation later mixed with anger; to soak up the overflow of my distress; to soak up the ink of my thoughts couched on paper so that they can run faster and let me escape.

Often fountain pen lovers are also into inks, especially the younger ones. I dabble a bit in inks: it’s cheaper to treat yourself to a new bottle of ink than a new fountain-pen; it’s safer to buy on-line than a fountain pen, vintage or not. However I find it a bit tedious, all these variations of blue, of black, of green, which necessitates the constant washing and flushing of the pens. I find it more convenient to stick to “to each pen its own ink”, it becomes a kind of identity. Plus, all pens don’t like all inks, and vice versa and I find it complicated enough that not all pens like the same paper. Finding the right association of pen + ink + paper is an equation too far when your thoughts are raging in your head and need an outlet.

The blotter is an accessory in the pen lover’s panoply that has been side-lined and largely forgotten. For one, ink geeks don’t like blotting as it can change the colour of their precious ink by absorbing some of it. Also by absorbing still wet ink, the latter does not have time to penetrate deeply into the paper fiber which can make the writing delible. But if your thoughts run faster than your hand, or if you like a bookmark in your notebook, a blotter is essential. And it is part of the ritual.

They come in three forms: the rocker blotter, the desk blotter and blotting paper in sheets. The former two were integral as well as decorative parts of a writing desk set. 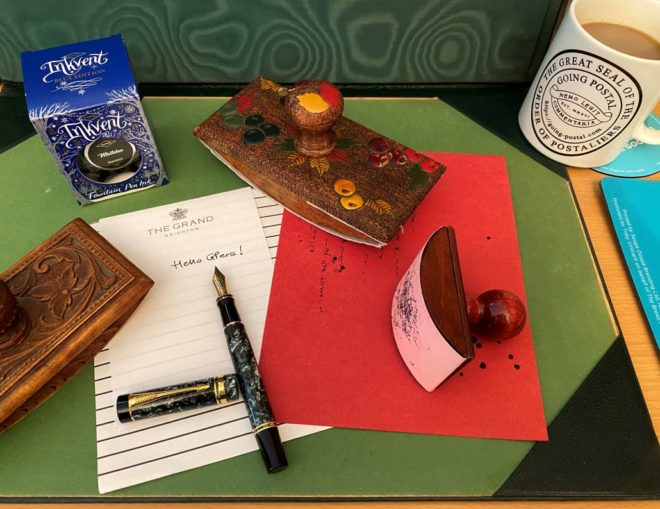 The blotting paper is said to have been invented in a paper mill in England at the end of the XVIIIth century. A number of GPers will remember how a sheet of blotting paper was inserted in exercise books and correspondence pads. When used to sponsor products, it was provided free. It was like a business card. The Americans used it a lot for advertising bank and insurance services. The French illustrated “buvards” remain collectable. Blotting paper, generally in A5 sheets, carrying advertising (or publicity as it was called, as well as propaganda) hark back to happier days and easier times.

They tell a story, or a joke. Some were risqué then, and some are un-PC now.

They remind us of another world, they are tinted with nostalgia.

Here is a selection, exclusive to GP: 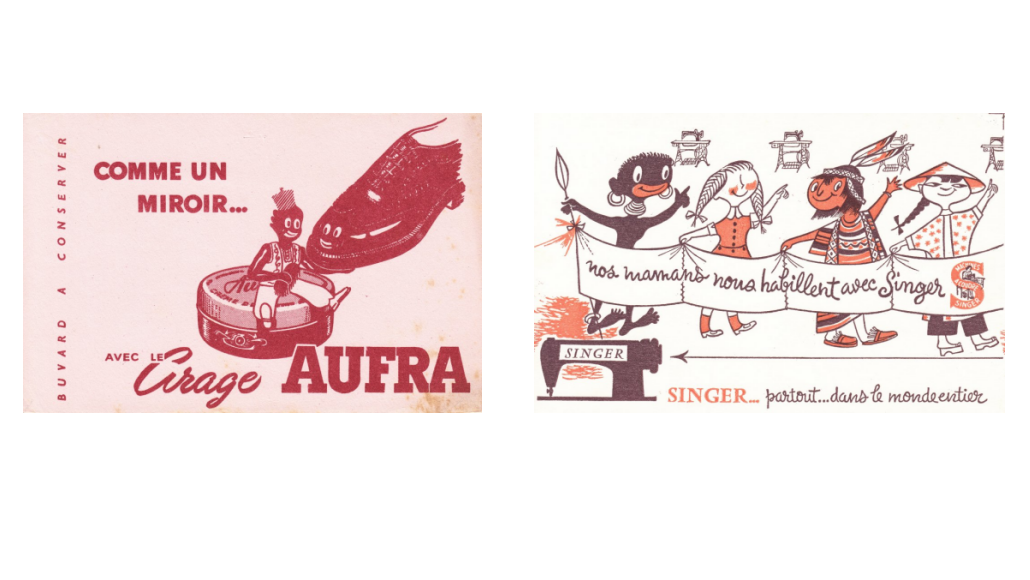 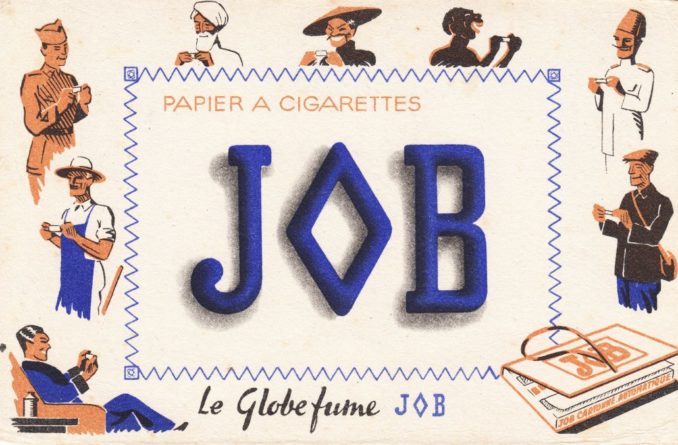 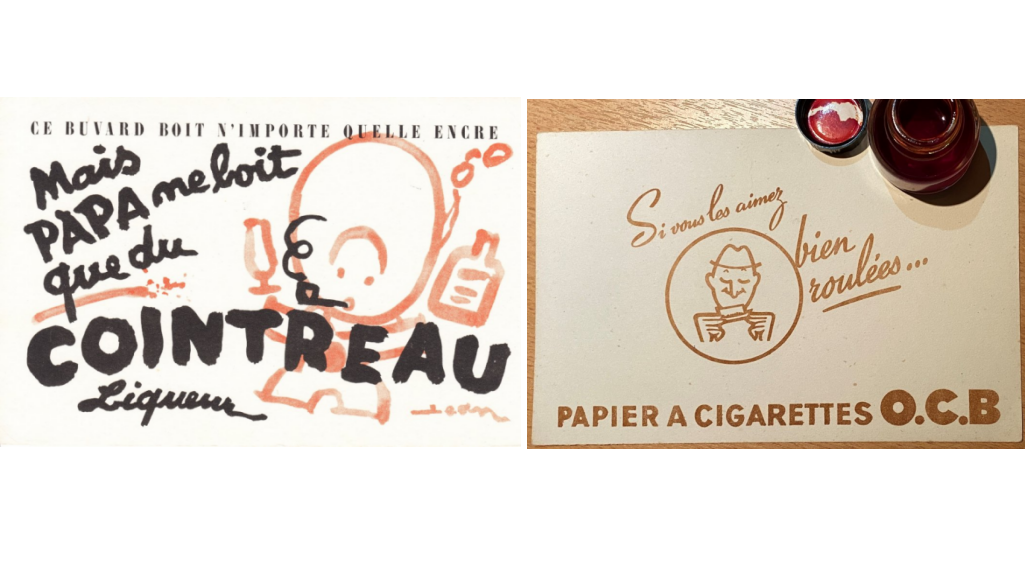 Un-PC / play on words: “This blotting paper absorbs (“drinks”) any ink but Daddy only drinks Cointreau!” + Ad for cigarette rolling paper: “If you like them (well rolled) curvy…”

It may seem trivial in the dangerous times we live in to take refuge in ink power but, under safe space arrest and in an ever-shrinking social world, deprived on a daily basis of basic liberties, one hangs on to sanity in any small way possible.

Also, with so much contempt in my heart for the so-called ruling elites, it’s safer to turn a poison pen letter into something more creative.

By contrast to the blotting sheets above, all featuring smiles, below is a photo of our time: In the run-up to Christmas, Selfridges is closed and a spray of disinfectant purports to help bring the capital city back to normal. 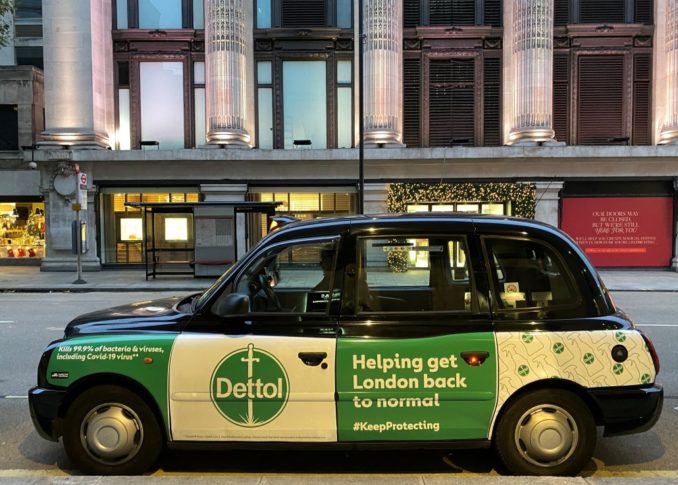 Capturing 2020 in photos, documenting the surreal around us, has been another way of dealing with it, another pressure valve but not as effective in relieving mental pressure as a brain dump on paper (“it’s right there on paper now, where I’m going to leave it”).

Ah! Just imagine the blotters the Ministry of Propaganda could have come up with using the current inane mottos, “Stay Home – Save Lives”, “Stay Alert to Stay Safe” and “Hands – Face – Space”…

The GP blotter slogan is more like “F*ck – this – Sh*t” and I write it in bold, underlined and I firmly press the blotter on the words.

2020, a write-off. It started well with the Brexit celebrations on 31st January. But it went downhill from there. The virus wreaking havoc with our lives and the swamp trying to cheat the world of President DJT – if only we could blot it all out. 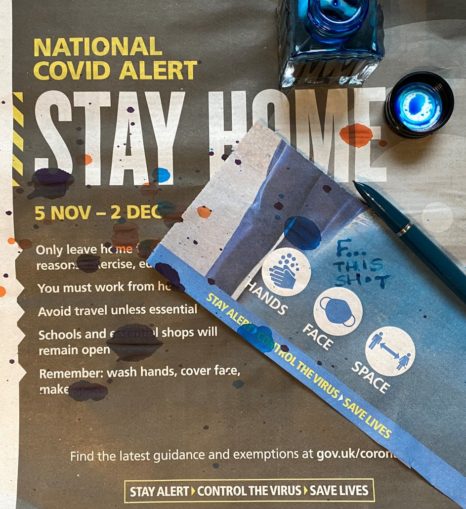 Book Review: Why the Germans do it better

Sorry. This is not a book review. See SB for a refund. But the title of the book in question is amusing. There is no doubt that, indeed, Germans do some things so much better [more…]

What Happened to British Trade Unions?

As a confirmed libertarian you might expect I am hostile to the concept of trade unions. Not at all. It is very libertarian to form a group to bargain with employers for better pay & [more…]

I enjoyed a most enjoyable discussion on the numbers with the informed, articulate & fragrant Rebecca Butler secretary to the Free Speech Campaign, last evening sponsored by Open Dialogus.  As a number crunching nerd myself [more…]