The tank is in place, the systems all built, the water and rock conditioned – the impurities are down to 2 or 3 parts per MILLION (nitrates, nitrites, ammonia and phosphate). Things were starting to grow on the rock – unidentified algae and such like, the pink coraline was also spreading, which was a positive sign.

Now anyone sensible would research which fish are compatible, which fit each niche, avoiding aggressive ones, checking the final adult size to ensure they won’t grow too large and exceed your ‘fish inches’ maximum.

First candidates were much more interesting than I expected – not fish, but invertebrates. These are usually a few types of creatures, which do not impact upon your fish inch restriction and help keep the tank in order. They may be eating algae on the rock and surfaces, or even dead creatures and parasites. The shopping list includes half a dozen hermit crabs, some very colourful shrimps and Astrea snails.

Add a couple of cowries and you have a vibrant bunch of characters and not yet started with the fish.  Watching the hermit crabs wander around is fascinating. Adding a few larger shells and if you are lucky you may see them house hunting as they grow – whipping from one shell to the other in a flash. 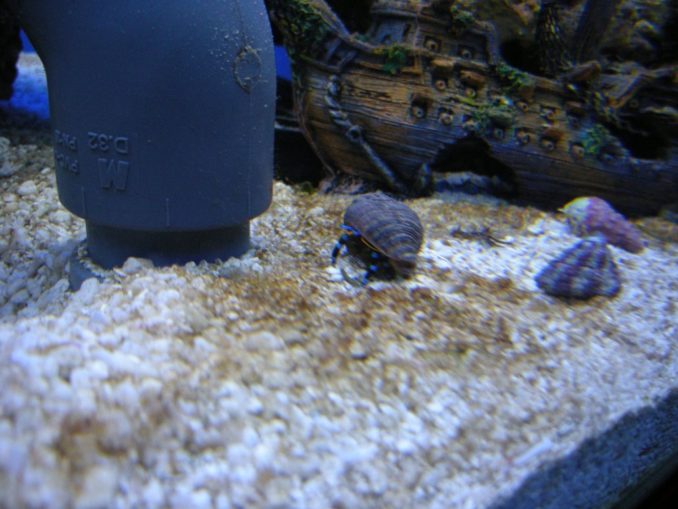 Cowries were large snail type creatures, they tended to be nocturnal but could travel quite a distance in a night. I still have the shells, each about the size of a tennis ball.

Fish – well the first had to be a couple of Clownfish, after all this was done around the time of Finding Nemo. 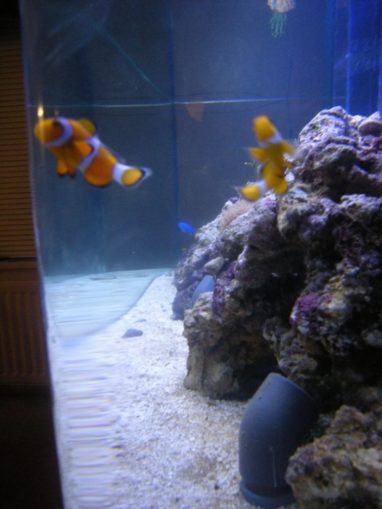 They are colourful and always moving around the front of the tank, so worthy regardless of fame. Another class to look at as premium fish are Tangs – you can have bright yellow tangs, we went for a Naso or lipstick tang, named for obvious reasons, and christened ‘Lilly Lipstick’.

We also had a sailfish tang – with the beautiful upper and lower fins and markings.

The third large fish, the last addition was a lemonpeel angelfish. I don’t have any photos of that one, but it is very much part of the video at the end of this article.  The blue fish were Chromis, looking quite fluorescent. 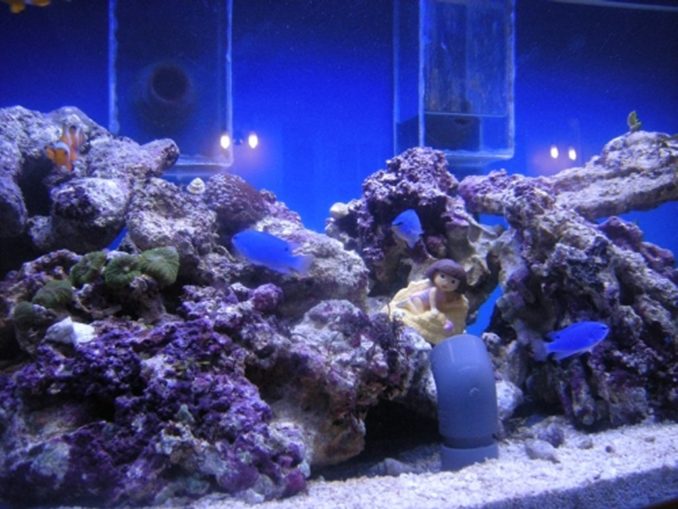 One mistake I did make was to get a Damselfish – looks innocuous enough but a right bugger, chasing the rest and stressing the tank. It took a bit of catching but was taken back to the shop. Other than that I was very lucky with the occupants – if they don’t like the surroundings they usually express that by dying on you. This lot were in no mood for such things.

Finally for this one, I’ve found a video of the tank at it’s prime – the pink coraline is populating the surfaces where I can’t clean and as you can see the coral and fish are looking fairly happy.

A shorter update this time, primarily due to other activites taking precedence – not weather related over the past weeks, but the Easter holidays threw routines out of the window. The eldest came home and [more…]

Give a man a fish

A poster asked a question about what would the assembled despicables of GP recommend as a hobby now the nights  are long and the weather foul. The most popular recommendation seemed to be railway modelling [more…]

With three baseboards built and fitted together and a fourth ready to go, we have a stable base for the layout. Yes, another two boards will be added later to give a full loop but [more…]