For those new readers who have not yet availed themselves of my first novel, A Coin for the Hangman (available at Amazon as a print or ebook version), I am prefacing this first chapter of the sequel with a brief synopsis of the earlier book so that you will be, more or less, up to speed. Please be aware that this is just the bare bones of the plot. The nuances, references and interactions of the characters provide the essential character of a story that resonates with much that we have lost for good or ill in this country.

Henry Eastman, son of local shop owner has been found guilty of his mother’s murder, duly sentenced and hung. While awaiting his execution he had written a diary detailing the lives of him and his mother during the war years, his own thwarted love for a kindertransport girl and the disaster – as he saw it – of the re-marriage of his mother (his father had died in 1939) to George Tanner newly returned from the war. Tanner is a wide boy, fixer and charmer and by chance he was one of the first British troops into Belsen concentration camp along with a fellow soldier Reg Manley. They were both psychologically damaged by the experience. Manley became an assistant to hangman Pierrepoint after the Nuremberg Trials and subsequently became an officially appointed hangman back in Britain in the early 50’s. It is he who is the chief hangman at Henry Eastman’s execution and to whom Henry, in his last moments, hands over his diary. In it he accuses George Tanner of the murder of Mavis Eastman. The effect on Manley is profound. He believes he has hung the wrong man.

The meaning of the title to this new story will be explained at the end of this first chapter.

The rain which had been threatening all day on his journey by train down from London had begun to fall in a heavy drizzle after he left the station and although his wide-brimmed hat protected his head and shaded his face he could feel the rain was now beginning to soak through the shoulders of his thin raincoat.  Opposite him, on the other side of the street, stood a shop that advertised itself with fine white lettering on the windows as selling tobacco, sweets and magazines. The name above the shop said “Tanners” and although it was only four in the afternoon there was a closed sign hanging on the inside of the door and the windows were darkened with opaque blinds that were drawn down almost to the base. The windows above the shop which, Reg assumed, opened on to the living area, had curtains draped almost completely across each of them which would only allow a little light to penetrate the rooms beyond.  There seemed to be no sign of life coming from any part of the building and Reg wondered if George Tanner had just upped and left the shop in the lurch after the dreadful events surrounding the murder of his wife and the accusations that had surrounded the execution of his step-son, Henry Eastman.

Three weeks before Reg had been called to give evidence to a Commission that had been convened in the light of the events at Henry Eastman’s execution. Reg had known that the governor of the prison would make a formal complaint to the Home Office concerning the mistake over the placing of the rope around Henry’s neck and the terrible scenes in the execution chamber so it was no surprise that he had received a formal letter a few days later calling him to an interview in a government office behind Trafalgar Square. He had arrived a few minutes before his appointed time and waited in a wood panelled ante-room that was sparsely furnished with a single desk by the door and a few chairs placed regimentally around the edge. At the desk sat a hard-faced woman who had sourly noted Reg’s arrival by placing a small tick against his name on a sheet that she had in front of her.

“Take a seat Mr.Manley. The commission will see you shortly.” The invite was brusque.

Reg sat on one of the straight-backed chairs and put his brief case on his lap. From the room through the double-doors in front of him he could hear a murmur of discussion but the sound proofing was good enough to mask any details of what was being said and by whom. Reg had noticed that there were names above him on the secretary’s sheet that had already been ticked but he hadn’t been able to see whose names they were or if they had already given evidence. He had spoken to Jim Lees – his assistant at the hanging – just the once on the phone and he was pretty sure that Jim was angling to try and protect his own back despite his assurances that he would back Reg up. They had worked out a spiel between them to the effect that it had been a chance in a thousand that the collar of Henry Eastman’s jacket had got caught in the eye of the sliding noose and because of the peculiarities of Eastman’s weight the drop hadn’t been sufficient to effect a break in the neck as was normal. Reg had been keen to impress on Jim that both their positions were seriously in jeopardy.

“If we both sing from the same hymn sheet, Jim, we might just get away with it.” Reg had insisted. “They’ll try and be clever and attempt to catch you out but so long as you stick to the story and don’t get flustered they won’t be able to make this an excuse to…” Reg had tailed off  “…well, you know what I mean.”

Reg knew only too well what it would mean and he knew Jim Lees knew what it meant as well – removal from the Home Office list of executioners. Reg had become proud of his expertise and saw himself as a natural partner to Albert Pierrepoint from whom he had learnt his craft. Although his livelihood didn’t depend on the paltry remuneration he received from the Home Office for each execution, to be removed from the list because of some mishap would be a personal affront and he knew that the gossip would get round in no time at all. He wouldn’t be surprised if Pierrepoint hadn’t already heard about it such was the infighting in the pro and anti-capital punishment camps within the government. To add fuel to the fire, John Christie had just been hung in the July and there were now rumblings that it was he who was responsible for the murders at Rillington Place and not Timothy Evans who had been executed some three years earlier. And, of course, the diary of Henry Eastman left to Reg by Eastman not only had the effect of re-opening the case, albeit very discreetly on the part of the police, it had also unsettled all those who knew about it – not least of them being Reg himself. His shock in the bungling of the execution and the revelations contained in the diary – namely that Henry had accused George Tanner, Mavis Eastman’s second husband, of being the murderer – had made the relations with his own wife, Doris, even more strained than normal. She had complained bitterly about his “hobby”, as she deprecatingly called it, before the execution of Eastman but now she wouldn’t leave it alone.

“I told you. I told you, didn’t I?” She flung the book in which he had kept details of all his executions on to the table in front of him. She jabbed with her finger at the black cover with its swastika logo in the bottom corner, a looted item from Reg’s time in Germany just after the war. “This was always going to come back and bite you.  Wouldn’t listen to me would you? No, oh no, always knew better didn’t you? Always going to give it up tomorrow, next week, next month. Our, no your, grubby little secret. Just what happens if this ever gets out to the papers? And it will. Oh yes, it will alright. You can bet as much money as you like that’s going to happen. Oh, mother of mercy, life will be unbearable!” She clapped her hands over her eyes and let out a wail that shocked Reg.

“Give it a rest, Doris, for fuck’s sake. You’ve been wittering on about it for days now and however you much you moan it isn’t going to change anything.” Reg had never sworn at his wife ever since he had known her but the bungled execution, the revelations in the diary of the hanged man and then the summons to what would amount to a court of enquiry had unbottled a sense of reckless frustration in him that he was now quite prepared to unleash on anyone crossing his path.

“Oh, that’s nice. Very nice, I must say. You’re not with your mucky friends now you know. The veneer of charm easily drops away doesn’t it?” The “veneer” was delivered with a wrinkling of the nose and a small drop of spittle appeared on her lips. Reg hesitated for a second.

*The white button is from Henry Eastman’s shirt that got torn off in the bungled execution. Reg Manley carries it about with him as a kind of memento mori. 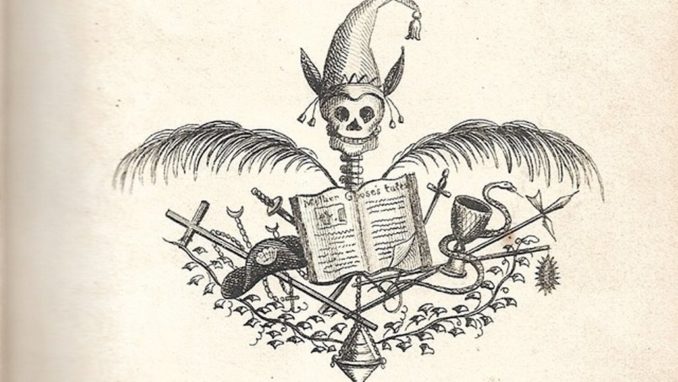 Back in the early 80’s I was in correspondence with an American author called Cornelius W.Grafton. He had written two crime novels in the mid 40’s entitled “The Rat Began to Gnaw the Rope” and “The Rope Began to Hang the Butcher” which I had only recently read and much enjoyed.  I sent a complimentary letter to his UK agent not knowing if the author was still alive. Some weeks later I received a response  from the author himself in Kansas to the effect that he was astonished that anyone had remembered his books – he stopped writing altogether in 1951 – and that it brought him much cheer that long after the royalties had been received and spent readers were still finding his stories. We corresponded back and forth for a couple of years before I finally received a letter and a book from his widow to say that Cornelius had died at a church service some weeks earlier and that he had wanted me to have a copy of the one book that never made it to the UK. It was signed in absentia by his widow and she added an epilogue: “Did you know Cornelius’ daughter has a new book out very soon?”  It was “A is for Alibi” by Sue Grafton who went on to complete 25 of the 26 “Alphabet” murder novels before she sadly died.

I was trying to think of a suitable title for the second novel and it suddenly struck me that it would a fitting tribute to C.W.Grafton and the imaginative seed he planted in my writing career to entitle the book from the third line of the children’s verse from which the first two of his titles were taken. Hence “The Butcher Began to Kill the Ox” and because it also fits so wonderfully into the plot.