Early shift Postaliers may have noticed that lately I have joined their ranks in contributing to the comments that no-one reads. Following the death of my beloved Schnauzer, Hattie, I have, quite unexpectedly, been granted a new lease-of-life.

Each day begins early, with a dog that’s eager to go, and along with her owner, keen, indeed inpatient, for the day to start.  At 06h30, the alarm goes off, and out we go into our garden, her to pee and pooh, me just to pee (outdoor defecation being as yet, for me, a step too far, even in my own garden).

All of this has been quite unexpected. When Hattie died, my world threatened to go to pieces. For six years, this little dog had been my lifeline, a living link to the most important part of my past, and a reason to get up in the morning.  As she aged, we grew closer together, and I stopped thinking of her as my sister’s dog, and she became my own. As time went on, I loved her more and more, and she returned that love in spades. She was a great little dog, and I will always miss her.

In some ways, I took her for granted.  I thought she’d live forever. I certainly hoped she would. In some ways, watching a much-loved dog growing old is like having the brakes on your car gradually fade. You don’t realise it’s happening, you don’t want to admit it’s happening, until it’s nearly too late.

I knew I would have another dog, and yet, I didn’t think that this would be so soon. 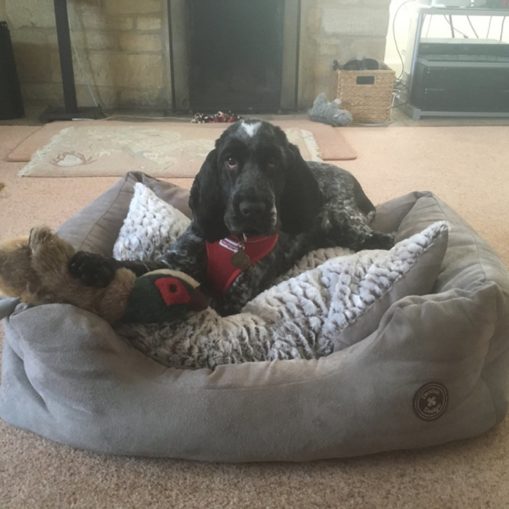 Three months ago, almost to the day, I drove a close friend of mine, together with her sole surviving dog, a 14 year old spaniel, and my own dog to a breeder to introduce them to what became her new dog, a beautiful 11 month old Blue Roan English Cocker Spaniel bitch. I drove us all back home, so that her new dog could sit on her knee and start the bonding.

Three months and a few days later, my friend drove her dogs and me out to collect my new dog. My new dog, Maggie, sat on my knee on the way back.

There is a near perfect symmetry to this story; the day after my dog died, my friend suggested I called the breeder that hers came from, on the off-chance that he knew of someone who had a similarly-aged dog (I didn’t want a puppy).

I humoured her.  Thank God I did – I nearly didn’t.  It turned out that he had a yearling, a show dog that he hadn’t even been planning to move on. He only entertained the idea because I’d met him three months earlier, thus establishing bona fides.

She’s half-sister to my friend’s dog. It could not be better. Every morning they play together. 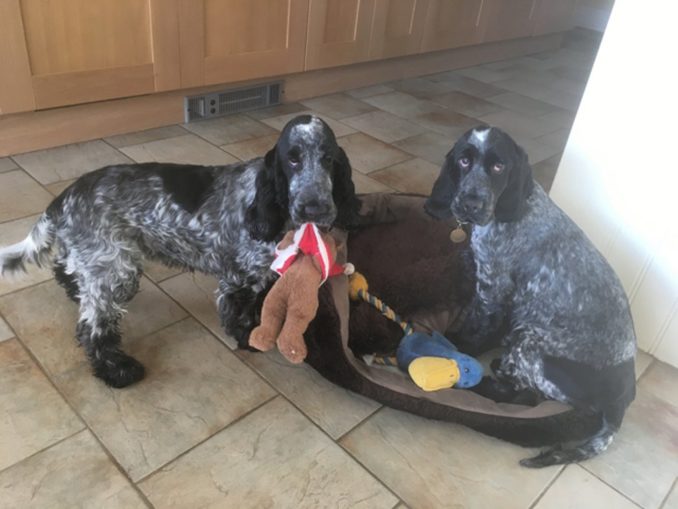 She is smart, polite with other dogs, polite with people, occasionally naughty as she grows in confidence.  She loves her new home life, after 13 months of kennel life, and as well as the breeder has treated her (and it’s obvious she’s been very well looked after).

I am lucky living where I do, in a village with many dogs and dog owners.  I’ve been shown much kindness, from many people.

There’s something wonderful about skipping puppyhood, watching a dog on the threshold of adulthood gaining in confidence and experience, and moulding that dog to your lifestyle, adapting to each other’s foibles.

From the start, off-lead walking has been easy; with her walking ahead and constantly looking back to see where I’m at (“good check!!!”).  On lead has been more problematic, but after two weeks we’ve got to the point where she’ll reliably walk slack-leash on known ground.  “Sit” and “stay” took about five minutes each.  She’s smart. She wants to please.

She goes bonkers at feed-time.  She’s intensely food-oriented. Feed times are the only times she’s really challenging, but it’s manageable, and day-on-day, she gets better.

As she grows in confidence, she tests me, which is to be expected. As a gun-dog in pheasant season, she’ll occasionally catch a scent and go selectively deaf. In the past five days, I’ve whistle-trained her, and so far, she’s 90% reliable on this method of recall.

She’s a real homebody. After 13 months of kennel life, she craves her new home.  She’ll frequently want to make for home just as we set off on a walk.  It’s almost as if she’s thinking that she’ll never return, each time we go out. She can’t wait to get back, to be back home. Just like Hattie, she’s quicker on the return journey. Sometimes, I have to run to keep up with her, or put her on the lead.

Sometimes, this similarity between the new dog and Hattie in her dying days un-nerves me, and gives me a moment of pause. When I see her wanting so much to be home, it’s almost as if she’s caught a little part of Hattie’s spirit, and a part of my sister’s spirit, too.

I am not remotely religious or particularly sentimental, and yet, yet I want it to be true. God, how I love them all. 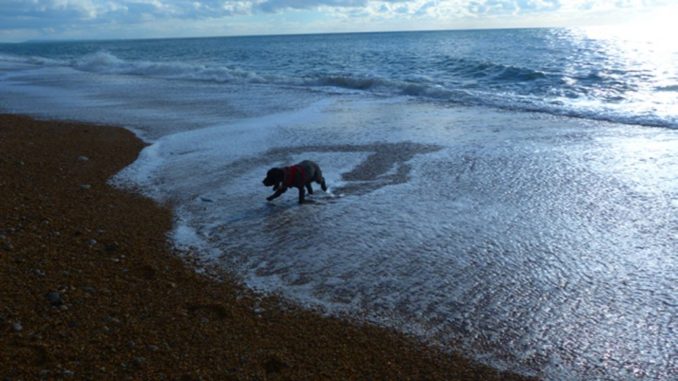 Life is good.  Life is worth living again. What a difference friendship makes in your life.

I started this piece last Sunday night, after the event, and was intending to finish it up and send it to Swiss Bob early in the week. But we all know what happened next. On [more…]

If there was a time when there was no Life anywhere. In the whole Universe. Was there then a magic moment? Let’s say there was, for Earth. Earlier in time the very simplest things were [more…]