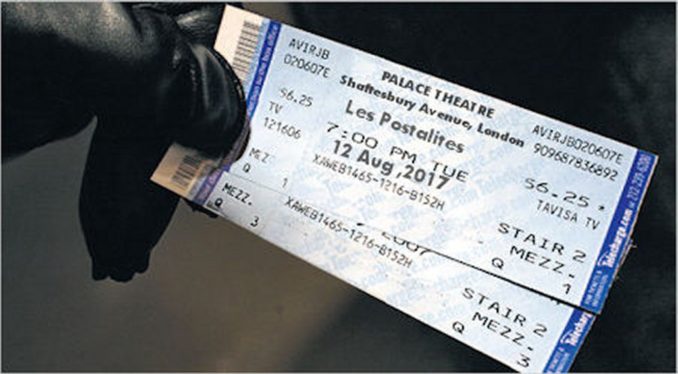 Coming from a family with an ancestral musical heritage I was taught to appreciate all types of music and although I can’t hold a note or play an instrument, unlike other members of my extended family who include opera singers and musicians. I was able to differentiate between good and bad production at an early age. As a child, I was treated to pop and classical concerts plus trips out to West End musicals and films, such as South Pacific, The King and I, West Side Story and others (at the ages to 8 – 10 maybe treat was an overstatement, but staying out late and the intermission ice cream was certainly appreciated).

These excursions to London did provide the seeds to allow me to enjoy such musical productions as an adult, and I’ve seen productions such as Blood Brothers, Miss Saigon, Me and My Girl and Return to the Forbidden Planet. I was unable to see one musical based on a story by Victor Hugo because of work and other commitments.

Late May, my work life demanded I visit a customer based in Pentonville Road, not far from Islington High Street. So rather than drive into London I caught the train into Kings Cross and got the tube out to the Angel. After my meeting, while waiting for a train back to Kings Cross I noticed an advertising poster for a West End musical that was coming to the end of its run. Great I thought, a musical based on the show that I missed all those years ago, and now with an up to date story, music and lyrics.

What would you have done, if like me could now spare the time and afford tickets?

Well I phoned the theatre ticket office there and then, booking a pair of decent seats for a weekend performance, paid with my credit card. 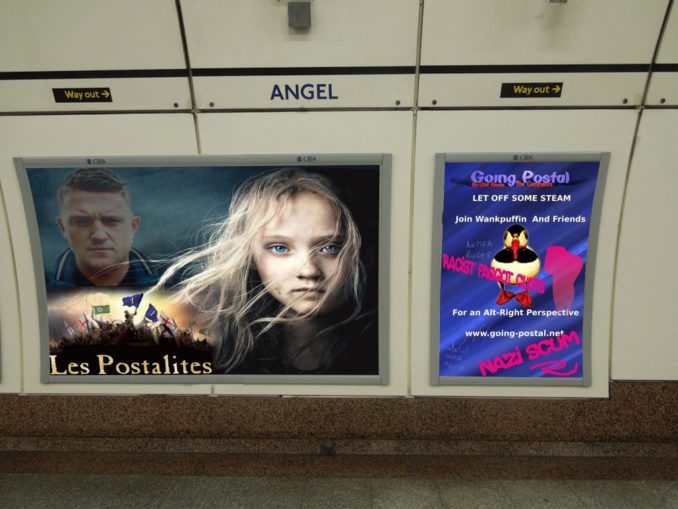 Most successful West End musicals tend to have tragic story lines, and this show was no exception, based on that same story by Victor Hugo.

In 2017 Luton, convict Tommy Robinson is released on parole by police sergeant Cressida Mydick after serving a 19-months of a 4-year sentence for speaking out about Muslim paedophiles as well as repeated escape attempts. After several months of drifting around England, Tommy is offered food and shelter by the Reverend Bastard, but uses the reverend’s PC and Twitter account during the night to warn followers of a greater Muslim threat to London. He is caught by the authorities, but the Reverend Bastard lies by saying that the Twitter account must have been hacked and that Tommy had no access to his PC or the Twitter account, so securing Tommy’s release. Touched by the Reverend’s grace and generosity, Tommy breaks his parole and vows to start new life using a new Twitter identity. Sergeant Mydick swears she will bring the escaped convict to justice.

Three years later, London is an Islamic Kalifate ruled by the tyrant Kant, Tommy has become a wealthy author, newspaper proprietor and mayor of the small free-town of Basildon.
A young woman named Joanna, one of his workers, is discovered to be sending money into the kalifate for her illegitimate daughter, Barbie, who lives with the unscrupulous Lord & Lady Emily Nugee and their daughter Boudica, and is dismissed by the foreman (Judas).

Left with no alternative, Joanna turns to prostitution. During an argument with an abusive customer, Mydick, now a police inspector, arrests Joanna, but Tommy had heard about Joanna’s unjust dismissal and current predicament, so intercedes and takes her to a hospital where she is diagnosed with terminal AIDS.

Later, Tommy learns that a man believed to be him has been arrested. Unable to condemn an innocent man, Tommy reveals his identity to the court before departing for the hospital. There he promises to a dying Joanna that he will look after her daughter. After Joanna dies, Mydick arrives at the hospital and attempts to arrest Tommy. But Tommy escapes and finds Barbie at the Nugee’s Takeaway Kebab shop/Brothel. Tommy bribes the couple to allow him to take Barbie away.

After Tommy confides in Barbie about her mother passing away, he promises to be like a father to her. Tommy makes contact with the Reverend Bastard who agrees to give him and Barbie new identities to hide from the Islamic authorities.

Three years later in June, Ken Livingstone, the only Kalifate official sympathetic toward the plight of the indigenous Christians, is nearing death. Postalites Kipper Marius and Bob Swiss, together with street urchin Poofta Rotherham, discuss fomenting a revolution to overthrow Kant’s Kalifate. Later Kipper catches a glimpse of Barbie, now a young woman, and instantly falls in love with her. Meanwhile, despite Barbie’s questioning, Tommy refuses to tell her about his past or anything about her late mother, Joanna.

At a café, Bob Swiss organises a group of idealistic Postalites as Livingstone’s death is announced. Meanwhile, Boudica, now Kipper’s friend, leads him to Barbie, where the two profess their love for one another. Lamenting that her secret love for Kipper will never be reciprocated, Boudica fatalistically decides to join the revolution. Later, an attempted robbery of Tommy’s house makes him mistakenly believe that Mydick has discovered him, and he flees with Barbie. As they leave, Bob rallies the Postalites to revolt, and Barbie sends a farewell letter to Kipper.

The next day, the Postalites interrupt Livingstone’s funeral procession and begin their assault. Mydick poses as a rebel in order to spy on them, but is quickly exposed by Poofta and captured. During the ensuing gunfight, Boudica saves Kipper at the cost of her own life, professing her love to him before she dies, which leaves Kipper devastated at the loss of his best friend. Tommy, intercepting a letter from Kipper to Barbie, goes to the barricade to protect Kipper. After saving Bob from snipers, he is allowed to execute Mydick. However, when the two are alone, Tommy chooses to free Mydick instead and fires his gun to fake the execution. Initially disbelieving, Mydick wonders at Tommy’s generosity.

With the majority of the Londoners not joining the revolution as the Postalites expected, they resolve to fight to the death setting up barricades on Tottenham Court Road and Oxford Street. Everyone is killed by Kant’s Islamic thugs in the final assault on the street barricades, but Kipper is saved when Tommy drags his unconscious body into the sewers. Emily Nugee, scavenging the dead bodies, steals Kipper’s ring. Tommy recovers and escapes the sewers carrying Kipper, but is confronted at the exit by Mydick.

Mydick threatens to shoot Tommy if he refuses to surrender, but Tommy ignores her. Unable to reconcile the conflict between her civil and moral duties, two things which she always considered the same, Mydick commits suicide by jumping off a bridge into the river Thames.

Later, Kipper mourns for his friends but Barbie comforts him. Revealing his past to Kipper, Tommy tells him he must leave because his presence endangers Barbie, and makes Kipper promise never to tell her. A few months later, Kipper and Barbie marry; the Nugee’s crash the reception and testify that they saw Tommy carrying a murdered corpse through the sewers. Emily Nugee unwittingly shows Kipper the ring that she stole from him as “proof.” Recognising the ring, Kipper realises that it was Tommy who saved his life. Kipper and Barbie rush to Tommy after being told his location by Emily Nugee.

As Tommy sits dying in the Inn ‘1641again’ from his long-term heart condition, he perceives the spirit of Joanna appearing to take him to Heaven. Barbie and Kipper rush in to bid farewell. Tommy hands Barbie his confession of his past life, and the spirits of Joanna and the Reverend Bastard guide him to paradise, where he joins the spirits of Bob, Boudica, Poofta, and the other Postalites at the Barricade on the Tottenham Court Road.

My thanks to Tachybaptus for the inspiration. (Maybe, just maybe Tachybaptus will rewrite the story and it will become a long running play)

My thanks to all you Postalites for writing articles and comments I never read, and some of you for using names that could be included in the show synopsis.

Postcard from Mexico, No 1

Fauna of Quintana Roo, Yucatán Peninsula. On land along with the tarantulas, scorpions, snakes, iguanas, howler monkeys, agoutis and raccoons. Troops of Coatis (Coatimundi) are one of the more endearing animals to be seen in [more…]

Moonlighting as a DJ

For a large part of my twenties, I lived a double life. By day I worked on the farm or as a tree surgeon, and sometimes even in an office. I would play football and [more…]

As a keen guitarologist I simply love playing the electric guitar. But pressures of family life and work mean I cannot really commit to being in a band again; practice 5 times a week then [more…]