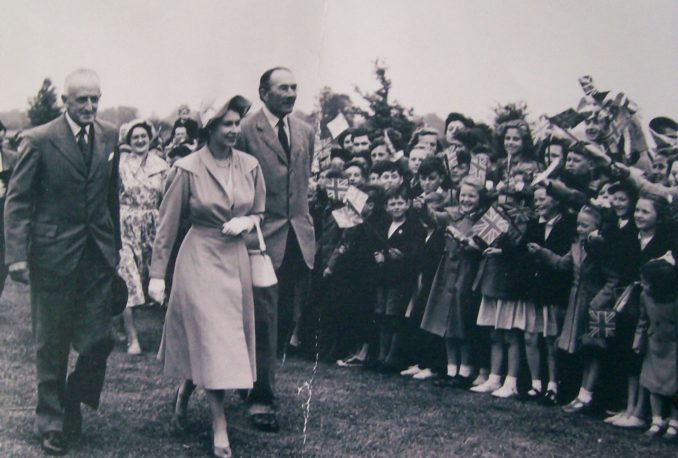 Change has always come slowly to rural Wiltshire, in 1957 the 1944 Education Act hadn’t affected my schooling to any great extent. The school I moved to after the infant school was one that took children through from the age of eight to their fifteenth birthday, the age then when children could leave school. Those who did not pass the eleven plus exam stayed on at the same school. Shortly after I moved on to grammar school a new ‘Modern School’ was built on the bleakest and least accessible, by road transport, spot that could be  found locally

The school was next to the church and alongside a river with its well used footpath, there was no rule about going into the churchyard other than to respect the place. The church porch was a place to sit quietly out of the way or you could enjoy the shade of the big pine trees. I didn’t realise then that some gravestones named my ancestors. The church was part of school life, as there was no school hall we used the church for any assembly or get together. The huge old yew tree that we passed by on our walk to school predated the eleventh century church by a millennia or two.

The public footpath to the riverside walk passed between the school  playground and the church. There was no fence or wall, people would come and go about their daily routine and often stop and chat or dash quickly through to avoid being caught up in a game of British Bulldog in which the church wall was a place of refuge. The wall was capped with local stone slabs, worn smooth by generations of children scrabbling around on them and bearing the initials of children, past and present, carved into the stone by means of a penknife or iron nail. There is a great sense of continuity in such things; the yew tree, the church, the graves, the initials. Even as children we could sense the flow of history and the safety and reassurance that these things gave.

There was no dining room or kitchen so at dinner time we trooped, in a crocodile, the  sixty yards or so to the function room of the nearest pub. There we were dished up food from containers sent from the central kitchen about half a mile away. The kitchen had a large garden area behind which was used as part of our education, we would walk out to the gardens, put on leather-upper, wooden-soled clogs and get set to digging, weeding and planting. The crops, or what crop remained un-trampled or uprooted by over keen schoolchildren set to weeding, augmented the kitchen supplies.

The school had no provision for hot water, there were a few cold taps in the cloakroom area and the only heating was by cast iron ‘Tortoise’ stoves fuelled by coke. Handy for heating the free milk in winter to add to cocoa powder and sugar we took in but fairly useless at their main job of heating a classroom. The toilet provision was rudimentary, there was a urinal for the boys, draining I assume into the river, and ‘Elsan Chemical’ toilets for bigger jobs and for the girls. I mentioned the churchyard earlier, it was there we all rushed, gasping and gagging when the emptying crew arrived with their little tanker truck into which they poured the Elsan contents through the lidded top hatch. Those chaps certainly earned their money or perhaps they only hired men with no sense of smell.

Memories from the first class include writing out ‘consequence’ fifty times because I got the spelling wrong in the weekly test and making paper flags for the Queen’s visit to a town nearby. I’ve always been a fair draughtsman and copyist, never an artist but handy with a pencil or paint brush. For days on end I drew out and painted union flags, St George’s crosses, Scottish saltires and those wretched fiddly Welsh dragons. I can’t recall doing anything for Northern Ireland.
I see from a note on the back of the photo below that the visit was 3rd of July 1952 although I think it was 1953. The flags in the photo are not mine, I was carefully tutored in the offset of the red saltire of St Andrew and  the correct way of flying the flag. The photo was taken at a village a few miles from the event that we attended that day, some the children there were my classmates when we all moved on to secondary school.

Our desks in that school were the old Victorian cast iron type, they seated two pupils, they had ornate cast iron frames and oak tipping seat and sloping writing surface complete with inkwell hole and pen holding groove. As I was about to leave the school to go on to secondary education the school got rid of those from throughout the school and bought ‘modern’ single pupil desks of tacky bent tube and plywood tops, and chairs of the same construction which always seemed to be in the way.. The old desks were smashed up, the iron going for scrap and the oak recycled through the woodwork class that the ‘staying on’ kids had in a workshop in the High Street. I’d like one of the old desks now, they fetch a great deal of money. In a similar vein, the man who married the angel that first taught me was a teacher at the junior school, he was selling his car for £5, an Austin Seven. Oh for the gift of foresight, a few hundred pounds and a big barn for storage ! Both me and Rodney could be miwionaires.
I was ink monitor when I got into the ‘eleven plus class’ the ink was mixed from powder and you were supposed to mix in a certain proportion but a few more spoonfuls of powder made for a better ink. The chap who taught us bought a big bottle of proper ‘Quink’ in a beautiful blue rather than the blue grey of the mixed stuff, if you made a reasonable job of your handwriting you were promoted to be a user of the ‘special’ ink. Good teachers put in the extra mile to get results. I can’t remember his name now, he came from Jersey and was an inspiring teacher, always pushing, questioning, praising and given to spontaneous rewards, a new pencil here, a few sweets there, and in my case a thick quarto sized notebook in which to make my aeroplane sketches and notes.

Preparation for the eleven plus was a series of mock tests, there were booklets that could be bought through the school for use at home but, being from a family of by now four boys and another sibling on the way, even asking for the money to buy them was out of the question. I managed to pass in any case although years later I was told that the place at grammar school was due to my very good results in the IQ test papers rather than my less than impressive score in writing.
In the ‘slack time’ after taking the exams I was set on the task of teaching a lad from the ‘stayers on’ how to read. In those days I first formed the idea that I’d like to be a teacher, in those days you may as well have dreamed of being a prince, teachers seldom came from the working class. The war had changed that a little as teachers were coming in who had retrained as teachers when leaving the forces.

Our headmaster was another inspiring teacher, he use to teach us art when not herding the stayers-on into some sort of order. He was inventive in the use of materials and made sure you could follow what strengths you had; I spent hours on calligraphy and lettering, others could slosh powder paints about. We made papier-mâché plates to decorate and in conjunction with our geography lessons, models of Antarctica as part of the International Geophysical Year of 1957-58. The headteacher used to tell stories that he made up himself as we worked. He was ambidextrous and showed off by writing a phrase simultaneously with paper under each hand. He was as happy to write backwards as he was to write forwards, he could write forward with one hand and backwards with the other or both the same way.

Teachers were more able to teach in those days, good behaviour in class was a given, not something that had to be established afresh in each lesson, everyday. One punishment I remember, as it was so rare, was the caning of some of the older lads who had thought it a good idea to run the cricket roller into the matchwood walls of the pavilion at the local playing field. The ‘hard lads’ were not so hard after all when they had the cane across their palms in front of the assembled school. There was blood, and tears.

The playing fields were a few minutes walk away, we went there occasionally to play football or to practice running for the area sports. Most exercise was taken in the playground, they were days where, on frosty, icy days, the staff retired to the warm of the staff room while we made slides. They realised that no one would end up in the river, the solid stone wall would dash your brains out before you reached it. In extremis, where there was blood, they could be persuaded to cut a piece off the big roll of sticking plaster they kept in a box in the staff room, it was doled out with a message of ‘serves you right for being silly/reckless/stupid/careless’ or some other sage comment.

The intake of the school was from working and middle class, sons and daughters of farmers along with those of farm labourers, tradesmen and artisans and a couple of military types too sent there children there. You had a choice of school, you could send the child to the local school or pay for him to go to a private or public school, or you could move to the catchment area of another school. There was little ‘diversity’ in those days, the only ‘diverse’ character was one of my pals who was a result of a meeting of his mother with a black soldier from Patton’s Third US Army who were briefly stationed nearby in the build-up to D-Day.

I can’t remember all of my classmates but can recall that, thanks to the efforts of our teacher, over half of my class passed the eleven plus and went on to grammar schools. The others went on to work at the age of fifteen, many took apprenticeships and ended up with their own businesses years later. It was a time when children took six or seven years to reach adulthood, working with adults, having rough edges knocked off by adults, learning how to be one rather than having instant adulthood thrust upon them on their eighteenth birthday with no training whatsoever.

I’ve collected wood block and linocut prints for years, it is a cheap hobby, competently done prints can be bought for a few pounds whilst coloured prints by famous artists can run to hundreds of [more…]

“Say not thou, What is the cause that the former days were better than these? for thou dost not inquire wisely concerning this.” Ecclesiastes- 7:10 When we arrived in London in the early 1960’s, I was put [more…]

I lived for the first seven years of my life in a hamlet on the western fringe of Salisbury Plain. At about  six hundred and sixty feet above sea level it was a fairly bleak [more…]