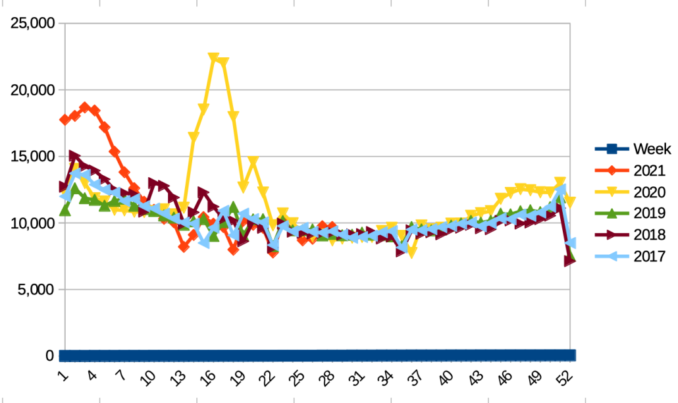 The graph shows the official ONS weekly death statistics (google ONS death statistics) from 2017 up to now. I can never remember which axis is X and which is Y so the bottom line is the week number and the number of deaths is on the left. I might have to see OT after class for that admission.

These numbers are total deaths, the deaths per million might show some differences but what you see here is just raw data.

Apart from April 2020 and January/February 2021 the lines appear remarkably similar. The 2020 aberration is possibly when they were bumping off care home residents (80% of those deaths were over 70 years old). The January 2021 figures are a bit puzzling. December 2020 was in the 11 to 12 thousand range. This suddenly shot up to over 17,000 in January. Did they fall behind with the paperwork over Christmas, I have no idea.

I am convinced I had Covid in October 2019 when many people were complaining about a nasty flu going round but there is little in the way of a big spike in deaths.

rNHS basically shut down for over a year but there is no increase in the number of deaths, we all remember when people were arrested for filming empty hospitals. From this we might be allowed to wonder if rNHS serves any real useful purpose other than employing lots of people.

Any claim that the vaccines have saved thousands of lives must also be taken with a large pinch of salt, where was the increase before they were widely taken up ?

are we to believe that people don’t die on Bank Holidays or they ignore the data, it is yet another puzzle.

It is now even more obvious that the reason the lying toerags switched from deaths to cases is because the deaths stubbornly stayed much the same as usual. How many of us believe the case numbers anyway, they apparently make them up to suit their purpose and that is without mentioning variants that they claim to identify as soon as they appear. Pull the other one.

It will be no surprise to most puffins that we have been subjected to a monumental scam and the authors of it have no idea how to get out of it without admitting what they have been up to.

Whatever happens, it will all be our fault as usual.

We reach August 1940, eighty years ago. Things still looking bleak for the Brits and it doesn’t really improve this month and we moan about the lockdown, albeit with some justification. The Italians had been [more…]

The idea for this came from some bar steward who read a comment I had made, imagine that , people reading the comments, perfidy I tell you. Anyway it seems the Morgenthau Plan may not [more…]