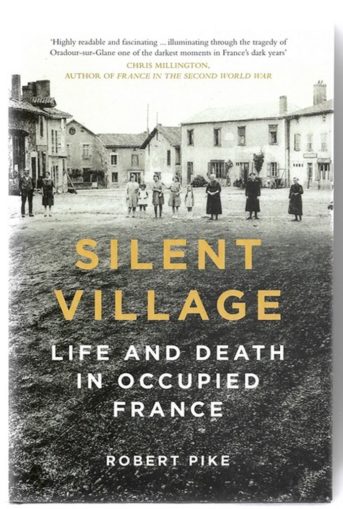 There have been a number of books on the disaster that overran Oradour-sur-Glane on Saturday June 10th 1944 but this is the first one that I have read that finely details the lives of the people who lived in this rural village nestling in the Haute-Vienne area of Vichy France. The nearest large town is Limoges, 14 miles away to which it was connected by a tram which trundled through the countryside taking approx 75 minutes for the journey. People from Oradour travelled into Limoges for work and at weekends the town dwellers would come to the rural retreat for a drink and a meal at one of a number of restaurants in Oradour.

The book’s opening pages show us the maps of the town and its surrounding area, the timeline running from 1906 through to 1983 outlining the significant dates and finally six pages of what the author denotes as “the cast”. These are the names of the inhabitants of the village who we will encounter in the book as they work, live, marry and die and who, in a few instances, were serendipitously absent from the Oradour on June 10th  – and others who, by ill fortune, travelled in on that day and were caught up in the holocaust. The pages of the book are dotted with poignant photographs showing village life of the 30’s and early 40’s – marriages,  owners standing proudly outside their shops and cafes, the village band, young couples dancing. We view them in the full knowledge of what is to befall these innocents and that knowledge makes these photos doubly disturbing.

The author really picks up the story after the First World War when 99 of the men of Oradour and the surrounding villages did not return having been slaughtered on the fields of Flanders. Those that have returned would be either scarred physically or emotionally damaged. The author begins to unravel the petty rivalries  – the right-wing mayor being ousted by the communist who in turn is removed from office after a scandal involving shoes – and how the community of some 650 souls begin to pick up the pieces of life after the war. Essentially Oradour was a rural community dependent on the farms surrounding the village. Cattle, sheep and pigs kept wheels of the society nicely greased and the women developed a cottage industry in hat and glove making. Younger members of the village either went to school there – and the surrounding hamlets would ferry in their own children into Oradour – until the age of 14 or so and then would join their parents in farming the land. Those youngsters with more ambition would get the first tram of the day into Limoges and pursue a job there before returning in the evening. Some might find lodgings in Limoges for the week and return on Friday night or Saturday morning to spend the weekends with their parents. It is unfortunate, in the extreme, that they would be there on Saturday 10th June 1944. On any other weekday they would have still been in Limoges.

So we follow the lives of the villagers through the 30’s and the arrival of refugees from the Spanish Civil War who, it would appear, were taken into the community with some degree of reluctance but not with any outright hostility. Some moved on, some stayed within the area and some were to be burned alive in the conflagration of the church that Saturday. The same fate was to befall a number of French refugees from the Occupied zone of Paris and other areas such as Alsace-Lorraine.  Oradour and the area surrounding was seen as quiet, tucked away and unlikely to be harassed by Germans. Indeed this was the case throughout most of the war. The only uniforms likely to be seen in Oradour were those worn by the miliciens, those French who took sides with the Germans and who would report any clandestine activity to the authorities. Not that there was any or much Resistance activity going on in Oradour or the area. The villagers were mostly intent on getting on with their lives unhindered by the Vichy government and below the radar of any German activity.

Which makes the massacre of the 643 inhabitants and the destruction of their whole village on June 10th by SS Panzer Division Das Reich led by Adolf Diekmann all the more of a puzzle.

The author details the massacre hour by hour and we discover the fate of all those who we have got to know through the earlier pages of the book. Women with their babies and children herded into the church, men separated and taken to various barns around the town square. All of them totally unaware of what was about to happen. Those in outlying hamlets who could hear rifle fire coming from Oradour and who worried about their children who had been dropped off earlier in the day for Saturday morning school. Those who inadvertently turned up on the tram from Limoges at just the wrong time. The author has interviewed those who survived – just five – and those who had relatives murdered at Oradour. The placing and timing of events is meticulously described

Sadly, in the aftermath the investigation into who precisely was responsible – apart from Diekmann who was killed in Normandy a couple of months later – was hampered by inaction and an unwillingness to uncover the part played by French miliciens and French men from Alsace Lorraine who had been seconded into German SS divisions. At least two of the survivors recall hearing the “German” soldiers speaking immaculate French in a patois distinguishable as Alsacien.

I can thoroughly recommend this book to GP readers. Even if you know the story already the author has managed to bring to life those unfortunate and innocent villagers through their backstory and which makes the end even more horrific. The village can still be visited today and had remained untouched ever since the massacre.

The second month in 1941 was not up to the joys of January for the Allies. The Germans started arriving in North Africa and the push into Libya did not go much further. There was [more…]

This is a review of the Golf 7 GTI, not the new Golf 8. Ominously, the Golf 8 is advertised as being “all digital”, as though that were a good thing. However, the car reviewed [more…]