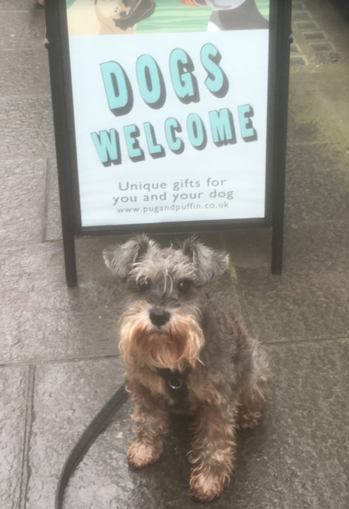 Before she was mine, she belonged to my dearest friend, my sister.  Just before she died, she asked if I would take her in, and I told her that I would (I’d already decided to, a while before and to this day feel bad that I didn’t declare earlier).   That was six years ago, when she was seven and a half years old.

For these six years, while at times driving me to distraction, she has kept me sane, in a world that is going mad.  She’s not the dog I would have chosen for myself, and it took a while for us to adapt to each other, but we both did adapt, and it worked out very well, for both of us, as my sister knew it would.

We’ve seldom been apart these six years.  Everywhere I go, she goes, on long walks, to the pub, to our friends’ houses near where we live, to the shops.  She’s met several Postaleers, has travelled to certain events in Manchester, Birmingham and London and has even met someone particularly beloved of us here on Going Postal, if not by Paul Staines and his chums in the lamestream mainstream media.

Suddenly she’s thirteen and a half (or ninety-four-and-a-half, in dog years, if you believe that old adage). When she was just thirteen, no-one would believe she was that old, but the in the last six months there’s been a sharp, steep decline, which has caught me by surprise, even though I knew it was inevitable.

It doesn’t seem that long ago that we’d regularly do five or more miles each day, over hilly terrain. But at some point within the last year or so came the first signs that she was slowing down.  First a decline in agility; over a short time, she became unable to get into cars unassisted, where she was previously confident enough not only to get in, but also to know where she was to sit in which car. Then, earlier this year, she went deaf, probably in the space of a couple of months.  But she was still up for long walks and long trips to the pub.

Then came the summer, after an intolerably muddy winter, there being no spring this year.

The main symptom of kidney failure (aka renal insufficiency) is excessive water intake, and close behind this is sudden loss of appetite. Because we had such a hot summer, the first symptom was masked – I assumed she was drinking more for the same reason that every dog was drinking more…it was bloody hot.  The second symptom only showed toward the end of the summer, when I noticed an at first fleeting tendency for her to dump her food outside the bowl and not eat it, this from a dog that would normally wolf her food down so rapidly that I’d bought her a slow-down bowl. Shortly after, she started to refuse walks. Again, I put this down to the heat.

Kidney failure is cruel to a dog, especially a small one.  The dog’s normal diet must be replaced with a low protein one. Dogs crave protein (or rather their associated amino-acids), and the best commercial preparations available are unpalatable to most dogs.  Feeding becomes challenging when a hungry dog turns away from the food you’re putting in front of her.  She lost a lot of weight.

She wants to be at home more and more.  I notice that when we set off for home from the pub on the hill, she walks ahead, and the nearer we get, the more she picks up the pace.  She actually looks like a younger dog in these moments.

We’ve had some good days, but over the weekend, she’s lost interest in food again. She’s started to stumble and walk into walls.  This morning, she wouldn’t settle, and started walking around the room, behind the sofas, something she’s never done before.

I walk her to the vet to weigh her, a habit I’ve got into since she was diagnosed five weeks earlier.  Each Monday, the veterinary nurse notes the weight on her record .  Five weeks ago, she weighed 8.7kg.  Today she weighs 7.3kg. She’s still up for walking, but, ever off the lead, I let her take her time over the lanes and fields. I pick her up and carry her when she’s had enough. It’s a beautiful October Indian summer’s day. I take a few pictures of her, to add to the hundreds I have.

I drive her to the vet, for her vaccination booster, knowing full well that the vet will decline to give it.  I want the vet to see her, because she has really started to struggle.  She’s fallen down the stairs, needs picking up for larger steps and has taken to hugging close to walls to maintain her balance and walking into things.  As we go in, she becomes confused, and starts circling around instead of walking straight into the vets as she usually does.  I put her on the lead and we go in.  The vet, as expected, declines to vaccinate.  After examining her, the vet offers her a treat, and she immediately goes into seizure on the examination table.  It’s not a deep seizure, but both dog and owner are distressed. Thank heavens I decided to drive.  Before getting her back into the car, I let her walk in a nearby field, as she still needs to circle while trying to follow me.

That evening, I take her to the pub in the village, where she is a well known and much loved regular, and tell the landlady that this will be the last time.

I’m up early, to carry her outside to wee (she’s had a few accidents lately).  I decide to give her a small amount of her normal food, rather than the god-awful detested KD diet she’s had to endure for the last five weeks.  She wolfs it down, obviously hungry for it.  She goes back to her day-bed in the living room, and I sit with her.  Almost immediately she goes into seizure. I hug her and calm her, through my tears.  I call my friend Barbara, who lives opposite us, and tell her that it’s time.  I call the vet.  I walk her, off the lead as usual, into the field at the end of our street while Barbara gets her car out of the garage.  As Barbara drives us, I hold my dog in my lap, and take her harness and collar off for the last time.

I am really going to miss her.  Saying this particular goodbye is the hardest thing I’ve had to do for a long, long time.

Wildfowling: The end of an era

Having made my debut on this marvellous site with an article about my passion, I thought I would follow that article up with a slightly more personal account of a memorable day in my life [more…]

It’s late June 2021; I have a brief face-to-face encounter with former Supreme Court Justice Lord Jonathan Sumption, at the Chalke Farm History Festival, near Salisbury, Wiltshire.  He is there to promote his latest work, [more…]