Start with the value 0 and 1 and then apply the following rule. Take the last 2 numbers you have and then add them, to make a new number and repeat.

Doing that, we get the following sequence:-

…which will go on forever. We could express this as “The next value” F(n+1) will equal “The current value” F(n) added to “The Previous value” F(n-1).

We repeat this process (mathematically: we iterate) to get each new value 1,2,3,5,8 etc.

Remember this iteration idea, because we’ll use it in future posts,
which you won’t read, or is that the comments?

Why did the ancients find this interesting?

Well one thing that is immediately curious is if you divide one of the numbers, by its previous number you’ll find that the value you get starts honing in on a fixed value as you go higher in the sequence and that value doesn’t change.

This number has been known about for millennia. It was christened the Golden Ratio by Luca Pacioli way back in 1509. The Greek letter Φ (Phi) is often used to represent it and even Leonardo Da Vinci liked what it brought to his paintings when he used it to proportion one connected thing to another.

The Golden Ratio is an irrational number like π, meaning that it can’t be represented by a neat fraction. The digits on this number never end. 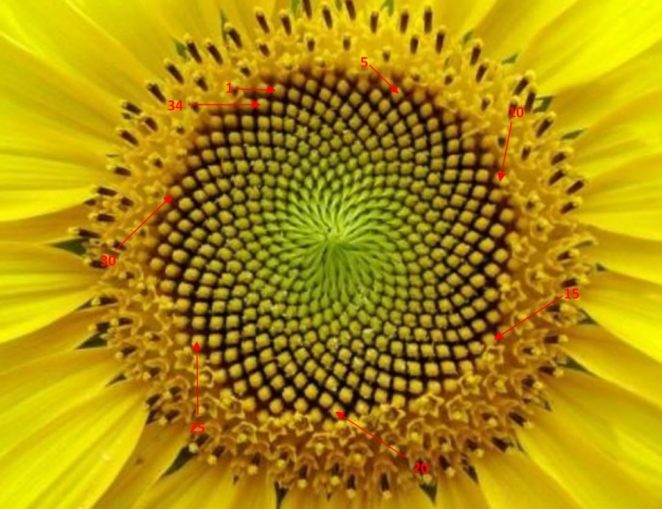 All individuals are different, but if you average across a large number of people the following will be found.

This ratio has been spotted all over the natural world – including our heart and in our cells prompting the question is this somehow biologically special?

Fun fact… if you cut a tube in the surfing world, it means you’ve managed to balance on your board inside the crest of a rolling wave. If you’re good enough, you will have the joy of riding through the tube formed by the water, as the wave rolls.

It goes without saying that a wave is a dynamic system consisting of mostly saline water, gravity and kinetic energy. A wave has zero “understanding” of a sequence of numbers and yet if you plot the curve of the wave, you’ll find a Fibonacci spiral. 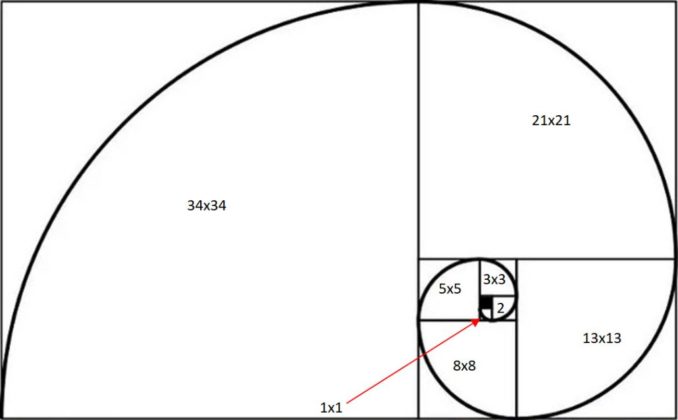 A combination of our gravity, the density and motion of the water manage to result in this shape for the curvature of the wave.

As it happens this same spiral is stamped throughout the whole of nature.

Snail shells, self construct through the building formula of DNA and form a spiral shape adhering to the Fibonacci sequence. This doesn’t occur because Snails or DNA understand Fibonacci sequencing: it occurs because over time, this specific construction provides the best chance of survival. So snails are smarter than you realise, not because they are brainy, but because over millennia they, as a group of living organisms, have searched through all possible permutations and found one offering a high chance of survival, when their house is built a certain way.

Fibonacci could be said to be built into the fabric of nature. Snails have simply managed to grasp that deep natural truth.

Chaos Theory, or more correctly complexity theory, is a discipline exploring the link between the natural world and the abstract world of mathematics and believe me, what is interesting is just how many links there are.

Apparently, some subset of younger people are upset and intimidated about the use of full stops in text and other messages. I am not sure what they would think about the ellipsis, … , or [more…]

The Padovan Sequence and the Plastic Ratio

The golden ratio is well known and is associated with the Fibonacci sequence of numbers.     (phi) is the positive root of the quadratic equation . The exact value is given by Its continued [more…]

At the end of September, Doc Mike Finnley posted an interesting article about early pocket calculators that caught my eye (I avoided reading any comments). I enjoyed his construction notes, given many of these older [more…]