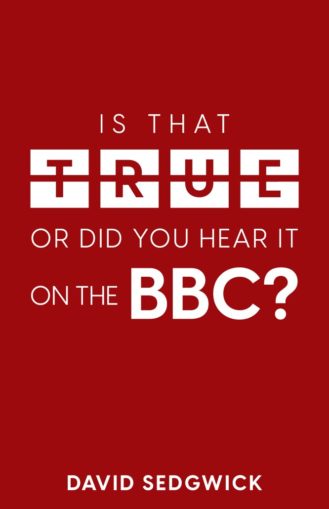 In his latest book, author David Sedgwick quotes the BBC’s own words back it giving the broadcaster nowhere to hide.

Cast your minds back a couple of years to the start of the so-called covid-19 panic. Just months into the outbreak a government advisory body called The Scientific Pandemic Influenza Group on Behaviours (SPI-B) made a statement which should have instantly alerted the population to what was about to happen.

Given that the death rate from the ‘deadly pandemic’ was so low, the group concluded that: ‘A substantial number of people still do not feel sufficiently personally threatened (by it).’ In order to remedy this situation – to ensure people did feel threatened – the group advised the threat level needed to be increased by using ‘hard-hitting emotional messaging.’

And so, along with its mainstream media allies the editorially ‘independent’ BBC duly began to pump out story after story of sky-rocketing cases, hospitalisations and deaths both with and from covid. It didn’t matter how or why; the government demanded fear and the state broadcaster delivered. What the BBC singularly failed to do was question the motivations behind this edict: why manufacture a state of fear when one did not exist?

Although I’ve been writing about BBC machinations for several years now, even I was shocked at the level of deception employed by the broadcaster at government behest. Declaring the Pfizer vaccine “100%” safe for children in a now infamous BBC Newsround broadcast was just the tip of a hugely dangerous iceberg. By this stage the broadcaster was doing everything it could to urge people – children – to take the experimental vaccine. But what made this latest effort so egregious was the fact that cases of myocarditis – especially in teenage boys – were being regularly reported by the scientific community.

Immune to reality, the BBC ploughed on. The “100% safe” claim was merely edited out of the video. Other claims including one which stated the vaccine offered 95% protection against covid were left standing. Under pressure the broadcaster finally sneaked out a brief acknowledgment on the Corrections page of its website. Devi Sridhar, the ‘expert’ who had made the false claim, meanwhile escaped rebuke. In fact, Sridhar was rewarded with a series on BBC Radio Four promoting a book she had written about the ‘pandemic…’

The BBC’s handling of covid-19 and the ‘pandemic’ is one of a number of stories covered in my newly-released book mischievously titled: Is That True Or Did You Hear It On The BBC? The theme of this, the third in a series of BBC critiques, is the broadcaster’s cosy relationship to wealth and power – especially its pivotal role within what I term US-(UK) hegemonic power and for whom it carries much water. It is precisely this PR role that accounts for the ceaseless pro-vaccine propaganda seen and heard across the BBC platform these past two years: for the ‘British’ Broadcasting Corporation works not for the (ordinary) British people, but on behalf of powerful (mainly US) corporate political interests such as Bill Gates, Pfizer, Wall Street and various offshoots of US hard power aka the military industrial complex.

Disinformation is necessary to promote the interests of these powerful actors. And this, of course, is why the BBC is such a valuable asset of global power: without incessant and hysterical propaganda, the covid hoax would have almost certainly fallen flat on its dishonest face; without the BBC climate alarmism too would have no doubt faltered.

Thus, the BBC attempts to invert reality, to convince its audience that the world is not how it appears, rather it is how the rich and powerful proscribe: a world facing a ‘climate emergency’ and covid ‘pandemic’ potential disasters which only the (BBC-approved) ‘experts’ such as Devi Sridhar or Neal Ferguson can solve. Just do as you are told: stop going out; stop driving; stop flying; stop eating meat; stop breathing. But DO panic.

Having already written two previous books exposing what has become a truly pernicious organisation, my latest effort will no doubt be ignored by the entire mainstream – especially the ‘quality’ (and even red-top) newspapers and politicians of every stripe. No matter, I write these books to chronicle the staggering dishonesty and arrogance displayed by the BBC. My aim is to create a permanent record, one that cannot be wiped away by Google or any other BBC-friendly organisation.

Enjoy the trip, but please ensure appropriate medication is at hand…

Is That True Or Did You Hear It On The BBC? Is available on Amazon in paperback and eBook format.
It is also available directly from the author via eBay.
It can also be ordered from bookshops: ISBN 978-1999359171

The devil is always in the detail

Cast your mind back to the morning of Friday the 2nd of May 1997. The British electorate had overwhelmingly swept Anthony Charles Lynton Blair to power, in a landslide victory that conjures imagery of a [more…]

A Message from Marianna

Hi, I’m Marianna Spring! I’m 24! I’m the BBC’s specialist misinformation reporter. You may recognise my wide-eyed, 24-year-old face from The One Show, BBC News Online, BBC Radio 4, pictures I post of myself having [more…]

Be careful what you wish for

There is a certain segment of society that is sufficiently deficient in self-awareness, social conscience, understanding, and indeed wisdom, that they are incapable of any ethical or moral position other than that which is floated [more…]