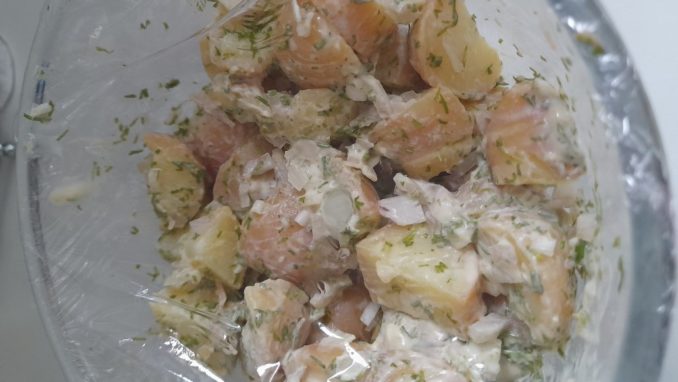 In general I am not in favour of things Teutonic though some of their ladies are rather tasty plus the average German man is little short of a pig so if you can be semi civilised you are in with a good chance especially if you have mastered the language, or at least enough to communicate.

There is always an exception and in this case it is Potato Salad north German style. That means it is made with mayo rather than fried onions and white wine vinegar, that variation is preferred in the southern end of the fatherland.

Making it could not be easier with the exception of peeling the bloody things after they have been boiled.

I use Ruby Gem potatoes, available in Waitrose and probably many other emporiums. They are so delicious I could eat them as they are having removed the skin but let us progress.

A pack contains about 600 grammes of spuds. These you boil for 20 minutes in their skins, strain, leave to cool and then remove the skins. This is the worst part and takes time and some patience.

You then dice the peeled spuds, one of the larger potatoes in that mix might result in six pieces, the smaller ones just get cut in half.

Chop half a largish shallot into very small pieces and also chop up some dill. Start off with a smaller amount of dill and increase if desired. Dill is not a strong herb so you can overload with no worries.

Get a tablespoon of mayo, you can even make your own if you are brave, and add a teaspoon of dijon mustard. The braver among you might like to try Colman’s english mustard but I think that would be too strong. Mix them well together and add the shallot and dill. Mix that well and put the chopped potatoes on top and gently stir round to avoid breaking the spuds. For those of you unsure how to make mayo, it is just egg yolk whisked while vegetable oil is drizzled in though Hellman’s or the like will be OK.

If you can wait a day, leave it in the fridge to fester, the flavours will mingle but don’t eat it until it has warmed up a bit. Otherwise just eat it anyway. A perfect accompaniment to a BBQ though the erics claim it goes with fish dishes. As far as I am concerned, I can just eat it on its own.

If the boss considers my picture worthy of publishing it has to be admitted that it doesn’t look as good as it tastes. The skin has been removed from the spuds but they still have a bit of a tinge about them. I also like a lot of shallot to go with them but others may prefer not quite as much. Some of you may have already seen this dish and often it looks much whiter when they don’t add the mustard. I suggest some experimentation if you like the idea of a potato salad.

In furtherance of the English mustard debate. In the early 90s I was working in Holland and lunch generally consisted of a slice of bread with slice of meat, cheese or frikadelle and the like. I brought some Colman’s with me one week and used it at lunchtime. My Dutch colleague was most interested and even more impressed when he tasted it. He could not get enough of the stuff. I am still, after nearly 30 years, unsure if he really liked it or took to it because it was free (those with experience of living in the Netherlands will understand). I think there was no such mustard on sale in the low countries; another case of missed opportunity for British Industry. One day I may regale you with a similar tale of brown sauce and in Belgium to boot !

August 1941 was extraordinarily quiet in the theatres we are concentrating on. This month it is only news from Libya and precious little of it there is. But things were happening in Italy. In Tobruk [more…]

We are fortunate at chez Rookwood to offer our guests a wide variety of cuisine, everything from Scottish and English to Italian, French, German, Chinese and Indian. The latter is a bit of a misnomer [more…]

Following Dirk’s explanation of his injuries, escape from Germany and new position as a recruiter for the SIS, Jinnie wanted to know why he was telling her and how he knew she was starting a [more…]