This article was prompted by Distant Cumbrian when he posted a query on behalf of his sister.

A short history of my smoking life.

She started searching my clothes for the incriminating evidence. Once found she’d hand them to my youngest brother, who would pocket one then hand them back to me. Unbeknown to Mum I had 2 packets of fags, the one she’d find and the one I smoked from.

I started working for my ‘old fella’ at 17……he just said to me ‘I think you’re a fool, but I can’t, nor won’t, stop you and I won’t tell your Mum, but I still think you’re a fool.’ He used to smoke Henry Winterman’s Half Coronas.

My first fag of the day would be after morning brew and a bacon butty, about half 10. I could go a working day and only smoke 5, but if I went to the pub at night, I’d smoke the other 15.

I tried giving up, for a fortnight, but realized it was a no go. I switched from No.6 Kingsize to John Player’s Blue because they were milder and didn’t hurt my throat as much. I was smoking about 100 a week, not heavy, but the cost was around £35/40 a week.

I worked for a chemical waste company and smoking on site was, quite rightly, verboten. On nights we’d nip out the back gate for a fag, I think the company knew but turned a blind eye because we were off site. One year, during my medical, the Dr. asked if I was still smoking.

If Mrs.C. and I were going to France, I’d buy 1000 fags at 75% the price in the UK. We did Booze and Fags Cruises to Adinkerke, Belgium where they were even cheaper. Eventually, with 2 kids, an unwell wife, one wage and mortgage etc. something had to change. From then on it was all about price.

I’d always known that tobacco might not kill me but the impurities would,…………so, what to do?

About 8 years ago I looked into vaping. I did lots of research, looked on all sorts of sites, trying to find out as much as possible wondering whether it would be ok for me. The thing that did it for me?

On one forum site a guy had gone to his Doctor complaining of cluster headaches, he’d been relatively well up till then. The Dr. asked what he’d changed in his life……..he’d started vaping… the Dr. said ‘Continue, it’s healthier for you and drink more water, the headaches will go.’

I decided that when I started, I would avoid tobacco flavours. To my mind it would defeat the object, I’m giving up tobacco, ‘cos it’s too dear, not the nicotine, to which I’m addicted. I got the headaches for about a week; I drank lots of water and it’s not been a problem since.

I started on apple and menthol flavours, though that reminded me of the Consulates Mum used to smoke. I’ve been using cherry recently, but I’ve just bought a new flavour………Black Jacks….

There are vapers out there with knowledge and experience better than mine, even my eldest brother brews his own vape liquid.  He generally brews liquid that doesn’t give off too much vapour, making it discreet.

Vapers who blow loads of vapour out are, to my mind, the vegans of vaping………’Oooooo look at me, I vape.’

I’m always considerate, I don’t vape in other people’s houses unless they do, or they smoke. I always ask permission in pubs and restaurants and I’m never upset if they say no.

It has always been about cost.

Distant Cumbrian asked, on behalf of his sister, about the Caliburn by Uwell, it retails at about £20, I’ve not tried it so can’t comment. These last few months Home Bargains seem to have cottoned on to vaping. They sell a starter set for about £10. I suggested to DC that his sister give that a go. 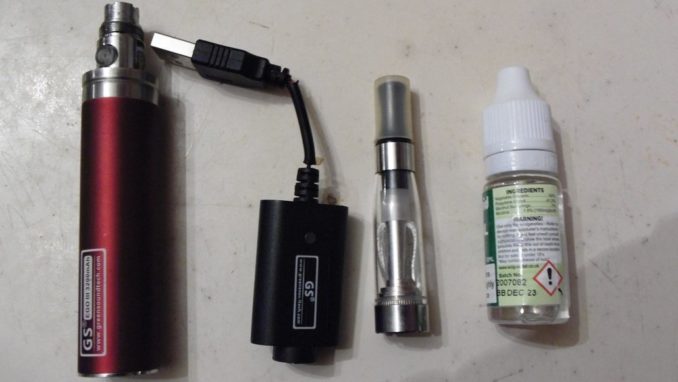 A USB charger is about £5, again, you should get at least 6 months. Be aware though, some don’t like being plugged into the mains, use your PC, it’s safer.

Atomizers/Cartomizers I used to buy from Fleabay. These would last at least 2 weeks; I’ve had the odd one last 8 weeks. I reckon 3 weeks is average. Recently Home Bargains started selling them for 99p. I started using one on Christmas Eve, I’ve just changed it today 4th March………a record I think. Let’s see how long No.2 lasts.

The liquids, again, are from Home Bargains at 99p a pop, one lasts about 3 to 4 days. Sometimes I’ll lose the taste of the liquid then I’ll switch flavour for a day or two, then switch back.

As an aside the bottles are ideal for model makers, the top can be removed, washed, re-filled with PVA and you have a fine point glue dropper.

The worry for me now is the Government realizing the loss of Tax Revenue, as millions like me switch, they’ll start taxing it at Budget time.

There are many REAL benefits. Mrs.C. says I don’t look grey anymore, in fact healthier. (My wallet would be healthier if Mrs.C. didn’t have access to it.) I don’t have that residual tobacco aroma floating round me. I can smell tobacco from 20yds away, though sometimes I’ll admit I miss that. I pick it up, vape and put it down, where as a fag, I’d smoke to the finish. When I coughed up phlegm it would be a greenish/blackish colour, these past couple of years that has stopped all together.

I’ve given up tobacco, not smoking.

I vape, you’ll call me ghey but I’m not grey.

The Best Thing I Ever Bought

Ask yourself, ‘What is the best thing I ever bought?’ Probably a house, car, meal, holiday or maybe an item of clothing. Or maybe that power tool you can’t do without, it’s adaptable and sorts [more…]

Are the markets over-reacting? Are the Media and Financial Industry intentionally manipulating (or misinterpreting) coronavirus data in a case of using grossly inaccurate statistics filled with hyperbole to cause a desired outcome? Coronavirus (aka Covid-19) [more…]

It has puzzled me for considerable time now some of the truly childish “Warnings” that one finds on the side of food packets and generally throughout society these days. Nuts with the statement “Contains nuts”. [more…]