I write this article as Keir Starmer says he can’t support BLM due to their Marxist/Socialist  ideas about defunding the police and Matt Le Tissier, a famous footballer and Sky TV soccer pundit questions whether he wants to wear a BLM badge because he also recognises their Marxist, anti-society manifesto. the BBC said it is to ban their presenters and pundits from wearing a BLM badge. And on SKY we see some pundits have stopped wearing the badge of submission.

People are waking up to what many of us knew weeks ago that BLM is a Marxist, anti-society, anti-capitalism, anti-Semitic organisation. The absurdity of a police officer taking the knee to an organisation that wants to defund it.

I went to my first soccer match about 55 years ago and was a regular supporter at Spurs in the 1960’s. I don’t go any more. The traffic, seated supporters standing and five hours by the time I travel, park and walk to the ground, and then try and get home in Tottenham traffic is too much.  I just watch their matches on TV (thanks MSNBC when the main broadcasters don’t carry it!).

In the 1960’s I was queuing outside the ground at 12:30, listening to Round The Horn, Jules & Sandy. Racing up to the West stand I had a wooden box inside my duffle bag and had my spot on a metal barrier protected by a column supporting the upper tier. As a shorty I needed that box.

Nostalgia is when I walked to White Hart Lane station at the end of a match, packed like a sardine and the carriages fall silent as Sports Report comes on at 5pm and then the collective cheer and groan as the results come in. Those were the days.

I was listening to a Mark Levin monologue about how sportsmen, Hollywood luvvies and (so-called) news anchors all support BLM but that’s because they live in walled housing miles away from any Black area and don’t have to mix with the Marxists. They earn millions of dollars. They are Capitalists supporting Marxist/Socialism.

What is happening with football sickens me. Here is a very convoluted, virtue-signalling and confused statement from the Premier League (edited for brevity):-

The Premier League says its Black Lives Matter campaign is sending a message it is unacceptable to treat black people differently to anyone else – not an endorsement of a political movement.

A series of tweets from the Black Lives Matter UK account about Palestine has prompted criticism.

The Premier League said in a statement it was “aware of the risk posed by groups that seek to hijack popular causes to promote their own political views”.

“These actions are entirely unwelcome and are rejected,” it added.

The Premier League has shown its solidarity, with players’ names replaced on the back of their shirts with ‘Black Lives Matter’ for the first 12 matches of the restarted season, and a Black Lives Matter badge will feature on all shirts for the rest of the campaign.

But while ‘Black Lives Matter’ has become the slogan behind the protests, Black Lives Matter also exists as a global organisation, founded in 2013, with several goals including to advocate against white supremacy and police violence towards black people.

In its statement, the Premier League said it stood alongside players, club and a wide range of football organisations who had “come together in recent weeks to reject racism and to show support for the message that black lives matter”.

The league said “Black Lives Matter” had become an “expression of unity for people from all communities who believe it is unacceptable to treat black people differently to anyone else”.

Hence, the Premier League believes that “white supremacy” and “police violence towards black people” are real and actual phenomena. An organisation involved in managing a sport has decided it is a political advocacy organisation and forces its members to accept their decision, presumably under penalty.

The first time I saw a televised match where both sides and officials took a knee I let out a torrent of swearing that even surprised me. A visceral, sub-conscious reaction triggered by football allowing itself to align with an anti-society, Marxist, antisemitic political organisation.

I watch on a laptop and it has its own mask when I watch soccer:- 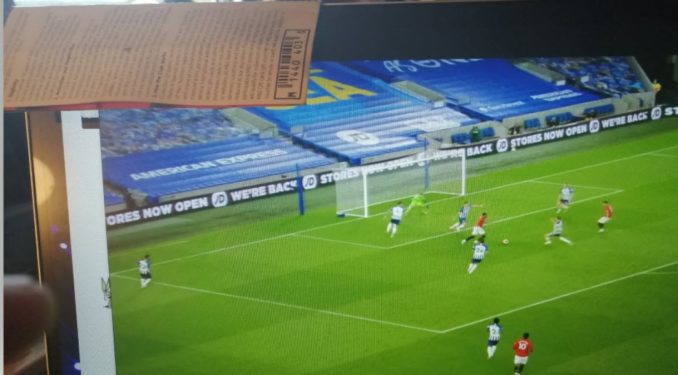 I start watching a minute after kick-off so I don’t have to watch Spurs players at a Jewish supported club, with a Jewish Chairman and Jewish backer bow down to a Marxist, anti-Semitic movement. The “mask” covers the score and time where they also flash “B**** L**** M****” from time to time.

WTF has any of this got to do with football when they had their own “Kick It Out programme months ago?

There is an irony that a “WHITE LIVES MATTER” banner was flown over a match involving Burnley. Burnley might be the only team in the Premier League who don’t have a Black player in the first team they put out on the pitch. Their captain Ben Knee (sorry, Mee) said how disgusted he was. Maybe you should look at your own club first team.

Football has made a major mis-step. They have taken advantage of the fact that there are no fans in the stadium. I absolutely guarantee that if they took a knee at White Hart Lane with 70,000 in the ground they broadcasters will have to turn the sound off because of the boos. The same across the country.

There are concerns over the organisations ideology and political ambitions

The Premier League said it recognised ‘the importance of the message that black lives matter’ – without referring to the organisation’s name in upper case – but made clear that it ‘does not endorse any political organisation or movement, nor support any group that calls for violence or condones illegal activity.’ But chiefs are not expected to ditch the BLM badge on shirts, having drawn a distinction between BLM’s cause and the group itself.

The cause has been widely supported across football and the wider sporting world by TV and media stars, but that all changed on Sunday when BLM UK issued a barrage of tweets over Israel’s proposed annexation of the West Bank and claimed that ‘mainstream British politics is gagged of the right to critique Zionism.’

The following day Labour leader Sir Keir Starmer, who has ‘taken the knee’ alongside parliamentary colleagues, called it a ‘shame’ that the sentiment behind the BLM protests was getting ‘tangled up with these organisational issues’ and said calls to defund the police were ‘nonsense.’

BLM UK responded by tweeting that ‘as a public prosecutor, Sir Keir Starmer was a cop in an expensive suit.’ But it also prompted a row between Lawrence Fox and Gary Lineker after the actor asked the BBC Match of the Day presenter if he agreed with BLM’s messages on Palestine – forcing Lineker to distance himself from the group. Comedy writer Lee Kern, co-writer of Who Is America?, has also hit out at BLM for its ‘anti-Semitic conspiracies’.

Sky Sports’ ditching of the BLM badges during yesterday’s coverage at the Amex Stadium comes after another pundit, Matt Le Tissier, said he only wore the badge after being asked to do so by bosses at the broadcaster.

Upon seeing Sky’s top pundits had stopped wearing BLM badges on air, fans were quick to share their thoughts on Twitter, with one saying: ‘If only they’d done a little research like us peasants did before jumping in with both feet.’

The Premier League are hoist by their own petards. They can’t ditch BLM without seeming to ditch “black lives matter”

A Message from Marianna

Hi, I’m Marianna Spring! I’m 24! I’m the BBC’s specialist misinformation reporter. You may recognise my wide-eyed, 24-year-old face from The One Show, BBC News Online, BBC Radio 4, pictures I post of myself having [more…]

The emergency sub-committee were all back in the main room: the ceasefire at Broadcasting House was over two hours old now and disparate reports were starting to be assimilated, an incomplete but increasingly coherent picture [more…]

A Hitchhikers Guide To Communication & Persuasion