When I started work for the local council in 1964, I shared an office with a secretary, the high point of whose life seemed to be the arrival of the monthly NALGO newspaper which contained a prize cryptic crossword that kept her entertained throughout her lunch breaks. I had often looked at them in complete bafflement so one day I asked Pat if she’d show me how to do them. What I soon came to realise was that there are a number of conventions that crossword compilers use and certain ways of ‘looking at’ clues of which I was completely ignorant. Once these secrets had been revealed I was able to understand what was required and then was able to solve more and more of what had previously been completely meaningless clues. Since then I have occasionally won cash prizes in ‘The Times’ and other cryptic crosswords but over the years I have doubtless spent far more in postage than I ever won. That’s the beauty of the GP puzzle, it costs nothing to enter. So why not have a go? You could win a lovely Puffin mug.

How to approach the crossword

Basically, what you are trying to do is to get inside the compiler’s mind and you must always remember that Richard Puller, in common with his entire ilk, is a devious bugger so this can take some time.

Anagrams: Most of the clues that Richard sets tend to be anagrams so the skill in solving them lies in deciding what the final word(s) that you are looking for means, finding the letters from which the answer can be derived and then unscrambling them. Here are a couple of examples taken from previous puzzles:

Practical hint: if you write out the letters of your anagram randomly in a circular pattern and draw a series of dashes underneath to indicate the number of letters, you can write in any letters you have obtained from previous answers, cross them off your grouping and then play about with what is left. Often you will have seen the answer before it has all been written out.

Hidden words: compilers often hide one word reading either forwards or backwards in another word or string of words. Have a look at:

Initial letters of a number of words to make another word: what it says, sometimes compilers refer to ‘odd’ where the answer is derived from letters 1,3,5,7 etc. in a word or sentence or ‘even’ where the sequence is 2,4,6,8 etc.

Topical clues: Richard usually includes one or two clues that refer to something that happened either in the news recently or on Going Postal and sometimes you have to be a regular non-reader of the comments or articles to know what is going on.

When we tragically lost our young friend Æthelberht, the following clues appeared in tribute to his memory,

To give you an idea of what is involved in completing a GP Saturday crossword, here are the steps I used to complete a recent puzzle.

Step 1. Print out a copy of the puzzle from the .pdf file link at the bottom of the article. At this stage I usually emphasise the breaks between words in the same clue on the grid. Occasionally when away in the caravan with no access to a printer, I’ve drawn out the grid and copied out all the clues but as you may be aware, I really do need to get a life.

Step 2. Run through the clues in order pencilling in any that leap out as being obvious

1A – Republican leader is ‘R’, visit BEACHES with it to give BREACHES or non-compliance (Yes, it really is that simple.)

10A – hidden word in cONCEption (doing it one time)

20A – anagram of ON TRAM gives MATRON (a nurse)

26A- anagram of MOAT gives ATOM (a particle)

4D – anagram of SAW HER gives HAWSER (a rope)

16D – another anagram of the first letter of Corbyn and ‘confused’ moments gives COMMENTS (that no-one reads.) I already had the C and an M from CHIN and MATRON

So, after the preliminary run-through, the grid looks this: 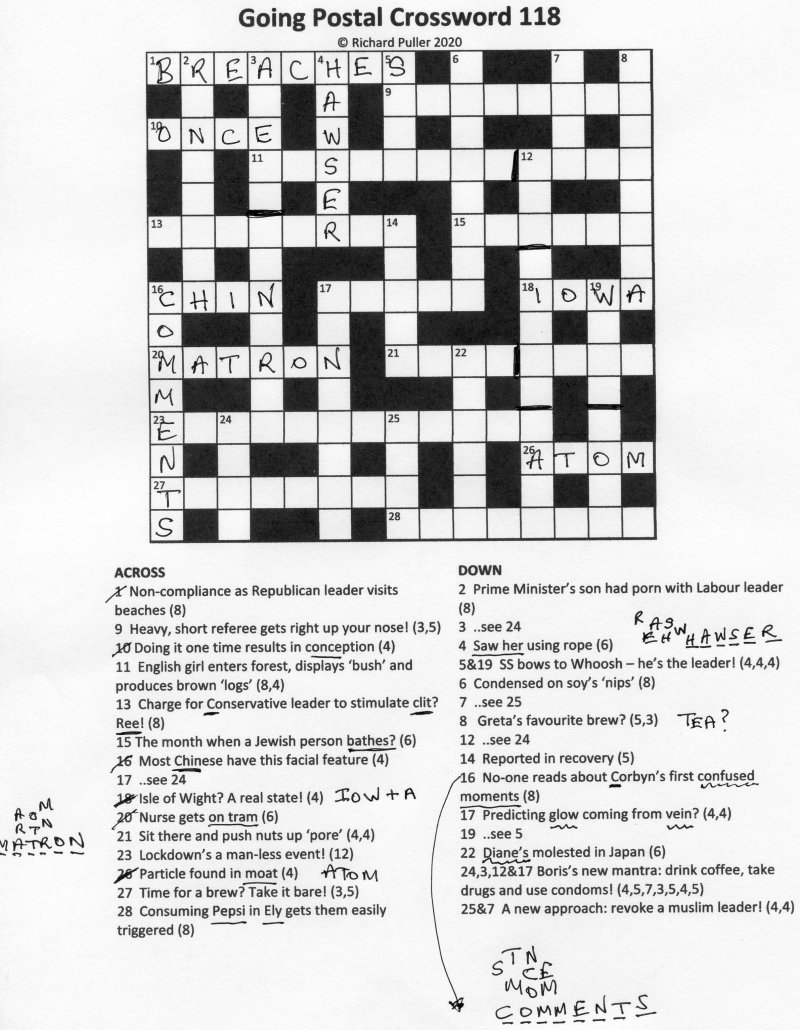 Step 3. Revisit the clues that now have letters filled in and see if any more become obvious

13A – anagram of C from Conservative and CLIT REE to give an 8 letter word meaning ‘charge’. It has to be ELECTRIC

27A – time for a brew? This must involve beer, ale or tea. Anagram of TAKE and BARE and as the first word has three letters it is more than likely TEA leaving KBARE making TEA BREAK

3D – looks promising but it is part of that long sequence that starts at 24D. What is Boris’s new mantra? Well, it certainly includes ‘stay alert’ so we can put that in the grid, 24D – STAY ; 3D – ALERT plus C _ N _ R _ _ , CONTROL? Yes, I remember. The slogan was ‘Stay alert, control the virus, save lives’ and it fits so those can also go in.

12D – is therefore THE VIRUS SAVE

17D – anagram of GLOW and VEIN meaning predicting. It can only be LONG VIEW (a prediction)

8D – Greta’s favourite brew? Well, the three letter word is likely to be TEA and she’s a green nutter so GREEN TEA is the logical answer

6D – anagram meaning Condensed on soy’s ‘nips’ (8) confused me as I initially thought of condensation of gases to liquids but ‘condensed’ also means abridging or shortening a book or document. Rearranging the letters SOYS NIPS gives the answer SYNOPSIS (a brief summary)

15A – This looks like an anagram of ‘BATHES’ to give the name of a month in the Jewish calendar. I can only see two possibilities Shebat or Shabet and a quick check online showed SHEBAT, a term I’d never heard before to be correct

With all the above answers entered, the grid now looks like this. We’re getting there! Now for the difficult bit. 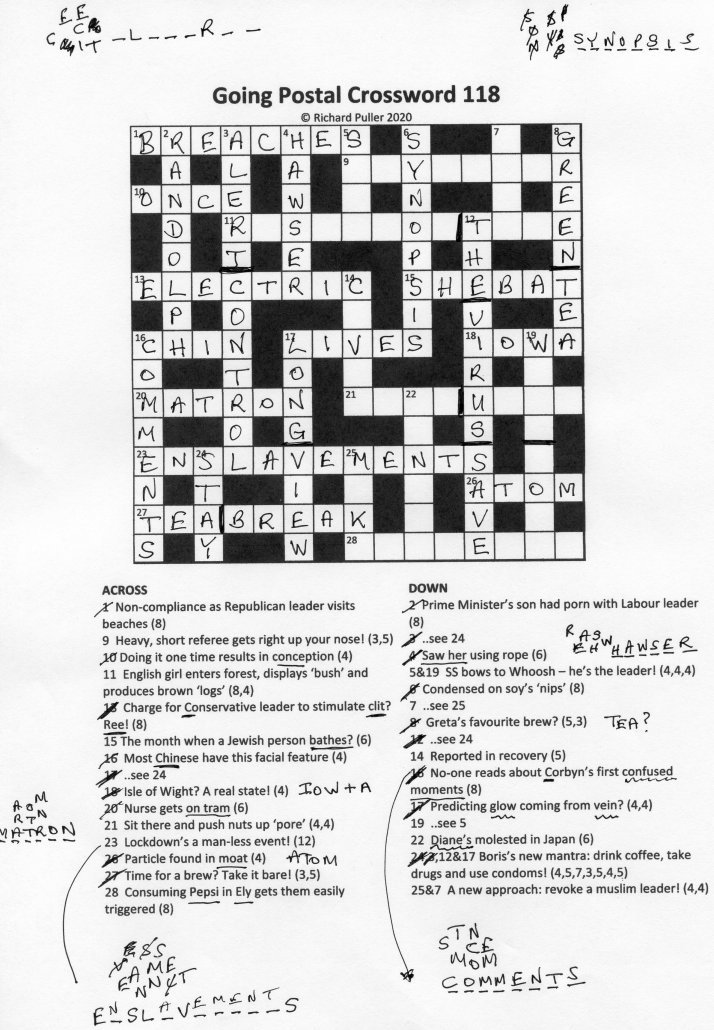 Step 4. Time to concentrate on the remaining, less obvious clues.

9A – a short referee is a ‘REF’ which together with ‘HEAVY’ gives another anagram of something that gets up your nose. With that Y in place, it can only be HAY FEVER

11A – is a bit tricky, an ‘English girl’ is often referred to as an English ‘Rose’, a forest is a wood and a bush is a tree. Put them together to get ROSEWOOD TREE (a source of deep brown coloured logs)

5D – now to the Whooshy clue which I expected to be about lorries but wasn’t. 5D can only be SHOW so 19D must be an anagram of SS BOWS WHOOSH minus SHOW. This gives SSBOWSHO which in the context of ‘leader’ must be (SHOW) WHO’S BOSS

28A – an anagram of PEPSI and ELY which gives EPILEPSY

14D – is another hidden word reCOVERy

21A – is a two word anagram of NUTS and PORE meaning ‘sit there’. This can only be REST UPON

And this leads us to our final clue and one of Mr Puller’s favourite and recurring topics, the lovely Diane.

22A – another anagram of the letters in ‘DIANE’S’ being ‘molested’ to give something in Japan. This one gave me a bit of trouble but the only result that made any sense was SENDAI which according to Duck Duck Go is the largest city north of Tokyo. Result! You learn something every day. 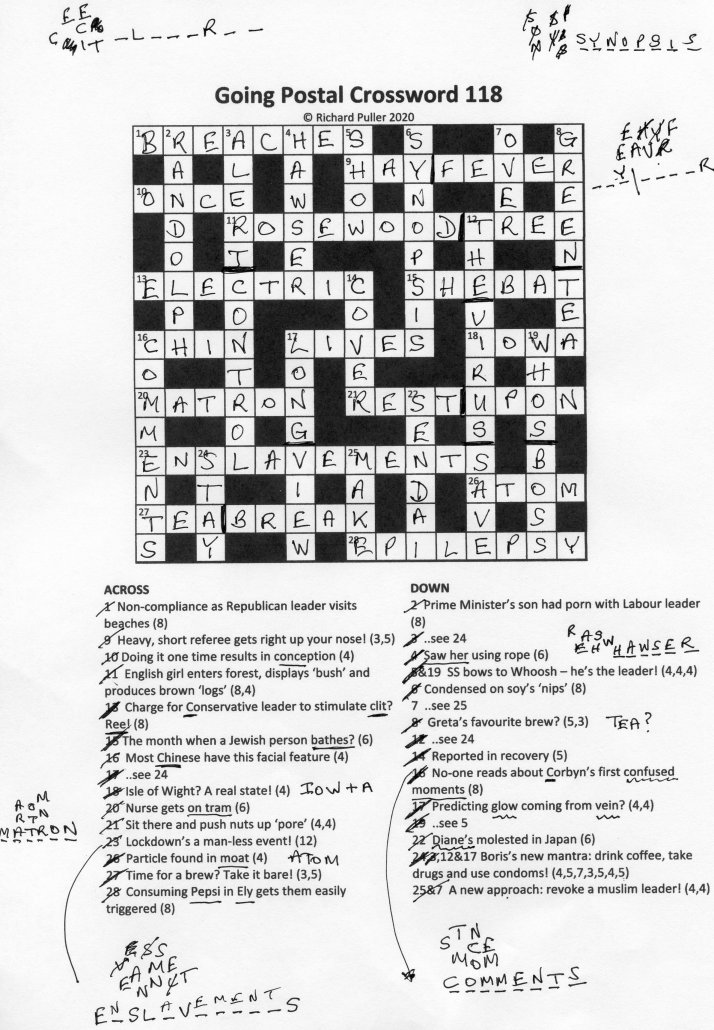 And there you have it, one completed GP crossword that took me a hell of a lot longer to write up than it did to do.

Stage 5. Put your answers in an email and send it to Swiss Bob before the deadline. I simply copied and pasted the previous entry into a new email every week and then modified it with the new clue numbers and answers. It is very easy to cock-up at this stage so do check that everything is correct before hitting the send button.

You can now sit back smugly and eagerly await Swiss Bob’s email telling you that you have won and asking you to choose which mug you’d like to receive. When it arrives don’t forget to toast good old Jen the Blue who never did receive the mug he so clearly deserved.

Sincere thanks to Richard Puller for continuing to produce these challenging and irreverent crosswords that have often had me laughing out loud as I completed them.

To my surprise, I’ve just won another one that is currently in the post. It’s beginning to seem a bit greedy.

First correct entry out of ‘the hat’ wins a GP mug. Email entries to me by 6.00 pm Sunday, subject ‘Crossword’. Contact here on email Last week’s winner of a GP mug. 150 – Captain [more…]

First correct entry out of ‘the hat’ wins a book to the value of £20. Email entries to me by 6.00 pm Friday, subject ‘Crossword’. Contact here on email Winner of Crossword 196 and a [more…]

First correct entry out of ‘the hat’ wins a GP mug. Email entries to me by 6.00 pm Sunday, subject ‘Crossword’. Contact here on email Last week’s winner. 124 jgm2 ( I really will get [more…]