Work on the layout has slowed a little with the recent weather disruptions affecting routines. The successful completion of the cyclists/ Sweeney run was also the closing of a chapter.

As you can see Wiggins is bringing up the rear.

The decision to take was – what next? With most of the electronics in place, it is time to tackle the scenery.

Having done some research online, there are many ways to do this, with some astounding examples of what can be done out there. The options do require skill and introduce risk of making a complete dog’s breakfast of what is in place, hence my reluctance to make a start.

To show you what can be done, take a look at some of the photographs of this site -the editor is mad about the scenic and photographic aspects, often not even wiring up the layouts. 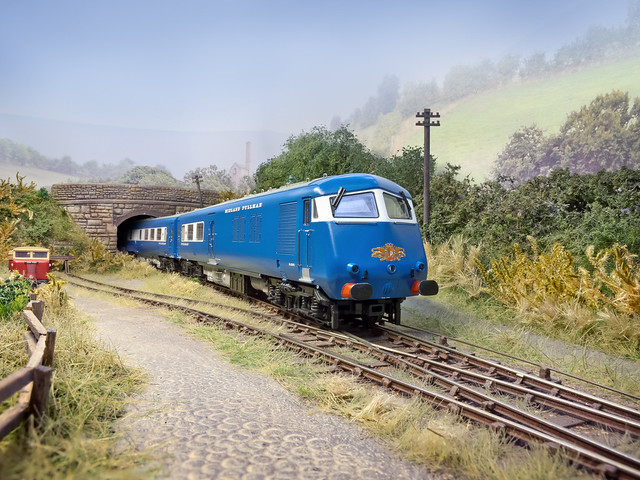 An album of that layout is found here

Getting the track to that level is incredible, the grass applied using static electricity to make it stand up while it dries.

In the end I had the idea to make up a prototype, it gives the chance to try things out without irreparable damage and mull over some ideas.

I had been expecting to just get a lot of scenic ballast, pour it all over the place and fix with PVA, either using a diluted mixture in a sprayer or dropper. It is a messy way to work and I wasn’t too keen on constantly having the dust everywhere.

Ok so prototype – a few things to try out, firstly one that I had spotted, but was mentioned on here as probably not worth bothering with is spacing the sleepers out. Apparently the manufactured track does not actually match what it should in reality – the sleepers are too close together for strength and to ease moulding. As this is all about learning, I decided to space them on the prototype – which involves cutting the plastic moulding to make each sleeper independent, and moving them until the gap between each one is 6mm (measured by whittling down a wooden peg to the required width).

The plastic is tougher than it looks – the only way to cut it in the end was using a stanley knife and rocking back and forth until it cut through – with potentially hundreds of sleepers to cut, and track already glued down it could be quite a task.

One website proposed an alternative to just loose glued ballast – use modelling clay to fill the gaps and give the levels needed, then paint over and add ballast as necessary. This also gives the option to have tracks that are embedded in cobbled areas – simply by covering the sleepers completely with clay, then dotting with a retracted ballpoint pen to give the circular pattern of cobbles. The path in the photo above is an excellent example. I think using this option on the majority of the track on the left of the layout will be best for giving more usable space – most yards would have that sort of track – and mean I don’t have to cut the sleepers or take up the track! To continue to try things out, I will take the track up on the front single siding to the right and cut sleepers accordingly. It’s all learning.

The modelling clay is a bright terracotta, the sleepers black rather than brown, so everything needs painting.  Once the clay is squashed into place and dry it looks rather garish. Dabbing with the retracted ballpoint pen gives circle affect.

Getting the colours to be in the right place is a challenge and probably not something I’ll do too well. I might have to invest in a static grass setup – something that uses static electricity to make the strands of grass to stand up while it sets. As the paint I had was rather limited colours – a couple acrylic paints in black and brown, this test is of the two options – cobbles in black and ballast (too thinly covered so far) on the right.

With that, I’ll make a start on the main layout when time allows – the eldest is back from Uni in a fortnight and I’ll temporarily lose the refuge so it could be a while!

Having a Bike Fitting

Ever heard of a bike fitting? No not a cycle having a epileptic fit, this is the process of having a bike adjusted to fit you. I know there are a significant number of you [more…]

Things have moved on a bit this episode, with some visible progress for once! I must thank you all for your kind words in the unread comments, which do spur me on to do a [more…]

Thank you for your kind comments upon part 1. In this one we get to a point where I can sit down in comfort. Day 6 Keep on digging We left it with half a [more…]