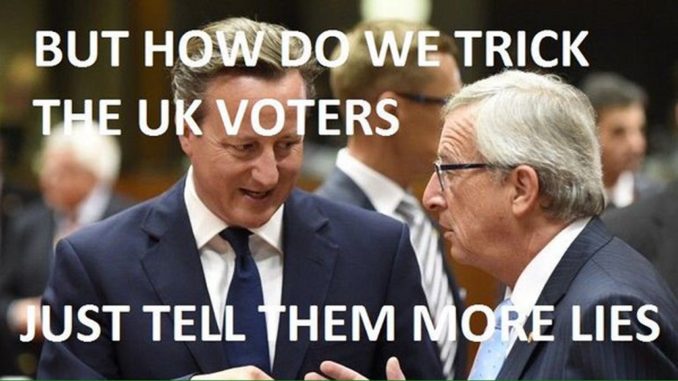 Whilst lurking in the shadows of GF and now GP, I have upgraded my English vocabulary. Cameron is no longer CMD, he is the LTC. Diane Abbott is no longer a mere MP, she is the FFRC. All extant politicians with the notable exception of Nigel Farage and one or two others are CUNTS, and we live in a Kleptocuntocracy.

I recently white-flighted to a small village in the West Country whose location shall remain secret lest its goats be importuned, and have been doing my best to turn some of my new friends to the Brexit side.

The overriding impression I get is that a lot of the remainians / undecideds are either uninformed or believe the SCBBC/MSM/LTC propaganda. I was speaking to someone yesterday who volunteered that she thought it was a good thing that Khan had been elected as Mayor of London because he was a ‘moderate’. When I pointed out that he was involved in the Farrakhan appeal and had dubious associations, she was genuinely surprised. She also had not considered that whilst she could vote against the LTC at the next election, she could not do the same for Drunker as no-one had elected him in the first place. Nor was she impressed by the fact that the EU accounts had not been signed off for 20-odd years.

I have never been to a political meeting in my life except one in the student union ~ 40 years ago when I was dangerously pissed/mushroomed up (it didn’t end well), but I’m going to a Vote Leave do tomorrow night (stone cold sober this time) and have volunteered to distribute leaflets around my village. As far as I am concerned this is the most important vote any of us will ever cast. I hate to see the way European and English culture, which I love, is being bulldozed by the EU Axis Powers. Twice in the last 100 years we have had to save Europe from itself, and we now have to do it once again.

Both my parents did their bit during WW2, neither were in any way racialist, they just knew right from wrong, called a spade a spade and were cynically conned by the Unspeakable Shit Heath into voting for the ‘Common Market’.

When I was little, we had a black cat called ‘Niggy’ and used to drive across Europe for our holidays and loved the differences between countries, but it was always nice to come home. All those wonderful differences are being systematically eradicated by the EU/CP/Bilderberg triad and its fellow travellers, PC and -ism. It seems that everything I was brought up to believe in has been turned on its head and I’m supposed to somehow feel guilty for being English. Well I’m fucking not. Fuck them.

I can think of plenty of things I would rather do on a Tuesday evening than go to a dingy meeting hall, but I have come to the conclusion that I would not be able to look myself in the face on the 24th of June if I didn’t do my bit and just sat back as is my wont and waited for Armageddon.

This has been a Brexit junkie’s summer. And like the heat hope has been rising. 1st of June was the big Action Day + Rally in Peterborough to help Mike Greene get elected as an [more…]

Bells have been rung since time immemorial, but full circle bell ringing only began a few hundred years ago in this country. Bells on the continent are rung in various ways either mechanical or manual. [more…]

An Open Letter To Nigel Farage

From Martin Mezger, Writer at Going-Postal 12. December 2018 Dear Mr Farage On Sunday, I attended, along with many others what was effectively a UKIP rally in support of our democratic decision to leave the [more…]