Last time, our well-travelled Mystery Album photographers took us to South Walsham on a Norfolk Broads wherry holiday. We were left tied up at the present day mooring of Lord Fairford. Since then, the ladies have packed away the tarpaulins and the gentleman have planned a route for this week’s adventure. 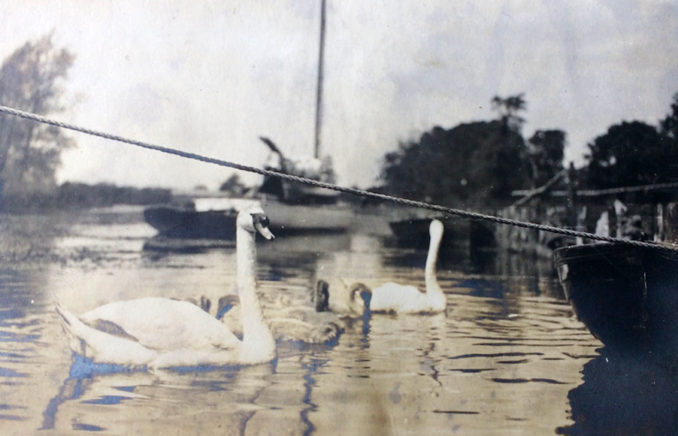 Those Broads holidays were popular between the wars. I’m indebted to Mr Rob Bruce who describes such a vacation transcribed from his grandparent’s log kept while aboard the Merriment in August 1919 only nine months after the end of the First World war. Well before the days of electrical entertainment, radio had barely been invented (television was a box of valves in a laboratory in Scotland or Berlin depending on who you believe), visitors were well used to making their own amusement.

The holidaymakers brought a gramophone with them and whiled away their candle-lit evenings with gramophone concerts, sing-songs, card games and reading aloud from the popular books of the day. Like the fictional characters in Arthur Ransome’s Swallows & Amazons stories, the members of the party allocated themselves various naval ranks. The text in the log refers to each of them by their rank rather than their names.

For this evening and this evening alone, Puffins in the unread below the line comments are given permission to (nay, obliged to) allocate themselves and each other naval ranks. I shall be a Commander, like James Bond. Sort the rest of the ranks out amongst yourselves. Try to be more ambitious than the crew of the Merriment who were respectively; skipper, mate, coxswain, boatswain, deckhand and boy.

A friend tells me that, appropriately, First Sea Lord in the relevant local dialect (Germano-Romanche) of landlocked Switzerland abbreviates to ‘Bob’. If you think that sounds far fetched, wait until you hear about the Dutch Tutch. Read on.

The Merriment’s crew were split into two competing watches. Days began with a swim followed by a hearty breakfast. Merriment was scrubbed down and repairs made on account of the previous day’s adventure. There was a circuit for such things and the Merriment visited St Benet’s Abbey and the River Bure as described in last week’s Mystery Album. In between times, the crew took it in turns to keep a light-hearted log detailing their competitive boat rowing and swimming tournaments. There were trips ashore for provisions. New friendships were made at the moorings. They visited Potter Heigham and so did our Mystery Album crew.

In doing so, we go back on ourselves according to the order of photos in the album and head east past St Benet’s Abbey to the River Thurne and then sail upstream in a northerly direction. En route to Potter Higham, we encounter the aforementioned Dutch Tutch. 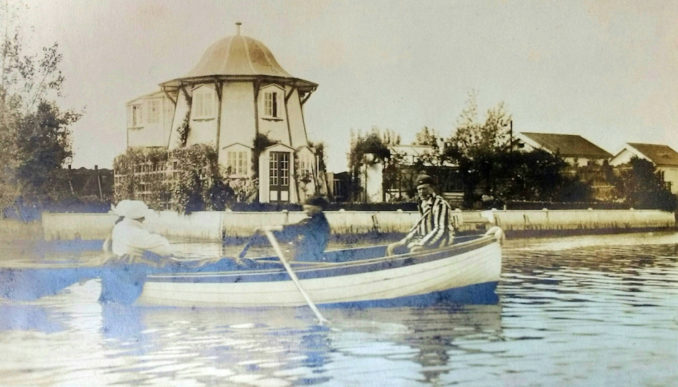 If you think Dutch Tutch is a converted watermill or mill pump you’d be as wrong as this author was before being rescued yet again by Mr Johnathan Neville of the excellent and highly recommend Norfolk Mills website. Puffins are allowed to guess at what the Dutch Tutch originally was.

Wrong, wrong, wrong, no, very cold. Wrong, getting colder, wrong. One more guess. Wrong again, unless you had a stab at the Dutch Tutch being the bottom half of Great Yarmouth’s Britannia Pier helter-skelter. No, I wasn’t expecting that either.

Great Yarmouth’s seven hundred foot long wooden pier opened in 1858 and was enjoyed as a promenade by Victorian day-trippers and holidaymakers. Open-air concerts were held upon it. As the Norfolk seaside resort’s popularity increased, a second pier was built in 1902. This time a wood and steel construction that included a Grand Pavilion seating audiences of 2500. Near the pier stood a penny a ride ‘On the mat’ helter-skelter. Presumably named because of the mat you sat on as you slid down the twisting slide. In 1909 fire destroyed the pier.

The BBC’s Norfolk Legacies speculated that the Tutch will have been kept in storage in Great Yarmouth before being transported along the Thurne sometime before 1928. Keep in mind we think our Norfolk Broads mystery photographs were taken sometime before 1925. Most probably the helter-skelter was carried by barge, with its final location being decided by it being too big to pass under Potter Heigham bridge.

Back in Great Yarmouth, the cycle of re-buildings and burning downs continued with the current pier opening in 1958.

As for the name, there are two schools of thought. The black and white twelve-sided structure might reflect a Dutch architectural influence, or its location may recall a similarity to the flat countryside of Holland.

In its new home, the bottom part was utilised as a holiday cottage. The top part was placed alongside and used as an outside toilet. 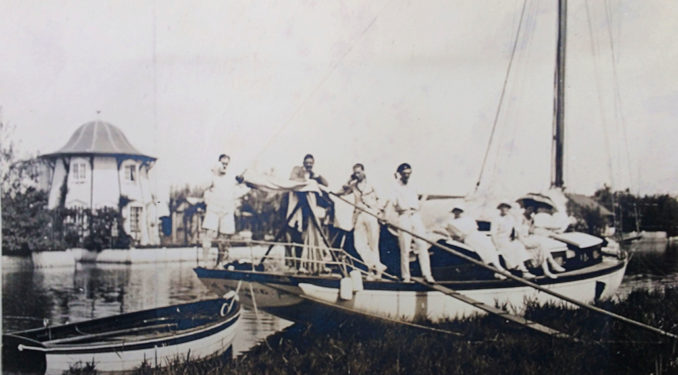 At one point it was the first and only building on that length of the river. It has survived and can be found on aerial photographs. Not only that, it’s still a holiday let, yours for £275 a week. Sleeping four, the upstairs is reached, perhaps not surprisingly, by a spiral staircase.

However, it does now have company on both sides of the river all the way up to Potter Higham five hundred yards further north. There, we reach Potter Higham Bridge. In the modern-day, a bridge pilot is required to pass under the bridge and is available from the nearby Phoenix Fleet boatyard.

Were the wherries able to lower their masts? They must have been. The Broads Authority lists 30 bridges. Given the flat nature of the land, clearances aren’t great – many less than 7 foot. After lowering the mast, navigation through the bridges would see use of a quant pole. A useful piece of kit deployed to provide tractive effort in tight corners below or beside the vessel.

Last time, I promised evidence of an immortal celebrity up there with Greta Thunberg and Vladimir Putin. And here he is. Tellingly standing to the right, we can see a teenaged Nigel Farage pictured sometime before 1925. As further proof, the gentleman to his left is the spitting image of his father.

The Farage’s will have been crew, hired with the vessel for the duration of the trip. Below we can see Mr Farage senior making use of the quant pole. Interestingly, Mr Bruce’s relatives on the Merriment didn’t need a crew. There was good reason for that. Named in their surviving ship’s log, we shall return to them in another episode.

Eagle-eyed Puffins will have noticed that the stern of our own wherry shows her to be the Palace. Built in 1914, she was a 43′ yacht built by Ernest Collins of Wroxham. Fitted with a Stones patent yacht WC and self-emptying washbasin, between the wars Palace and her sisters were the height of luxurious Broads yachting. Palace was the last of three America class boats to be built, the other two being America and Lapwing. She was also the most luxurious, even including a piano in the salon. She was available for August hire at the rate of £10 a week – the equivalent of a working man’s monthly wage.

Palace remained for hire until the Second World War but didn’t appear in Blake’s catalogue, the Bible for such things, after WW II. Her fate is unknown, presumably long since broken up. It was thought her sister, America, was sold to a private owner in 1947 after being laid up during the war. Local rumour had it she had been sailed across the Atlantic. Fanciful though it seemed at the time, photographic evidence of just that emerged in 1995 when a holidaymaker’s 1959 photograph showed America in Martinique.

The reason for the mid-nineties interest in the vessels was because the America class was being rebuilt from scratch by the Norfolk Broads Yachting Company. The new Palace was shown at the London International Boat Show at Earls Court in 1995. A quarter of a century later, Palace is still available for hire via Martham Boats. Luxuriously fitted out within a glass fibre hull and beneath mahogany brightwork and softwood spars, Marthams describe the wherry as the envy of the entire Broads hire fleet.

And, they could have added, seemingly as immortal as Nigel Farage! 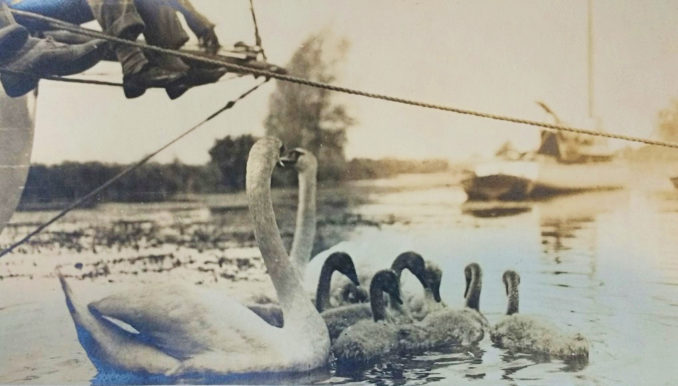 © Text and photographs Always Worth Saying 2021

Previously on these pages, Puffins have learned that everything was better in the old days. Malta was better as a Crown colony, railway stations were better with splt-flap Solari rattle boards rather than giant RGB [more…]

Didn’t He Do Well?

O, wad some Power the giftie gie us  To see oursels as others see us! Thus wrote grumpy bad speller of a Scottish poet, doonhamer Rabbie Burns. To be blunt, dear Puffins, I wish that [more…]