6 months on from my last article, I thought I would write another but this time include information on artists and art I aspire to own, rather than just focus on recent purchases, giving me a bit more scope.

During the summer we visited the market town of Tetbury, nestled in the Cotswolds.  A rather pretty town with a selection of independent shops and restaurants.  We spotted an art gallery selling exclusively Aboriginal art and decided to pop in to see what was on offer.  The gallery is owned and run by a lady who grew up in Australia and moved to the UK a few years ago.  The idea behind the gallery is to support artists from communities in the Northern Territory of Australia and is the only dedicated Aboriginal gallery in the UK.  As well as selling original artwork they have an ‘Interiors collection’, consisting of tiles, wallpapers, rugs, fabrics and ceramics, produced by British manufacturers, based on Aboriginal designs.  I’ve never really taken an interest in Aboriginal art previously but I have to say that many of the designs and patterns make a powerful statement and it’s something I can appreciate.

Walking around the gallery we spotted two paintings which stood out.  The first of these was created by Shanna Napanangka Williams titled “Seven Sisters Dreaming” which tells the tale of the seven ancestral Napaljarri sisters who are found in the night sky today in the cluster of seven stars in the constellation Taurus, more commonly known as the Pleiades. The Pleiades are seven women of the Napaljarri skin group and are often depicted in paintings carrying the Jampijinpa man ‘wardilyka’ (the bush turkey) who is in love with the Napaljarri-warnu and who represents the Orion’s Belt cluster of stars. Jukurra-jukurra, the morning star, is a Jakamarra man who is also in love with the seven Napaljarri sisters and is often shown chasing them across the night sky. In a final attempt to escape from the Jakamarra the Napaljarri-warnu turned themselves into fire and ascended to the heavens to become stars.  Whilst this story is interesting it was the combination of colours and the composition of the painting which drew my attention.  I think it is absolutely stunning, makes a big impact and it’s one of my favourite pieces of art. 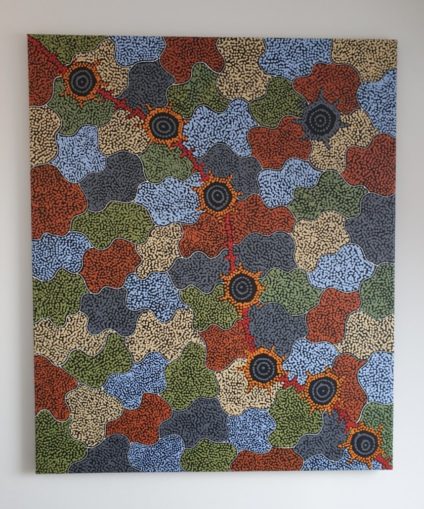 The second piece, which also had an impact on us, was created by Marissa Napanangka Anderson and is called “Water Dreaming”.  It tells the story of Puyurru, west of Yuendumu, where in the usually dry creek beds are ‘mulju’, naturally occurring wells.  The men of the land, rainmakers, sang for the rain, unleashing a giant storm, which travelled across the country from the east to the west from Warntungurru to Warlura, a waterhole 8 miles east of Yuendumu.  At Warlura a gecko called Yumariyumari blew the storm on to Lapurrukurra and Wilpiri.  Bolts of lightening shot out at Wirnpa.  The Water Dreaming built hills at Ngamangama using baby clouds and also stuck long pointy clouds into the ground at Jukajuka, where they can still be seen today as rock formations.  Again, the combination of colours and the design stood out and it’s another piece we absolutely adore. 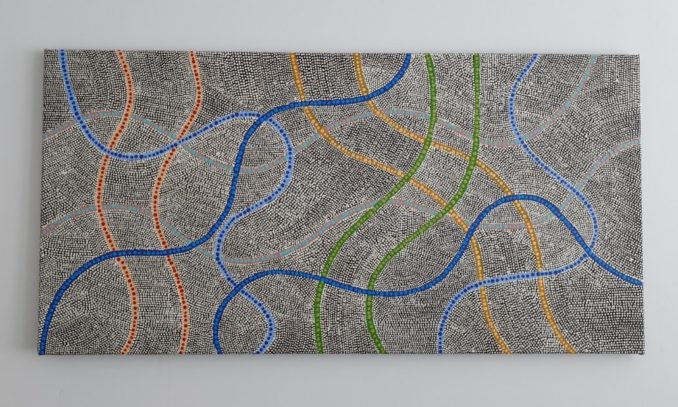 A few weeks after our trip to Tetbury we attended an arts and crafts fair in Cheltenham.  The fair attracted various artists across the UK, covering jewellery, leather, wood, textiles, ceramics, glass and metal, amongst other forms.  There was plenty there to see but nothing much that really appealed to us apart from one stall selling handblown glass items.  Graeme Hawes creates stunning pieces by hand, the like of which we had never seen before. He explained to us how the items are created and cut and polished to produce items which provide an almost unlimited number of variations depending on where you stand in relation to them.  He’s a really engaging person and we could have chatted to him for hours.

The pictures below show a few of the items on his stall that day but a better idea can be obtained by visiting his website – https://grhawesglass.co.uk/shop/

One piece in particular stood out.  The design is called ‘murrini’ and is based on a method of creating a type of glass first produced in the Middle East more than 4,000 years ago and revised by Venetian glassmakers on the island of Murano in the 16th century (more information on this from Wikipedia – https://en.wikipedia.org/wiki/Murrine)   The piece Graham had created weighs about 3kg and is approx. 25cm to 30cm in diameter.  At £2,000 it’s not exactly a cheap item but the time and effort to create such a beautiful and individual piece is, in my opinion, worth it.  Just have to get saving up…. 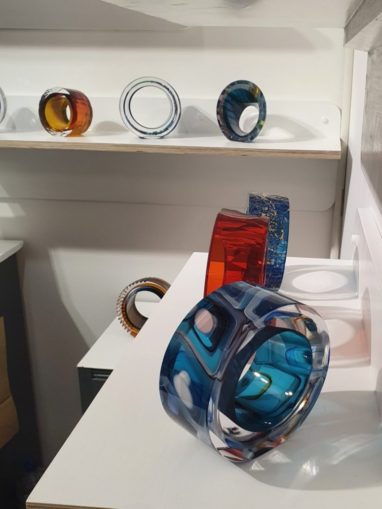 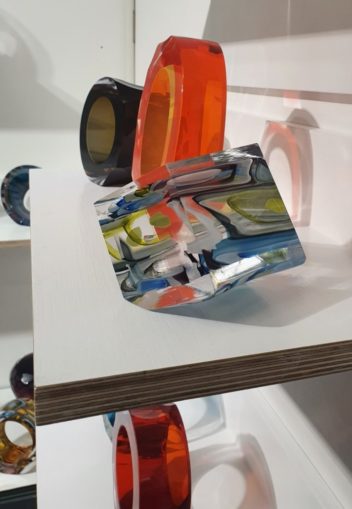 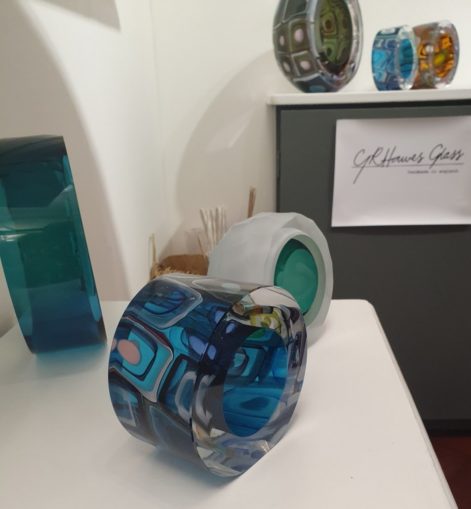 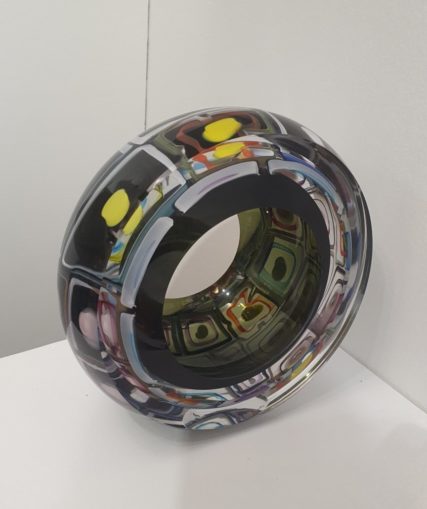 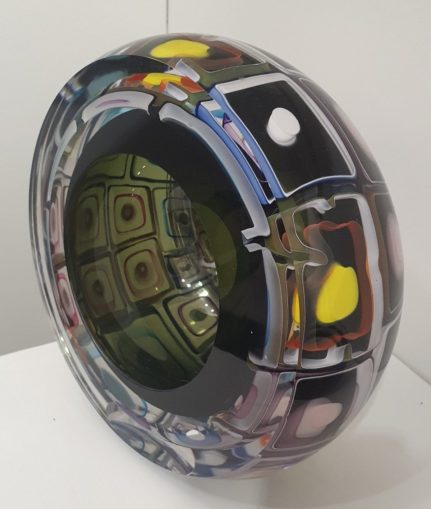 The final piece in this article is a lino print we picked up on a trip to Scotland in early September (hopefully by the time this article is up my “A trip to Scotland” mini series will have been published and you will have read about our time in Scotland). Dundas Street in Edinburgh is the place to go to if you like art and we met the artist, Joshua Mikes in the Birch Tree Gallery.  Joshua creates the most wonderful lino prints with an almost photographic quality to them.  He was there for a couple of weeks and the gallery were promoting many of his works.  We started chatting to him and he explained how he creates the lino prints, starting with the lightest colours first and gradually moving towards the darker colours, cutting away at the lino to build up the 4 layers required to produce the final piece.  He prints a maximum of 12 of each work he creates. 2 he keeps as “master copies” and the other 10 are for sale.  Mrs Reggie and I both liked one print in particular – a seagull chick standing on cobblestones.  The way in which the chick almost disappears, being perfectly camouflaged against the cobbles is quite incredible.  Joshua has a website where you can view more of his work – https://joshuamiles.art/   I’ve looked at many lino prints over the years and Joshua’s work stands out amongst the best in my opinion. 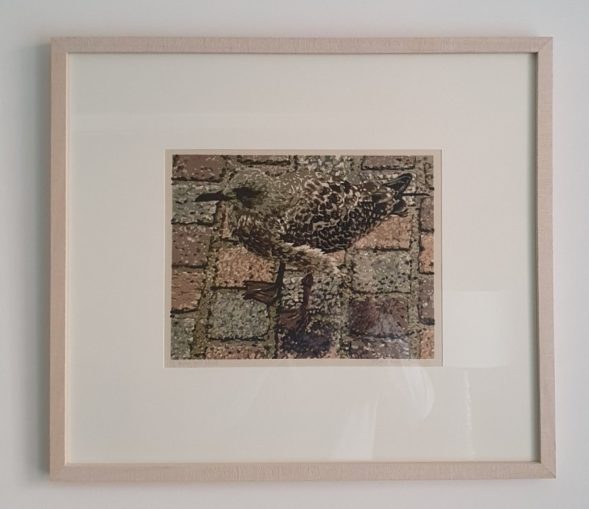 Hope you liked this latest instalment.  Thank you for looking.

Britannia has a long and established presence on our nation’s coins; first appearing on coins from the Roman era.  In AD119 Emperor Hadrian introduced a number of coins that depicted a female figure who personified [more…]

Two Rascals I looked down on a thunderstorm. The distant lights of late evening Manhattan were being complimented. Clouds beneath me luminesced with staccato lightning flashes above a rain-lashed Long Island. 1988 had ended badly. [more…]

On a mini-break to London some years ago, we decided to have a look round the Courtauld Gallery (in the old Somerset House, which used for decades to be the central registry of birth, marriages [more…]