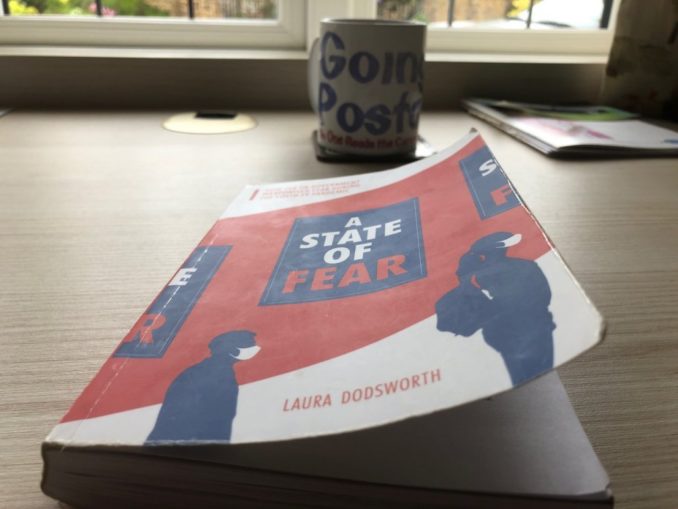 It’s late June 2021; I have a brief face-to-face encounter with former Supreme Court Justice Lord Jonathan Sumption, at the Chalke Farm History Festival, near Salisbury, Wiltshire.  He is there to promote his latest work, “Law in a Time of Crisis”.  Following his presentation, I tell him that we are reading Laura Dodsworth’s book and that we are finding it troubling.  Sumption tells me that having been sent an advance copy he too finds it to be a challenging read.

This book is, indeed, challenging … not because of any literary deficiency, far from it; rather because the message conveyed is unrelentingly bleak, with little good news to counter the bad.  Recent events suggest that our society is undergoing profoundly harmful, and possibly irreversible change.

The review resumes with an in-depth look at what the author describes as “controlled spontaneity and propaganda”, in a chapter of the same name.  “Clap for Carers” is given further scrutiny.  Like us, the author felt very uncomfortable with this ritual.  Suprisingly, she did partake, but only on one occasion.

For the avoidance of doubt, #WeDidNotClap.  On the very first occasion, the first Thursday after Fright Night (March 23), we were in our back garden when it started; I had no idea what the ruckus was about; Mrs M had to remind me.  Interestingly, around the same time, I had a rather heated discussion on the subject with a good friend living in NYC.  Apparently, the mania for such “spontaneity” had spread to the land of the free; we decided to drop out from further discussion.

“Clap for Carers” was started by a UK resident Dutch national named Annamarie Plas. Within hours of its rather inept debut appearance on social media, it was supported by high-profile personalities including the Cambridges and the Beckhams.  Dodsworth interviewed Plas and found her seemingly to be of good intention.  However, when questioned further, it turned out that Plas at the time had “a close friend” in No. 10.  Plas claimed that no UK government help had been forthcoming, that it was all “spontaneous”, but it does seem somewhat convenient, to say the least, that a supposedly grass-roots campaign should suddenly attract such a wide following, not within a few days, but within minutes.

We found the clapping thing to be incredibly distasteful; we were embarrassed both by and for those people we knew who were so easily manipulated.  Dodsworth describes the “spontaneous” clapping as Stalinist, orchestrated, and perhaps it is no co-incidence that around the same time, I posted this: 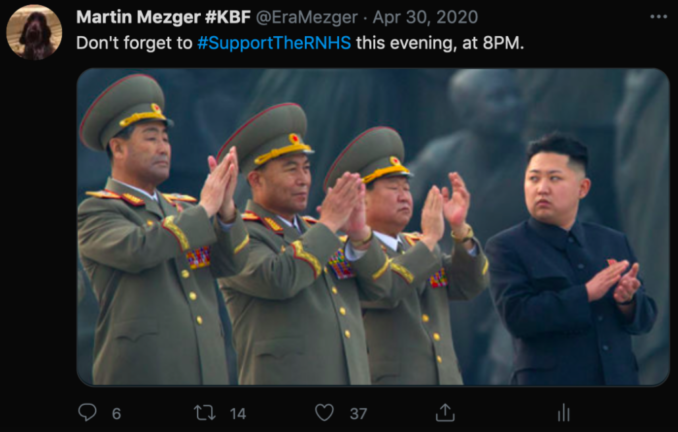 The narrative moves on: “A few months in we saw that mistakes had been made. A paper came out that said lockdowns cause more harm than good [in the summer]” this from a psychologist, Dr Bunker-Smith.

Crucially, Dr Bunker-Smith goes on to say the following,

“Freedom becomes conditional; you wait to be told you are allowed it, and it can be removed from you. The British public are in a coercive control relationship with the government. Most people will say they are not; in fact, they will defend the “relationship”.  People in an abusive relationship can get very angry when they are called out, if they are not ready to hear what’s going on.”

We have seen this over and over again.

I have been criticised for interjecting part 1 of this review with my own family’s perspective, yet I make no apology for doing so. This is, after all, my, our, lived experience. My critic friend perhaps would like to be a technocrat, one who wishes to reduce all problems to a technical solution, devoid of emotion. In the real world, this cannot be. The real world’s problems will not be solved by the enforced wearing of N95 masks, nor an untested vaccine.

Dodsworth spends some time on metrics; metrics are loved by government, and she does a good job deconstructing some of the more egregious. It is well established that we have been consistently lied to about the following:

And the reason?  Over-reliance on the failed Imperial College/Ferguson models.  It is astonishing to me that we continue to place such reliance on such discredited models.  It is also, utterly dismaying that some of our friends here and overseas fail to realise the culpability of our governments in accepting these models, apparently unchallenged to support their lockdown policies.

The author discusses the infamous Whitty & Vallance “shock and awe” presentation of September 21st 2000, during which they predicted 50,000 new cases by mid-October and 4000 daily deaths at the same period, when it was clear that this was based on out-of-date information.

Dodsworth shares our suspicion that these and other data were deliberately corrupted and misrepresented to support a narrative, a narrative of fear, that the threat posed by the virus should be seen by the public as being far more severe than the real facts merited. The figure of 50,000 was likely chosen deliberately to get the public on-side.

Now, when someone died, they died of Covid.  It didn’t matter if they actually did or not, provided they propped up the narrative. Even the UK Government eventually had to admit that this led to an overestimation of figures by nearly 25%. Unsurprisingly, the higher figure rather than the lower one, prevails. The official retraction got about five minutes air-time, and the earlier, false figures are “the truth”.

Other semantic trickery is discussed … amongst these are the government’s practice of referring to those testing positive (quite possibly falsely) for the virus as “cases” and “patients” where in many if not the majority of instances the individuals were asymptomatic, did not require hospitalisation or medication, and therefore were neither “cases” nor “patients” in any accepted sense of the words.

The author spends some time in discussion of the disappointingly few public figures who resisted and dug their heels in; Carl Heneghan, Sunetra Gupta and others in the UK come to mind.  It is particularly disturbing how quickly and thoroughly these voices were silenced.  Dodsworth also pays tribute to ordinary people who refused to go along with the narrative, and how such people were demonised from the start as “covidiots” and covid-deniers.

The one thing I would question the author on is over-reliance on polls, particularly those conducted by YouGov.  We are told endlessly that the UK population lusts for continuance of lockdown, at a 70%+ rate, and this is not our lived experience.

In her closing paragraphs, Laura Dodsworth gives some advice to her readers, which strikes a particular resonance in the Mezger household. The advice is to minimise one’s exposure to the seemingly endless stream of government propaganda coming from mainstream and social media.  In other words, turn the television off, and limit online social media intake.  Go to trusted sources, such as Going Postal, Lockdown Sceptics, Conservative Woman and some columnists at the Daily Telegraph. (Sherelle Jacobs, Allison Pearson, and others). I often reflect that we as a family have fared much better than some of our friends and neighbours because we never watch TV, and haven’t for years.

In summary, Laura Dodsworth has written a much needed, thoroughly researched piece not about COVID but about our government’s response to COVID.

Walk on the Wild Side

You know what they say, ‘if you can’t stand the heat, get out of…’ So, on a sticky, sultry summer’s day we decided to do just that and headed out of the bustle of the [more…]

Behind The Mask, Part One

Rachel  DeSouza  strode  purposefully from the  velvet  curtain  edged  wings  of the conference centre, out to the lectern that was positioned under the spotlights, at the centre of the wide stage. Her  high heeled,  though [more…]