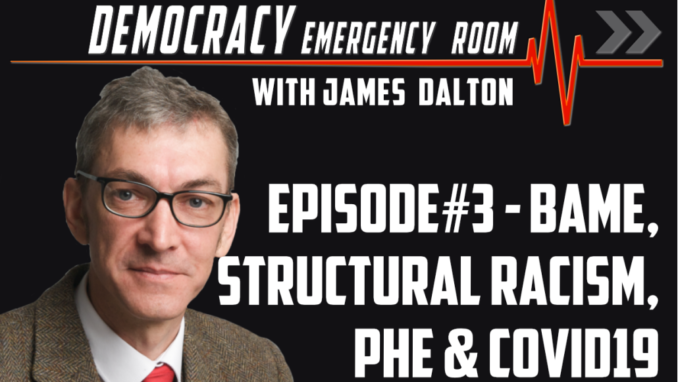 There was a time when the love of money was the root of all evil. Then socialists in schools tweaked that lesson ever so subtly and suddenly, unnoticed, money was the root of all evil. Latterly, we learn, we got it wrong. Racism is the root of all evil, a fact previously hidden from Western civilisation until recently. Structural racism explains a lot, evidently. On TV, online and in the papers, whatever the problem, racism seems to have a role to play in it somewhere and there are ‘experts’ with high paid jobs to tell us why. If the UK public leave the corrupt politicised academic and political elites to continue with their current insanity of policy and rhetoric for much longer, the Labour and Conservative Party will have racism promoted to the Periodic Table. Perhaps this, along with the sabotage of the credibility of pure sciences and maths as subjects that perpetuate ‘white supremacy’ is the ultimate aim? A weighty radioactive element with Symbol Blm? We can but hope that “Structural Racism”, this pseudoscientific manifestation, has an exceedingly short half-life.

And so, it came to pass that COVID-19 tested positive for racism. It didn’t take long to discover that racism can influence a virus. In June 2020, the first links between COVID-19 and ‘Structural Racism’ were formalised by Professor Kevin Fenton (PHE) and his team in their publication “Beyond the data: Understanding the impact of COVID-19 on BAME groups.” A more appropriate title would be “Understanding how to use an epidemic to milk the tax-payer for all he’s worth to engage numerous ‘stakeholders’, especially from the ‘BAME Community’, to write endless pap in indecipherable ‘English’ about how ‘white privilege’, ‘unconscious bias’, ‘structural racism’ and ‘racial injustice’ are to blame for excess BAME COVID19 deaths and Vitamin D deficiency is nothing to do with it.” That’s a bit of a long and clumsy title I know, but long and clumsy suits the content of the Public Health England report.

Through Common Purpose our institutions have been politicised over generations. Professor Kevin Fenton has all the hallmarks of a Common Purpose culturally Marxised and dehumanised ‘suit’. Westminster, Whitehall, and Public Sector Chiefs have the same shiny, Saville Row mannequinesque whiff about them. He could be having a real impact on saving lives through his role as an educator with the voice and reach he has as a PHE Director. Instead, Professor Fenton plays politics with people’s lives and when given opportunity in the press, he chooses to speak about himself or ‘structural racism’ rather than provide his audience with basic advice on nutrition and the benefits of Vitamin D supplements may have to all our immune systems, advice which could well save lives. The champagne lifestyle and awards ceremonies with Lewis Hamilton and the boy Stormzy have so much more appeal than a street campaign in Tottenham on nutrition, or a kick up the backsides of local GP surgeries to get up to speed on the usefulness of Vitamins C and D, Ivermectin, Hydroxychloroquine and other medications now demonstrated to be effective in fighting COVID-19.

In the accompanying video “DER #3 – BAME, Structural Racism, PHE & COVID19”, Cllr James Dalton of the 5 Star Direct Democracy Party highlights how PHE acknowledge the role of Vitamin D in health outcomes while maintaining an overriding emphasis on ‘Structural Racism’ as being the key area for discussion and further studies. Furthermore, the scientific record attesting to the prevalence of insufficiency in Vitamin D across all ethnicities (but particularly those with dark skin) is presented along with the up-to-date data in respect of Vitamin D and COVID-19 treatment.

While the UK population has witnessed the Government destroy their jobs, freedoms and hope, the very people who sit in the top seats of our public sector institutions play politics with our lives and fail to undertake the simplest and most basic of things in a competent manner.

The UK suffers from the wrong people being in key roles. This is a symptom of long-standing corruption within the political and government establishment and the continuing generational nepotism which stretches beyond politics and into journalism, entertainment, academia and most if not all public institutions. Jobs are filled by ‘the right people’ who sing from the same progressive hymn sheet – and it isn’t a Brexit or a patriotic hymn sheet either. A political revolution is required to unseat the Labour and Conservative ‘UNIPARTY’ and to cleanse our public institutions of the political appointees that befoul them.

Direct Democracy gives no weight to politicised ideologues, to political correctness or divide and rule politics. 5 Star Direct Democracy and government by the UK people with the consent of the UK people is the way to remove the parasitical, politicised culture which corrupts UK political decision making, which impoverishes our nation of wealth and of heritage, and which in times of crisis such as a pandemic, is costing and has cost countless lives.

Some Interesting facts: Carbon Dioxide is a trace gas and currently accounts for approximately 405ppm (parts per million) or approx. 0.04% of the earth’s atmosphere. 200 years ago in 1820, it is estimated (ice core [more…]

Walk on the Wild Side

You know what they say, ‘if you can’t stand the heat, get out of…’ So, on a sticky, sultry summer’s day we decided to do just that and headed out of the bustle of the [more…]

Pretext for Dystopia – You Lucky People, Part One

By titling their recently published World Economic Forum treatise Covid-19: The Great Reset, the evident glee with which the authors – economists Klaus Schwab and Thierry Malleret – greet the pandemic as a harbinger of [more…]