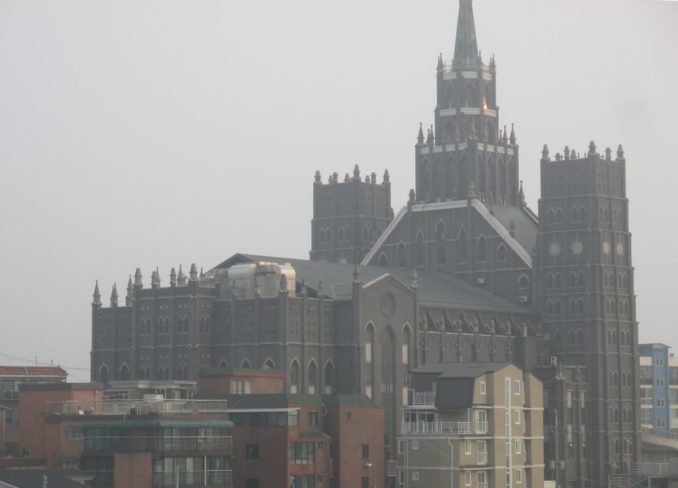 Suwon is a city of about a million people, about an hour south of central Seoul by train. I suppose you could call it a scaled-up Korean version of Guildford, on the edge of the Korean Home Counties. Occupying a bowl in the hills, it’s an attractive, busy and affluent commuter-cum-company town, a desirable place to live in every way. If you own a Samsung device (and who doesn’t these days?), you have a slender personal connection with the place, for though it makes much of its kit in China, the conglomerate is headquartered here. This is Samsung City.

Suwon—“source of the water” —has a history going back well over one thousand years, and, unlike most ancient Korean cities, quite a lot to show for it, notably the Hwaseong fortress and the only complete city wall in the country. That is where I begin this little skate over Korean history and culture. The visits were made during my stay in South Korea in 2017.

Probably the walls are the more rewarding destination than the fortress. To reach them, you climb a long stone stairway lined with lookouts and turrets and decorated with the Korean equivalent of chivalric pennants, which flapped gaily in a stiff breeze. At the top, the walls were nowhere near as grand or forbidding as their Chinese models (the walls of Xi’an, for example, are higher than many office blocks and wide enough on top to host a tennis tournament) and probably would not have held off a professional army with a few dozen ladders for more than a morning. But they made for a glorious circular walk round the heart of the city, following a line of hillocks. Fine vistas spread out to every horizon. On the inside of the walls was a belt of woodland alive with autumn colours and flitting birds. The autumn colours are a secret glory of both Korea and Japan, ranging far beyond Britain’s damp yellows and browns to embrace vivid purples, reds and oranges. From afar, a wooded hillside at the height of autumn can resemble a flower-bank.

The walls seemed built more for decoration than defence. They were hardly needed anyway. For one thousand years after the Mongol invasions, Korea was a backwater. Though buffeted by the repeated tumult of dynastic change in China, it retained a kind of independence up to the Japanese takeover, and only really experienced full-scale war twice before then, in the 1590s, when the Japanese invaded, and in the 1600s, when the aggressors were the Chinese. The Hwaseong fort, which was built in the late 1700s, never saw action. It was built by King Jeongjo, partly as a kind of memorial to his father, Prince Sado, who had been murdered at a time of domestic political tension by the intriguingly Oriental expedient of being starved to death in a rice vault. 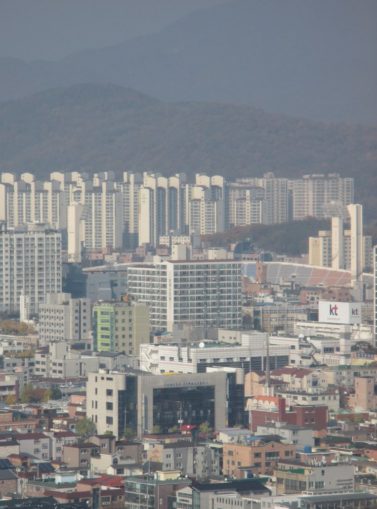 The fortress, a UNESCO world cultural heritage site, was not what I was expecting. By no stretch of the imagination could it be described as a stronghold. It is now a just collection of completely unprotected wooden halls, the few defensive installations being along the old walls in the hills above. I had anticipated something akin to Japanese or Chinese castles, with multi-story towers and huge embankments. But this was more like a palace compound, which is what it actually was for much of its life. King Jeongjo had intended to relocate the capital to here from Seoul, but the idea was dropped and the fortifications were never built.

Still, it was pleasant to poke around the courtyards and verandas, peeping into the rooms with their sliding doors and paper windows. In old Korea, women were cooped up in these courtyard houses most of their lives, in special quarters called anbang, so that men should not see them in public; Korea remains the most puritanical Far Eastern country. I was always reminded of this when I visited a traditional Korean dwelling. Beautiful and peaceful it may have been, but it was incarceration nonetheless, and a reminder of the petrification of society that had occurred under the long-lived Yi dynasty. Contrary to popular misconception, the Japanese shogunate was a progressive, vigorous and adaptive regime, which avidly studied advanced European knowledge and was able to prepare itself and successfully ward off the ironclad might of the western powers. Under the Yi, Korea suffered five centuries of repression and social stultification. Eventually, that left the nation prostrate.

Imposing as the Hwaseong fortress is, for me, it was not the most remarkable building in Suwon. Anybody who has walked the old walls, or scanned the city skyline from more or less any vantage point will know this landmark, yet it appears in no tourist guide that I know of. I refer to the Suwon Jeil presbyterian church, a humungous neo-Gothic pile in mud-black brick that stands on a hilltop towering over half of central Suwon. Imagine an old Manchester cotton mill blended with the Warsaw Palace of Culture, with a spire on top, and you get the idea. When I first saw it, I wondered, have I found the ugliest building on earth? But on other visits to Suwon, the great hulk began to grow on me. It had the most extraordinary presence — a dark, half-surreal charisma I had never sensed before in another building. I wanted to know more about it.

Its size made it appear closer than it actually was from Hwaseong, and it took half an hour of blundering around one of those confusing meshes of alleyways that make up older Korean residential areas before I got there. More by luck than design, I eventually emerged before the mighty façade. I counted over a hundred windows. Dusk was now approaching, and they had switched on a big neon red star in the middle, of the kind so beloved of Eastern Bloc governments, and below that, in green neon, hangeul reading Suwon Jeil Gyohoe (Suwon First Church). I felt like I had wandered into a video game. I half expected to see Godzilla’s head appear over the roofline, or giant lizards clambering along the ledges.

This is not apparently the biggest church in Korea, but it is the biggest one I’ve seen that is actually a church and not a glorified lecture theatre with a cross on the roof. Built in 1953, it is over fifteen storeys high at its highest point, counting the ranks of gothic double-arched windows, and can accommodate a congregation of five thousand people. It was the first church I had ever seen that incorporates a multi-storey car park, with spaces for hundreds of vehicles. Yet the nave was in use only two days a week: there were six or seven services on Sunday, starting as early as 5.00 am. 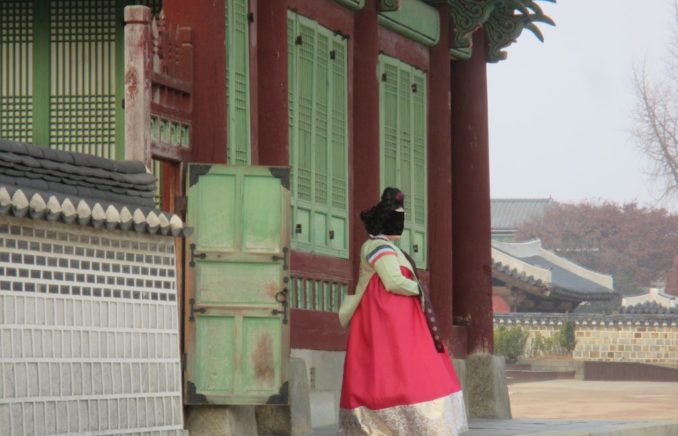 These facts I learnt mostly from the women in the lobby café at the base of the façade: even though it was not a service day, the place was staffed, because Korean worshippers generally are very keen, and because Suwon Jeil church has an extensive outreach program, its website says, for the homeless, people from broken homes, the terminally ill, foreign workers with problems, the handicapped and the penniless. Given the thinness of South Korea’s social security net, I would imagine this sort of thing takes up a lot of its resources. It also works with local schools and sends out missionaries. They would not let me have a look at the nave, with its five thousand seats. The pastor, given on the website as Raveen Burra, was away that day.

I mention all this because, despite being an atheist, I have a bit of thing about religion in Korea. That’s largely because the social embedding of the Protestant sects here is probably the single biggest and most visible way in which South Korea today is distinguished from China and Japan, which are both fundamentally non-religious societies, although Christianity is making impressive inroads in parts of China. (In Japan, the long-established and nationalistic quasi-religion of Shinto fills the void that missionaries target in China and Korea). Indeed, South Korea is one of only two countries in all of Asia where Christianity has truly taken root, the other being the Philippines, where Catholicism was imposed on the people for four centuries by the Spanish.

But in South Korea, there was no top-down evangelisation. The work was done piecemeal, by missionaries, those sowers of the seeds of faith. So why did Korea prove such fertile soil? I will talk about that in the next part.

The full travelogue, Uri Nara, can be found at:

What is “monoculturalism”? Take a trip around the internet and you’ll find out that monoculturalism is defined as “the cultivation of a single crop in a given area”. That’s all well and good and the [more…]

Across Hubei by HSR

In spring 2013, I travelled by train across China from Guangzhou to Qingdao in the north via Wuhan. This part starts in Wuhan, from where the high-speed rails led northward from Hubei Province and across [more…]