Several attempts at an article have been made by me during the past year or two, but they have never made it past the “put flesh on the bones” stage. Having assessed a few more ideas, I felt that this little snippet might provide something a little unusual and possibly of interest to any collector-puffins seeking new treasures.

The discovery of a commemorative for the Mars Viking craft of 1975 got me started. I found it listed under World Coins in a dealer’s catalogue…. chuckled at the placement of it and duly acquired it. That was the start of a collection that is now approaching 200 items. 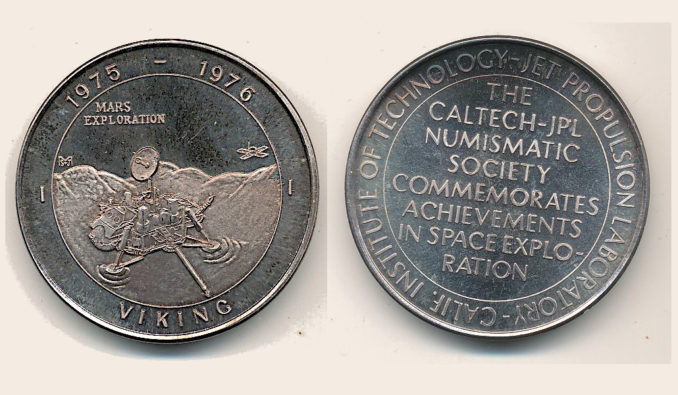 This is a silver coin produced by the JPL Caltech numismatic society, one of a small set of (I think) 14 commemoratives. Vikings 1 and 2 went to Mars in 1975

Space exploration has yielded a colossal number of commemorative coins and medallions, stretching all the way through time from 1957 to the present day; from Sputnik to Mars Rover and further again.  Most people are familiar, for example, with Apollo 11 and the moon-landing—whether it was staged theatre or not is something that I don’t wish to debate right now, but maybe someone else might pick it up as a subject. There are countless dozens of Apollo 11 commemoratives, many appearing in Ebay searches and occasionally dealers’ catalogues.

Here are a few examples from my own “haul”; 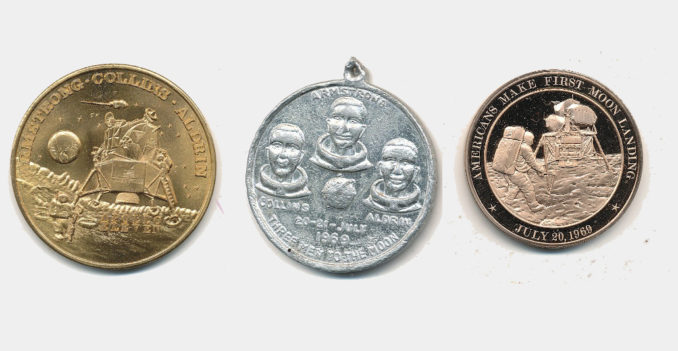 These medallions can range from copper, white metal and pewter at the cheaper end; through to bronze, silver and occasionally gold-plate or gold ( I don’t have any of the latter!). The designs vary wildly in quality, from sketchy cartoon-like figures to neatly-struck fine detailed scenics.

The other well-known mission is Apollo 13, a disaster thankfully averted and the crew returned safely. Interesting to note that this mission was in 1970, therefore this year of 2020 is the fiftieth anniversary. Again, a couple of items seen below; the first is a grey metal medallion (it has German language on the obverse) showing a rather nicely modelled group of horses pulling the Apollo chariot. As with all these collectables, the quality of design varies widely. The second one shows the Apollo13 capsule plus moon-lander, which was eventually jettisoned, having never achieved its goal. 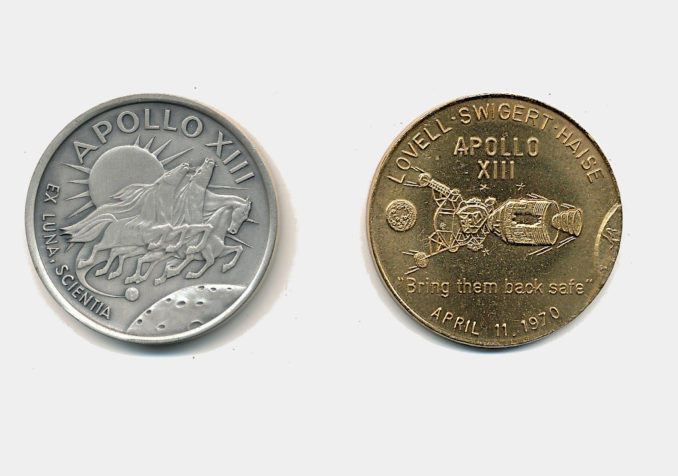 The original crew was intended to be Lovell, Haise and Mattingly; but Mattingly was taken ill before the launch and Swigert was his replacement. The coin below was therefore presumably struck before the crew change took place. Not certain but I think this is a Galaxy Mint production. 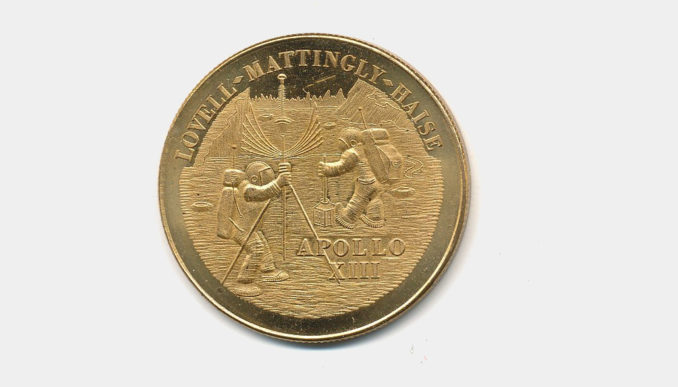 In the 1960’s, the Mercury missions were commemorated with quite a variety of medallions. At this time, we witnessed people such as Alan Shepard and John Glenn making historic flights; Alan in Mercury-Redstone 3,  as the first American in orbit (5th May 1961); Virgil Grissom followed him as the second man, in Mercury 4; then John Glenn in Mercury-Atlas 6, the first American to orbit the Earth.

Several USA mints were busy producing these coin sets and you can still find them on Ebay, being sold by a variety of dealers at very reasonable prices; my first ones purchased about six or seven years ago were between £3 and £8 (excluding delivery).

Yuri Gagarin beat them all to it, though and we’ll mention him later.

The two copper tokens above were made by the Danbury Mint. The white-metal central one was made by Affer, of the Italian Mint, in its typical style of high relief work

These are not large coins, being around 25mm-30mm average diameter (I haven’t measured all of them but think of something just a bit larger than a 2p piece).

From Mercury missions to Gemini and these numbered twelve in all, including a space-walk of June 3rd 1965; Gemini 4, with James McDivitt and Edward White. Let’s not forget that the Russian astronaut Alexei Leonov was the first to space-walk, on 18th March 1965, from his Voshkod 2 capsule.

Below, the first medallion is a white metal one from the Italian Mint; then a brassy-coloured coin from the Galaxy Mint, Florida; followed by the First Rendez-Vous in Space; Geminis 6 and 7; a medallion from the Franklin Mint

The series of Apollo missions got off to a disastrous start, as Apollo 1 was incinerated on the launch-pad; claiming the lives of Virgil Grissom, Ed White and Roger Chaffee   in January 1967. It is a little unnerving to recall that Grissom almost lost his life after the splash-down of Mercury 4, when the capsule flooded. The medallion below left is a little commemorative made by Affer, Italian Mint, in typical high-relief style: next to it is one from the Franklin Mint.

There were 17 Apollo missions altogether; not all were manned, they started at number 7. Apollo 8 (Borman-Lovell-Anders) is famous for the photo taken of “Earth-rise”.  Apollo 11 landed on the Moon, while subsequent visits continued with various projects, including riding on moon-buggies to explore the landscape further afield and collect rocks. Not all commemoratives are small in size, by the way; for example here’s a nice chunky one for Apollo 17 that measures two and a half inches across; made by the Medallic Arts Company (or MACO for short). 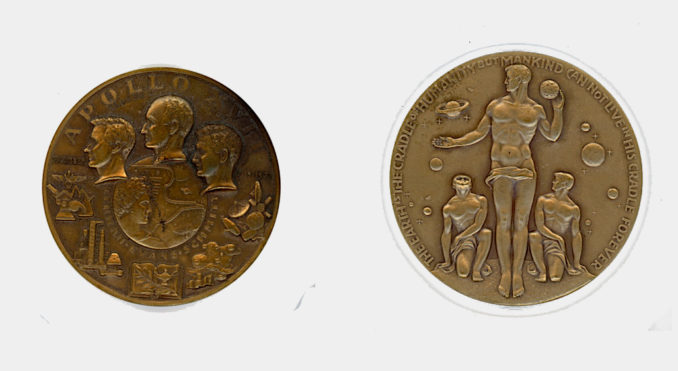 From these missions one can move on to space-station medallions such as those for Sky-Lab, and of course the Space Shuttles; plus a whole host of satellites and other unmanned vehicles. Many of these coins were crafted by the Franklin Mint, which has turned out numerous series of bronze, silver and gold collectors’ items.

But what of Russia? Well, there are memorabilia for their missions as well, of course. Some are of their time, others were struck well after the event; but that can also be said for quite a few medallions in the USA series as well. This rather large and somewhat crusty table-medal below is probably of its time, though; it celebrates the launch of Luna 1 in 1959, featuring the rocket on one side and a description on the other. Made of bronze, it is about two and a half inches across (that’s about 62mm or so). 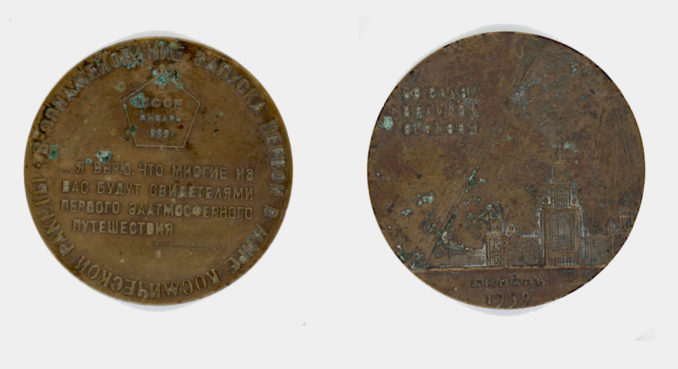 This was issued by an American magazine as a “coin of the month”, the same as for the two small medalets below. The first celebrates Sputnik 1 and the second one the Vostoks 3 and 4 space rendez-vous, manned by astronauts Andriyan Nikolayev (3) and Pavel Popovitch (4).

One of the nice things about space missions is the number of pin badges to be found (there are plenty of American ones, but my first encounter with pins was via a Russian Ebay seller). I had not intended collecting these but got tempted with two or three and now have over twenty; for example these:

The Mars 2 and 3 mission was a landing-vehicle and an orbiter, sent up in 1971. The lander crashed into the Martian surface. The two dogs (on a separate mission) orbited Earth in Sputnik 5 in 1959; they returned safely. Lunokhod 1 was the first Moon exploration rover in 1970; another 50 year anniversary coming up at the time of writing.

I’ve focused on medals, medalets and badges because to me they feel substantial in the hand. However there is a mass of paper ephemera for those interested; postcards, first day covers, astronauts’ patches, other stamps, certificates, newspaper cuttings, etc etc.

Once you start looking at space exploration medallions, you realise just how many have been made and how vast the potential is for collecting them. Other countries besides Russia and America have made them so the range is huge. They may not be  all world-beaters in terms of rarity or value; and may not be worth much more than what I have paid for them when my time on this Earth is done; but they carry much history with them and many have been delightfully made. I simply enjoy them for what they are.

Identification of some pieces has been difficult, but I have managed to find a few websites where keen collectors have displayed items and given good descriptions, so I am grateful for those; in particular https://www.spacecollection.info

The previous article I did about collecting space coins was quite broad; I included quite a few examples of all ages, sizes and themes. Since then I’ve added several more items to the holding; well, [more…]

Prior to becoming interested in precious metals I had never visited the inside of an auction house, let alone placed a bid. However, during the last lockdown I discovered that auctions can be a rich [more…]

I have been wondering how to continue with articles on the space-coins collecting theme. It is a vast subject and open to many directions of thought. However, a glance through history quickly shows that 2022, [more…]