I have been wondering how to continue with articles on the space-coins collecting theme. It is a vast subject and open to many directions of thought. However, a glance through history quickly shows that 2022, like ‘21,  is quite a significant year for space-travel commemoration.

Yes, there are a number of 60th Anniversaries up and coming this year. We’ll have a look at these before moving on to a few of my more recent acquisitions.

Now, depending on when the Chief Puffin publishes this article, you will be looking forward to, or will have just missed, the first of these special occasions.

It is on 20th February 2022 (digitally, 20-02-2022),  the flight of Col. John Glenn in the capsule named Friendship 7, launched atop MA-6 (Mercury-Atlas 6) rocket. The figure 7 has puzzled me for a while, but I learn now that it was used to denote the teamwork of the original astronauts….the “Mercury 7” as they were known; Shepard, Grissom, Glenn, Carpenter, Schirra, Cooper and Slayton.

In May 24th 1962 Mercury 7 was launched, piloted by  Scott Carpenter; the capsule named Aurora 7.   Originally Donald Slayton had been allocated the pilot’s job, but it was discovered that he had an irregular heartbeat and therefore was stood down. The mission itself was similar to that of Mercury 6 (John Glenn); to evaluate the effects of space-flight on the astronaut; also performance of the manned craft and making comparisons with previous flights; and studying the effects of any changes made to the various onboard systems.

The mission was not without issues. To begin with, its take-off was delayed three times due to various malfunctions. When it finally did get away, it was discovered that some circuits had failed, affecting the pitch horizon scanner.

One of the two experiments placed on board the craft did not work properly. However, a puzzling phenomenon was solved; the “green fireflies” that Glenn had seen from his Mercury 6 capsule, as he approached the sunrise part of his orbit, turned out to be frost from the reaction control jets.

On 10th July 1962  the Telstar communications satellite was launched.

On the 11 and 12th August 1962 Vostoks 3 and 4 departed from Baikonur  to eventually make the first space rendez-vous (well, within a couple of miles of each other, I read); and also the first craft-to-craft radio contact. Andriyan  Nikolayev in Vostok 3 and Pavel Popovich in Vostok 4.

Mariner 2 successfully made it into orbit, unlike its predecessor Mariner 1 which was launched on July 22nd 1962 but had to be destroyed due to a deviation from the planned flight-path. The coin here is again from the Franklin Mint’s highly-productive store, showing the probe and giving details of its mission. Just checking, I showed it in the previous article, Collecting Space Coins part 2. I haven’t  as yet come across any other medallions featuring Mariner 2.

This following statement is from the NASA Astronautical and Aeronautical Events of 1962 (the pdf is freely downloadable):

Venus on fly-by mission. Instrumentation aboard the 447-1b. craft included a microwave radiometer to determine the surface temperature of Venus and details of its atmosphere; an infrared radiometer to determine fine structure of cloud layers; a magnetometer to measure changes in Venusian and interplanetary magnetic fields; ion chamber and particle flux detector to measure charged-particle intensity and distribution in interplanetary space and vicinity of Venus; cosmic dust detector to measure density and direction of cosmic dust; and solar plasma spectrometer to measure intensity of low energy protons from the sun.”

Schirra’s mission was generally uneventful but successful; splashing down after six orbits. He preferred to be towed and then winched on board the carrier, before exiting the capsule.

On 1st November 1962   the Russian Mars 1 probe was launched, from Baikonur.

Maybe not so exciting as a manned mission, but nonetheless this little craft, measuring around 11 feet by 3.5 feet, set off bravely from its Baikonur launchpad in late 1962 with the intention of coming within 7,000 miles or so of the surface of Mars. It was fitted with equipment to take photos of the surface and also detect magnetic fields, radiation, atmospheric properties and other scientific data.

The craft suffered problems with its orientation system; but was successful in sending over sixty radio transmissions back to Earth. Sadly, after travelling over 66 million miles from Earth towards its Mars target, the craft ceased all transmission. This happened on March 21st 1963. It is thought that Mars 1 came within 120,000 miles of the red planet, before heading off on its final date with the Sun, to go into orbit. Is it still there? I don’t know. If it is sufficiently far out it might be, otherwise it will have burned up.

I do not know of any medallions, but there is at least one stamp illustrating the probe (and I don’t have one! Yet). That stamp is shown below, along with a mirror-surfaced pin-badge that I do have:

As a little extra; there is an intriguing 50th anniversary that has just gone by without hardly anyone noticing it (including me). I only discovered it during my reading-up of information to place in this article. More on that just further down.

On 13th December 1962  Relay 1 was launched from Cape Canaveral.  This was a communications satellite, picking up signals from a ground station and passing them on to another.  The satellite operated for just over two years. A second Relay was launched at the start of 1964.

Thus ends my list of 60th anniversaries (I don’t think I’ve missed any but you never know!).

Now… just to keep things on anniversaries, what about a 50th? What happened in 1972? Well, there’s Apollo 16, for example, launched on 16th April 1972 via a Saturn V rocket. Later on 7th December 1972 we saw the final Apollo mission, 17. Suddenly, those exciting moon missions were coming to an end, leaving behind the heady days of the 1960s.

The Apollo 17 medallion is pictured in my previous article Collecting Space Coins part 1.

Now, what about that other intriguing 50th anniversary? While searching for more details about the Russian Mars 1 probe, I came across information about Mars 3. This craft was the first to make a soft landing on the surface of Mars, on 2nd December 1972. However….a Martian jinx continued to plague the Russian teams. Virtually every probe that they had directed towards the Red Planet had either gone off course, failed to reach target, or crashed. Mars 3 looked as if it was going to escape the jinx…..but no.  Just fourteen seconds after landing safely, its transmissions failed. It managed to send back a very spotty photograph, looking for all the world like a pile of white radio noise. The surface of Mars at this time was also experiencing a very bad dust-storm. Had the Mars lander been struck by whirling piles of grit? Had it simply been unfortunate to arrive at a bad time?

The website RadioFreeEurope-RadioLiberty carries an article on this whole mission;

And, for the collector? No medallion that I know of….but there was a stamp, as shown below:

Now, what of recent things? Well, I haven’t been quite so active in buying, but at the same time I have also been confounded by the high postage prices that regularly present themselves on Ebay. On more than one occasion the cost to deliver it to the UK has been greater than the price of the coin, or the starting bid. It is tempting to override the concern, but it also much depends on the scarcity or perceived desirability of the item.

Despite that, I was happy to secure the medallion below, which commemorates the launch of Sputnik in 1957:

It is two and a half inches across and made of bronze.  The little that I managed to find out about it showed that it is a propaganda table medal, with an estimated issue of around 640 pieces. I can’t unfortunately check that out further, at the moment.

Paper ephemera are considered less durable than solid metal, for obvious reasons; but during a desert-like period of medallion shortages of any reasonable quality, I do look at stamps and postcards, particularly those “of the time”,  I.e they have postmarks on them showing the date and place. Here are some that I’ve acquired since the previous article:

A few curiosities I gathered were these; QSL cards. These are issued to radio amateurs who make contact with specific individuals or stations; notably during competitions. Although the activity in itself is not related to space-travel, the QSL card designs in these particular instances did have space themes; 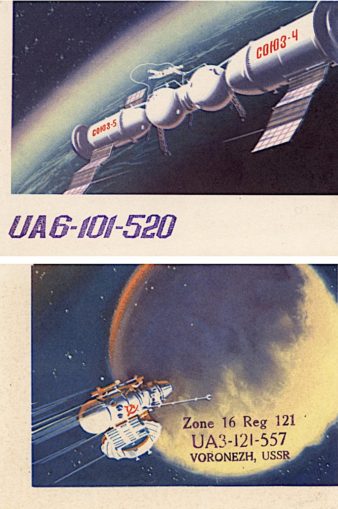 You can see the conjoined Soyuz 4 and 5 craft, first making physical contact with each other on 16th January 1969. The card’s reverse gives the amateur-radio operator’s call-sign and other data concerning the radio contact made .

The one below is  depicting the Russian probe Venera 4, which was sent out from Baikonur on 12th June 1967.

Here’s the definition of QSL as shown on Wikipedia:

Incidentally there’s no particular reason for the Russian slant on my collection, it’s just that quite often the items available from there are more numerous (and the postage is more sensible!).

At present, Ebay is the main source of these collectables for me, but I’m sure there are others. It was interesting to read an article in the Autumn 2020 issue of Spink’s “Insider” magazine about a young lady who has started a collection of space-travel themed stamps, challenge coins and first-day covers.   The subject-matter is yet young and probably has more immediate appeal to the younger budding collector. The 70th anniversary of Sputnik is due up in 2027. There will no doubt be much more for collection in the years ahead. I started mine in 2012 and had the good fortune to hoover up quite a few pieces at reasonable prices because there did not appear to be many collectors in Britain at the time. I think that is changing; and in fact I welcome it, because otherwise in the future my own collection might be consigned to the dustbin by someone.

I shall probably make this the last collectables article, I don’t think I can stretch the subject much more at this point. Whether you like stamps, coins, posters, patches or books, there’s something out there with a space theme ready and waiting to be collected.

One last mention; for a website that is absolutely crammed full of data on space missions (not coins or stamps unfortunately); is Gunter’s Space Page;

Amazing the amount of information at this place.

In case the subject is off-putting, it may assist if I give a brief history of my own collection. It became a hobby of middle age. I had very little knowledge of the subject and [more…]