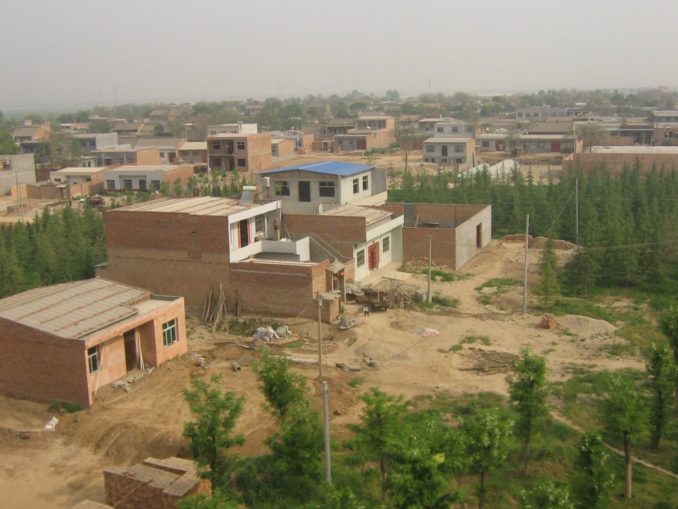 In spring 2013, I travelled by train across China from Guangzhou to Qingdao in the north via Wuhan. This part starts in Wuhan, from where the high-speed rails led northward from Hubei Province and across central China.

After years of familiarity with the Chinese language, I did not think there were many place names that could floor me, but in Shijiazhuang, I once more met my match. The nearest you can get to it in English is perhaps shiJARjwang. But I kept mixing up the jwang and the jar, and getting the tones wrong. And I just could not get my mouth round the three slobbery main consonants without gobbing all over the other guy’s chest. After a day of being tripped up by the wretched word, I had come to hate the place before I had even seen it.

Unless you are on a train journey, you don’t ordinarily have much cause to go to Shijiazhuang, which is a kind of scaled-up Chinese version of Reading. But today was going to revolve around it.

The day started at the ticket office at Hankou station (part of Wuhan), where there was, as usual, a guy hanging around the counter trying to do some kind of deal with the guy at the front of the queue. This was a constant annoyance. There was always somebody trying to beat the one-ticket-per-ID rationing rule. Or maybe he had forgotten his own ID, or was just trying to queue-jump. Who knew? A man behind me ran out of patience at these antics and bellowed “Paidui!” (Get in line!); the offender just stared back in a dull-eyed, simian way, and after a moment of thought withdrew.

Because of the constant attempts to cheat, ticketing areas always had big signs saying “Purchasers must use their real name.” The rules did not seem very strictly enforced, though. The guy in front of me bought his ticket on a crumpled, unverifiable photocopy of his ID, which seemed to defeat the whole object.

Instead of trusting to luck as I had done so far, I really wanted to plan the rest of this journey now, but there was no network map or much other information of any kind at Hankou station. So I sat down with my magazines in the skylit main hall, which was possibly the largest single covered public space, without any supporting pillars or girders, that I had ever seen. If the floor had been turfed over, Arsenal could have played Everton here, and a few thousand supporters could have watched too. It was so big, you could see the haze in the air when you looked at the far end.

My service to Shijiazhuang was another bullet train. Leaving behind the lakes and waterlogged paddy-fields of the quiet Wuhan hinterland, where water buffalo outnumbered the cars, we zoomed northeast-wards into the central plains and their familiar, geometrical landscape, of straight roads, huge square fields and even square ponds.

Every few kilometres, a tardis-like sentry box would flash by, a post along a security fence that evidently ran the length of the line. Presumably the boxes housed equipment and were unmanned — the train ran too fast for you to tell. If not, there was a small army patrolling the line. I assumed they were there to stop terror attacks.

Much later, I learnt from a railway works quality manager I met somewhere that the real reason was to stop villagers using the smooth trackbed as a shortcut. Incredible as it seems, they had been known to ride motorised three-wheelers up the line during the works, and, until the sentry boxes were added, to tear down the fencing.

Occupancy on the line was between 60-90%, depending on time of day, the woman at the food counter in the restaurant car estimated. Yes, it was always busy. Travellers were mostly fairly affluent, but all classes were represented now. 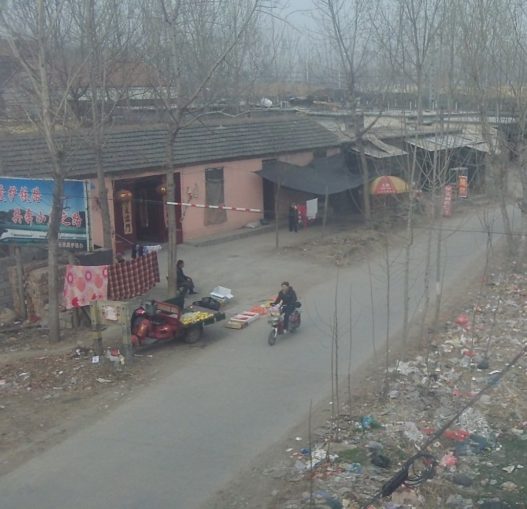 Perhaps nothing embodies China’s rise more dramatically than the high-speed rail network. Riding it invariably put a smile back on the face of this old China grump, “As fast as the wind, and as clean as the blue skies,” the Chinese say, or they do according to my main cribbing source here, an article that appeared in Yazhou Zhoukan newsmagazine in January 2010. You cannot talk about it without floundering in a morass of superlatives that lose impact the deeper you wade. But here goes anyway.

It is by far the world’s biggest high-speed rail system, with nearly 16,000 miles of line. It runs 1,800 dedicated train-sets. They include the world’s fastest units, with some trains getting up 394 km per hour (maximum speeds were lowered following the Wenzhou accident in 2011 that killed 40 people). It is the most expensive high-speed network, at nearly $200 billion and counting. And it was built in the shortest time — largely completed in the ten years since the short Beijing-Tianjin line opened in 2008. Ten years to build enough high-speed line to girdle two-thirds of the earth, every inch of which has to be accident-proof.

To put this achievement in perspective, consider for a moment that it is going to take a slightly longer to complete the reopening of the Oxford-Bedford stretch of the revived Varsity line, a distance of around 50 miles. Approved in 2011, this gargantuan endeavour, involving engineering challenges like the Milton Keynes bypass system, Ot Moor south of Bicester and the wild undulations of the north Chilterns, is now scheduled to complete in the mid-2020s.

Doubtless some will argue that the Oxford-Bedford line is likely to be safer than a Chinese bullet line. Maybe. But, in fact, with one huge, tragic lapse, the safety record of China’s high-speed rail system is looking pretty good at the moment. Each year over a billion journeys are now made on the Chinese high-speed railways (another record). There hasn’t been a fatality since Wenzhou, a low-speed collision due to a signalling error.

The key to this success, I was once told by a railway engineer I met on another train journey, was renli. “Human power.” Just for once, China’s enormous population was an asset. “Because you can deploy 100,000 people on the build, and you can have a pair of eyes checking every bolt and weld.”

It would be tedious to list the benefits of this colossal gamble by the government, but it is perhaps necessary as the whole project has been called a waste by certain overseas observers, who, I would bet, have never tried to cross the country in a K-train at Chinese New Year on a local budget. Apart from the obvious things — the fact that most major destinations in China are now a day’s ride away at most, as opposed to nearly a week before in the case of the remotest cities — and the almost unquantifiable economic and social benefits of such improved mobility, the system has reduced China’s dependence on oil, which it is short of, triggered growth clusters all over the country, made possible a commuter lifestyle around the big cities, boosted China’s technology exports and improved its image globally. It has given Chinese people something they can be unequivocally proud of that didn’t happen 2,000 years ago, and also something they can export to others, as they are doing under the equally gargantuan Belt and Road project now underway.

Much of the network is already operationally profitable, though the underlying capital outlays will take years to recover, if they ever are recovered. 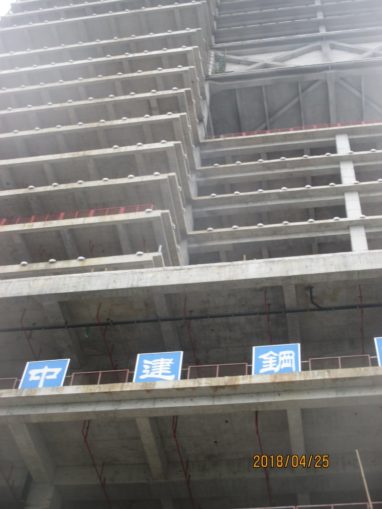 At the train’s food bar, I ordered a spicy boxed lunch called Chairman Mao’s Roast Pork and Rice, wondering what the international reaction would be if Russian dining cars offered Comrade Stalin’s Borshch or Austrian ones Adolf’s Favourite Wurst. In a way, though, the name was fitting, as this railway project could be called the successful twenty-first century reboot of the Great Leap Forward. But the Chairman Mao was off today, she said, so it was diced chicken and rice.

Dull overcast weather, and dull, low-lying scenery. In a world of grey, the main roads were black, and the lanes leading to the villages were dirty white strips of concrete. I leafed through another magazine, left on the seat, this one with the ridiculous and insulting strapline “Why do the Japanese love war so much?” Go into a British station newsagent, and half the magazine titles will be about computer games and steam trains. Go into a Chinese station newsagent, and you will be surrounded by war. Historical battles, modern weapons systems, military tactics — every aspect of war is packaged and re-packaged by China’s magazine publishers, constantly reminding people of the old enemy to the east and girding them to face the new one, the one beyond Japan.

We left Hubei Province and sped north. The villages had switched back to the single-storey walled brick barrack type that is the norm all over the north. The greenness was gone and the trees were bare. With my neighbour, a talkative professional of some kind in his forties, I had a rambling and half-understood conversation on rural improvement, human rights, light rail projects, irrigation and canalisation. Oh, and religion. The detail escapes me now, but one line stuck out. His home town, Baoding near Beijing, was apparently a stronghold of Catholicism. Was he a believer himself?

“No,” he replied. “If a people have patriotism, you don’t need religion.”

We fell into silence. After several hours, we pulled into Shijiazhuang in the central northern province of Hebei (“north of the (Long) river”; Hubei is “north of the lake”). Here bad news awaited: no trains to Qingdao until the small hours, and I would be twiddling my thumbs in a station forecourt for ten hours. [To be continued]

Note: Some HSR and other stats in the above were updated by me in 2018.

Taken from my free travel book about China, Shenzhou, a copy of which can be read or downloaded at this website: https://www.itabibito.com/ (scroll down to the middle of the page)

The Master-Builder of Brussels

Brussels. Is there any less loveable west European capital? The moment you step out of Bruxelles-Midi station — after all these years, I still forget that Midi means south, not central — your heart sinks. [more…]

http://loans-cash.net When you think of the north of England, you think of fells and moors and hill farmers, of ruined abbeys and windswept Wolds, of gaunt mill chimneys, of terracing lurching crazily up bare hillsides, [more…]