In previous parts we have covered the basics of Newtonian mechanics, there is a lot more here but the basics provide enough to at least start to use this sort of stuff.

So lets have a look at a practical example, a fairground ride, the “centrifuge”, you know the one, you stand inside a large cylinder which spins, pinning you to the wall by “centrifugal force” (which as we saw in the last part is really a reaction to the centripetal acceleration), then the thing tilts and you stay in place against the force of gravity.

This then leads into the question that started all this off, given the earth spins why are you not flung off by centrifugal force? And why don’t you weigh less at the equator?

Fairground ride first, these are this sort of thing: 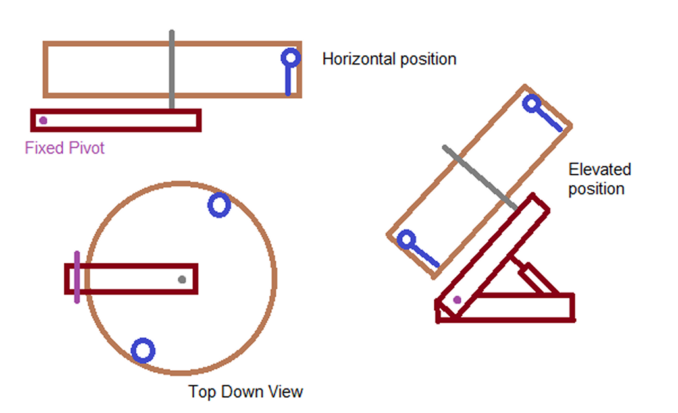 Basic operation is thus, you are robbed blind, get into the drum or cage (brown) and stand, usually strapped for safety, at the rim, back against the outer wall.

The drum is accelerated to a constant angular velocity and you are “pinned” to the walls of the drum by the centrifugal force. The drum is then raised to an angle, some go fully vertical, others to just something like 60 degrees while the angular velocity is maintained. While the force on your body varies (as it’s the sum of the reaction to the centripetal force and gravity, and gravity having a constant direction) the force is always greater than gravity, hence you don’t fall while at the top.

After a while the thing returns to the horizontal and slows, you then get out, fall over, throw up and go for a kebab which will also see you robbed blind, falling over and throwing up.

Using what we have seen we can work out how fast the drum needs to spin to counter gravity, assume we are going to elevate to the fully vertical, we thus know the acceleration due to gravity is 9.81ms-2 vertically downwards, thus at the top of the rotation we need to counter this, and indeed exceed it.

Assuming the drum is say 15m in diameter, how fast does it need to spin to counter gravity?

However that’s to negate acceleration due to gravity at the top, in practice you want to at least have “1G” at the top, giving “2G” at the bottom for safety. This means the time for one rotation of a 7.5m radius we have a complete rotation in 29.14 seconds, which will see the occupants pinned to the top but not overly crushed at the bottom.

Note astronauts (and spies pretending to be astronauts) are trained in something very similar, though remaining horizontal to train and test their endurance to accelerations they will encounter during rocket launches. These devices can exert a considerably higher centripetal acceleration to allow the astronaut to be tortured trained to 6G or more.

Right, so this shows that spinning bodies can overcome the force of gravity, so back to the spinning earth, if you stand at the equator this is similar to being on the outside of the wheel as it rotates, so why are you not thrown off?

Well, lets find out the centripetal acceleration standing at the equator.

The radius of the earth is 6,371,000m (the mean distance, the equator is slightly larger, we will come back to this shortly). And rotates in 24 hours. Again using ac = v2/r we know the radius, and thus the circumference so we can work out the acceleration thus:

This is still more than enough to stop you being flung off.

Note the earths gravitational field is not constant (because the mass distribution varies) and because of that centripetal force the earth bulges slightly at the equator which negates much of the difference. Because of this the variation in centripetal acceleration due to gravity which varies with latitude is generally ignored, even in practical experiments needing a fair bit of accuracy, its easier to determine the net acceleration and use that.

Thus to answer our initial questions:

Q: “if the earth is spinning why are you not thrown off at the equator by centrifugal force?”

Comment: if the force due to rotation was large enough to throw you off, it would likely see the earth itself ripped apart.

Q:”why don’t you weigh less at the equator than at the poles?”

A: you do, just not by enough to notice or care about.

Note there are a few other observations from all this.

The tides experience by the water on the earths surface is caused by the gravitational attraction of the moon dragging the sea around, we get a tidal bulge towards the moon (not directly towards though, as the water has mass, and thus moment of inertia and as such lags the moon somewhat). We get a bulge on the opposite side due to the effects of inertia.

Note tides are slightly higher at the equator than the poles due to the centripetal effects noted above – this is masked by the way the oceans move and the shape of the coastlines.

The speed a satellite moves at is determined by the radius of its orbit, higher orbits move more slowly, eventually you get to the point you complete one orbit in the same period as the earths rotation, “geostationary” orbit., as you get lower you move faster to maintain the orbit as you require more centripetal acceleration to increase the “curve” of the orbit, get too low and you enter the region where atmospheric drag takes over though.

Note the gravitational influence of the moon and indeed, sun and other planets also have an effect on the satellites orbit, though small these combine to change the orbit over time and require adjustments to be made (players of Kerbal Space Program are spared this “n” body physics thankfully)

As with satellites there is a speed you need to obtain to orbit the earth, which varies depending on how high you are going, rockets typically aim for a low orbit, the satellite then raises this itself later. This is (roughly) 7,800,000ms-1, this is also typically why rockets are launched at the equator in the direction of the earths rotation, in effect you get the speed of the earths rotation at the equator (463ms-1) for “free”, and going the other way means countering this rotation before you can actually go the other way, adding about 926.6ms-1 to the change in velocity the rocket must be capable of.

For now this concludes the basics, open to suggestions on further questions, a lot of this can, with a bit of effort, be confirmed experimentally to various levels of accuracy. The key though is how its all inter-related.

Specifically this means anyone stating “there is no such thing as gravity” needs to explain how all the observed effects occur if their statement is true, and anyone answering “god does it” frankly isn’t worth listening to – stating a god came up with it all and created a universe so it all works is far more interesting as a statement, but then they still need to explain how it works if they remove gravity.

By the same token “the earth is flat and not round” means there are then a lot of other implications that need answering, from “how come the moon doesn’t get a lot closer at the edge than the centre?” to “how do we stand upright with gravity acting towards the centre of mass?” and a whole slew of other points.

I hope you have if not enjoyed this series at least had painful flashbacks to the lessons in school when you were far more interested in the pupil of same/different gender sat in front of you than what the old fool standing at the front was saying..

The physics of the universe is amazing, and in general terms not that hard to understand, but gods there are some rabbit holes to vanish down when you get into the details.

You spin me right round baby…

Musings on objects and motion, part one, the basics Recently a comment, that nobody read, was posted by one of our more trollish contributors trying to toll people about the world not be round or [more…]

It isn’t my fault, honest, you may recall a certain nameless puffin of this parish who has a thing for shunting and the associated models who some time ago started to make a small model [more…]