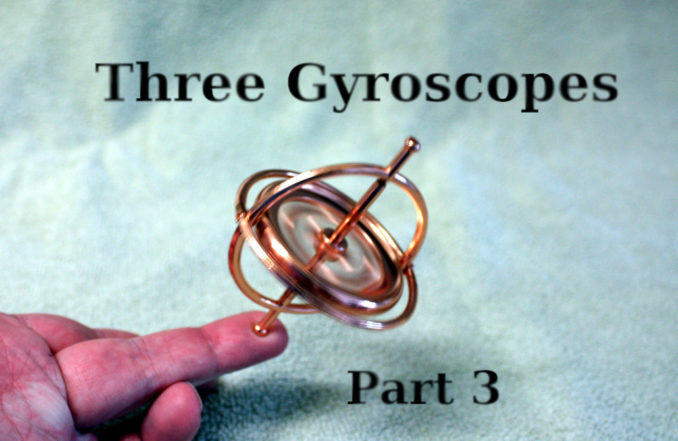 In part one we looked at how a gyroscope seems to defy gravity. This is accomplished by angular momentum. We’ll come back to that later 🙂

In part two we looked at how a pendulum can demonstrate the rotation of the Earth. Not only that but also that it is a sphere. This is called (after its inventor’s name) a Foucault’s pendulum. A quick recap.

The above photo is double exposed to show a complete cycle of the pendulum (aspect ratio is rubbish!). Left side image (A) shows the pointer (P) tracing the horizontal line. If the earth is not rotating it will continue to trace that line until friction gets the better of it.

The dashed blue line is my calculated path that the pointer should trace after half an hour – if the earth is rotating.

The right side image (B) shows the pendulum’s motion after twenty minutes. It appears that it has changed direction and it’s now trying to follow the blue line. In fact, what has happened is that the earth has rotated taking myself, the paper and camera with it. The pendulum has obeyed (and demonstrated) Newton’s first law of motion: A body at rest or moving in a straight line will continue to do so unless an external force is applied to it. In other words, it’s the inertia of the pendulum’s mass that keeps it moving in a straight line, while the earth (and everything upon it) rotates toward the east.

Foucault And The Gyroscope

In 1852, just one year after he did his pendulum experiment, Foucault had the clever idea of using a gyroscope to measure the earth’s rotation. Just as the pendulum has inertia a gyroscope has gyroscopic inertia or a rigidity in space. Basically, it does not want to move or change direction. The faster and heavier the flywheel the more rigid in space it becomes.

In the above photo I’ve built a free gyroscope. It’s got a lot going on but note the little laser pointer (our own El C. knows all about them!). This simulates a distant star. First, let’s look at how it’s constructed.

This is why it’s called a ‘free three axis gyroscope’. In fact it’s the working principle behind an aircraft’s auto pilot. Now, let’s have a little think as to how this device works with respect to a rotating earth.

In fig.4, the big circle is (obviously) the earth rotating around its north and south poles. (P) is the polar star, Polaris and (S) is just some distant star. The earth is rotating in direction (R), from west to east. (A), (B) and (C) are free gyroscopes. Note that the axis’s of (A) and (B) are perpendicular to the earth’s axis and that (C) is parallel. (W) are the flywheels and we’ll assume that they are spinning – fast!

(L) is the gyroscope’s angular momentum. I wrote about that in part one. The faster the flywheel spins the stronger the “force” of (L). It’s a conserved force i.e. the gyroscope will always try to point along the line of its axis of rotation. There’s that gyroscopic inertia.

With this knowledge let’s analyse the different positions of our free gyroscope on the earth’s surface.

Say we take fig.4 (C) gyroscope and place it at one of the poles. Its axis of rotation is parallel to the earth’s axis and, therefore, its angular momentum is vertical. As the earth rotates it always points to the polar star.

Now, let’s take fig.4 (B) gyroscope which is placed at the equator. Its axis of rotation is horizontal and points directly at the earth’s axis. As this will be conserved as the planet rotates, there will be no drift.

Think, that as the earth rotates the gyroscope maintains its orientation relative to some distant star. We (and other static objects) don’t. To try and get your mind around this screw up look at the figure below:

Looking at fig.5, the earth is turned on its side. Imagine standing with the gyroscope at point (A). The gyroscope’s axis of rotation looks vertical. Of course, to someone at the poles it looks horizontal!

We know that on the equator there will be no drift. But, from fig.5 you can now easily see that there will be tilt – the gyroscope will appear to move up and down as the earth rotates. Simple.

Finally, looking at fig.4 (A). Our free gyroscope is placed at the north pole. The axis of rotation is pointing towards a distant star (S). Angular momentum keeps the axis pointing towards the star. As the earth rotates counter clockwise the free gyroscope appears to drift clockwise. Again, it’s not moving, we are! There would be little or no tilt. As we all travel about fifteen degrees per hour to the east, these two simple mathematical expressions show how it works:

The azimuth is simply the relative angle of rotation around the equator. For example: if we start at midnight (let’s say, zero degrees azimuth), then at 6 AM we will be at 90 degrees azimuth. After six hours we therefore have: 15*6 = 90 degrees tilt, which matches fig.5.

Examples From The Lab Walls

The two photos below are plots from my ‘laser’ free gyroscope shown above. I attached paper to my lab walls (with electrical tape!) and plotted the apparent movement of the laser. I say apparent because it is not moving we are.

You can clearly see the drift and tilt. The plots were taken over several days at about the same time of day. I’ve left the “errors” in – all good scientists should. You can make up your own minds. The earth is rotating in the direction indicated. The time run for each plot was about thirty to forty minutes. The black spot marks the start of the laser dot.

Phew! I don’t know about you but that’s hard to think about. As the rate of change of the earth’s rotation is practically zero (we’d know about it if it wasn’t!) it’s quite remarkable that the great minds of the past found a way to measure it.

Sure, we can place a stick in the ground and watch the sun’s shadow apparently move. But, are we moving or is the sun moving?

Newton’s first law of motion and Foucault’s pendulum/free gyroscope (and some fairly simple mathematics) show that the earth is not only rotating but it is indeed a sphere. Geniuses.

In the final part we’ll look at a bit of gyroscopic fun – but nonetheless brilliant.

Melting a hole through steel: The above image needs a little explanation! The Doc messed up his camera settings and under exposed the image. So I loaded it into Gimp and played with the curves [more…]