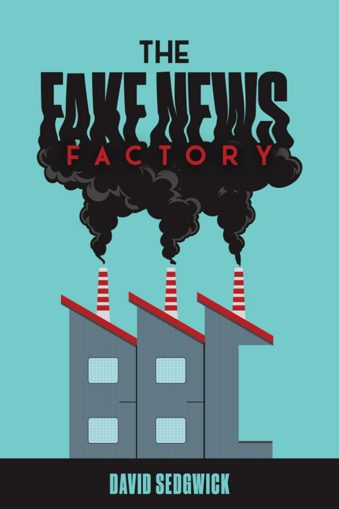 When I heard through a third-party that the BBC was planning, and I quote, ‘to sink’ my new book about them I wasn’t that surprised. After all, the theme of ‘The Fake News Factory: Tales from BBC-land,’ is BBC dishonesty. Indeed, it made perfect sense. Although friends scoffed at the idea, I have since discovered that this was no idle threat.

It had all started in December. After six months I finally received the BBC’s definitive reply to a complaint raised in June. Stuffed full of falsehoods and spin, the reply from the organisation’s grandly sounding Executive Complaints Unit (ECU) was music to my ears – the basis for a chapter in the book entitled ‘Liar, Liar pants on Fire: Anatomy of a BBC Complaint.’ The sly broadcaster had fallen right into my trap. Lie had followed hard upon lie. I now looked forward to chronicling Auntie’s deceit in very gory detail in this chapter.

Being an ethical chap (I like to think) it seemed only fair to inform the BBC that the complaint would have a starring role in my forthcoming book. Would they care to modify their dishonest reply in the light of this fact? While the BBC had never offered Sir Cliff Richard or Lord McAlpine the chance to refute its smears about them, the principled course of action should always be to provide an opportunity to respond to accusations. Big mistake. As it would transpire, in offering the corporation a chance to choose honesty over dishonesty I had also tipped them off about the book’s imminent publication. They could now plan how best to ‘sink’ it.

Here’s just one trick that has been used to achieve this aim. Having published the book on Friday 31st January via Amazon, I immediately ordered a batch of author copies to be sent out for review purposes. As authors know only too well, however wonderful a book is, it will not sell without the publicity generated from reviews. The week of publication is the time when interest is highest in a book. Besides, I had given assurances.

By Sunday evening however just one review copy had been despatched. What about the others? I was especially anxious for copies to reach publications like the Spectator and the Sun. What had happened to the other copies? Time to call Amazon. ‘The company stopped publishing,’ explained a female Amazon representative in the Philippines. “Stopped” in the middle of publishing my copies? Apparently so…. After printing one copy, Amazon’s printers had “stopped” – just like that.

‘You could cancel the order and start again,’ she helpfully suggested. I gritted my teeth. I had promised the reviewers they would receive copies this week with follow-ups/interviews perhaps to follow the week after. There was nothing else to do. I re-ordered and added a copy to be sent to my address – a control. I was getting suspicious. Had I not called Customer Services, who knows how long it would have taken to discover that Amazon’s printers had suddenly and inexplicably “stopped” and that the order had thus effectively been cancelled.

Two days later on Tuesday 2nd February, I checked my Amazon account. Déjà vu. One copy had been despatched, the others had not. The despatched copy was the one earmarked for myself . . . It seems that Amazon were not too keen to get my review copies sent out. Hmm . . . Another late night call to an anonymous Amazon voice somewhere in Asia followed:

‘Sir, I do not know why just one of your books has been published. Let me check.’ By now the routine was becoming familiar: Check Amazon account: see that my review copies have still not been despatched; call Amazon; receive a garbled explanation; check Amazon account next day; back to GO.

This time we seemed to have found the answer: ‘I know exactly why your own book has been despatched ahead of time,’ said the voice with a whiff of triumphalism. ‘You paid for expedited postage.’

‘No I didn’t! I never pay expedited shipping. Anyway, why would I pay extra to have a book shipped to myself? It’s the review copies that need urgent delivery.’

It was no use arguing. He was right. The Amazon invoice for my personal copy clearly included the cost of expedited shipping. How odd. I had no recollection at all of choosing this expensive (£6.50) option. Why would I do this? I was in no hurry to receive a copy. As the author I’ve read the text hundreds of times . . .

I went to bed confused. This was the second time Amazon had not fulfilled my order in the space of days. Who knew when the review copies would be despatched? One thing I did know was that time was against me. On the week of the book’s release I had obtained a grand total of zero reviews. If the BBC had decided to ‘sink’ the book, it was a plan that was working perfectly. Sales figures were very sluggish – well below what I might expect.

Going through my emails I chanced upon the Amazon confirmation for my order of Tuesday 2nd February. And there it was. I had NOT added expedited shipping to the order for my personal copy after all. It was there in black and white: standard shipping – like the other five books. Wow! Not only had Amazon told a bare faced lie, someone in that company had altered the original credit card payment – increasing it to make it appear that I had indeed opted for enhanced shipping !

The conspiracy theory had suddenly become real: Amazon was indeed going to quite extraordinary lengths to delay despatch of my review copies – no doubt at the behest of the ‘British’ Broadcasting Corporation – part of a plan to ‘sink’ my little homage to the corporation.

My next call to Amazon had an altogether less friendly feel to it. The Supervisor I spoke to did not even flinch at the mention of the word fraud: ‘If you think there is a problem, take it to the small claims court.’ I couldn’t quite believe my ears. Amazon had perpetrated a fraudulent transaction on my credit card and seemed wholly unconcerned.

‘This is a serious matter,’ said I shaking with rage, ‘Amazon has committed credit card fraud. That’s illegal!’

‘THINK? You have the evidence! It’s in front of your eyes!’ My indifferent supervisor did indeed have two invoices displaying separate amounts. An Amazon employee(s) had committed fraud on my account. The fact that only a few pounds were involved was beside the point of course. Did he not think the matter needed urgent action?

‘Is there anything else I can help you with today?’

I was gobsmacked. What else could I say? Amazon have managed to ensure that my review copies have still not been despatched. Oh, no doubt they’ll get to their destinations, eventually, after the horse has bolted. As for now, apart from friends and colleagues hardly anybody knows about the existence of a book the contents of which will shock all but the most steadfast of BBC apologists.

So, Auntie has her revenge. The corporation has pretty much succeeded in doing what it had set out to do: sink ‘The Fake News Factory’ – my book which exposes the broadcaster’s unethical behaviour. Irony of ironies. Well, what did I expect?

Be careful what you wish for

There is a certain segment of society that is sufficiently deficient in self-awareness, social conscience, understanding, and indeed wisdom, that they are incapable of any ethical or moral position other than that which is floated [more…]

Zuckerberg is coming to town

Monday the 31st May Sunday the 13th June 2021 sees the much-anticipated launch of Britains’ newest news channel, Andrew Neil’s GB News. With its Union Jack based logo and a hint of the words “Great” [more…]