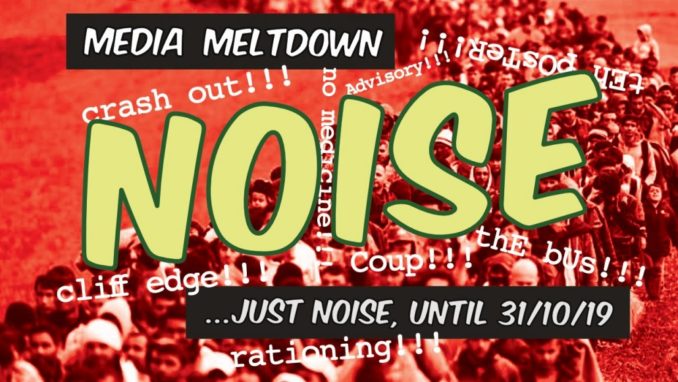 The hacks and TV heads are currently having a collective meltdown. The 31st of October is less than two months away and the remaining Remainers who George Galloway likened to “a collapsing soufflé” are making a lot of noise. Hyperbolic noise. On steroids. The news hounds, the hacktivists, the propagandists and the assorted EU funded hanger-oners have turned up the noise. Head of the lipstick and greasepaint rolling news wankerati and ‘visage de jour’ on SKY News politics is Beth Rigby, a cerebral toddler who has somehow found herself in the deep end of our United Kingdom’s failing Idiocracy.  “…“A Tory minister texts: “They’ve all gone nuts”. This is going to be a mind-bending week which could destroy the Tory party, this govt & test our political & constitutional coventions (sic) to breaking point. It could even end in a GE being called. Strap in and stay tuned to @ skynews“, she tweets, lining up her narrative for the coming week. Yawn. I think I’ll give that a miss Beth, thanks all the same.

Meanwhile, out in the country and outside of the less than 1% psychological bubble that is the UK news media cycle, people are getting up, going to work, feeding their kids, shopping or saving for next year’s holiday, tidying the garden, watching the soaps and generally not thinking about politics at all. Mention Brexit to them and you’re unlikely to get a well-tempered response if you get any interest whatsoever. People are fed up of ‘Brexit’ and ‘Politics’ and want the damn potholes fixed and the traffic jams to go away.

Until the 31st of October, political commentary on UK mainstream and social media is virtually all noise and the usual suspects will be creating lots of it. Divide and rule is what they do and the noise is there to divide.

The odd clear signal or two can however be detected in the noise without too much difficulty:

Bluster, buffoonery, betrayal and breath-taking contempt for the voting, hardworking, taxpaying average Joe will be the signature of the coming news cycle output on the BBC, C4, SKY and every half hour on every radio station in the country. It has been the signature of news cycle output for so, so long and people are fed up and angry. The usual suspects will weld their talking points, their fearful notions and their doom-mongery into the minds of the listening public. It’s all noise.

Come the 31st of October we will be in a position to judge whether Boris Johnson, First Lord of the Treasury, is a man of his word. His predecessors were unafraid of the unabashed lie, but we are each different, each free to be honest and it is unfair to prejudge Boris Johnson based on the words and actions of others. The noise will come to a conclusion and the future of our nation will be set on a new course.  Whatever course we take, I suspect it is going to be rather turbulent.

‘This Sovereign Isle’, or ‘Britain in and out of Europe’ by Robert Tombs was published by Allen Lane on 28th January 2021. I got my copy from Blackwells at a slight discount to the £16.99 RRP [more…]

Ed. While I doubt many of us believe Boris Johnson’s in charge of much of anything (He’s even devolved ‘Green’ policy to Carrie Symonds for a quiet life), he’s the one at the top and [more…]

Separating the Wheat from the Chaff

Had I been the Starship Enterprise on Monday 3rd June 2019, Scotty would have said “…she can nae take n’more Captain!”. As it happens, warp factor 10 was not attained and the engines were switched [more…]