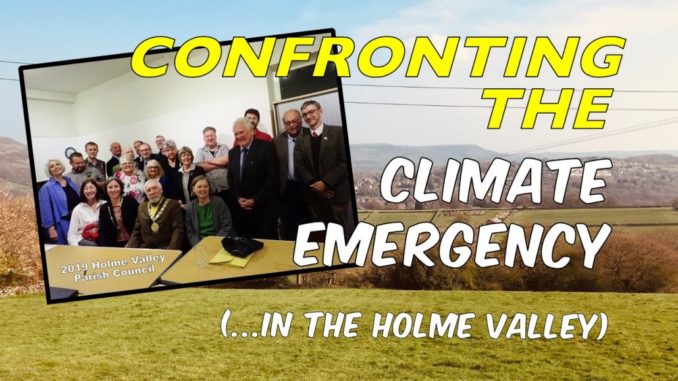 Interesting facts: On researching the relative merits of solar power and nuclear power with respect to waste and toxins released into the environment, I was surprised to read that solar power results in 300 times more waste than nuclear power per MWh of electrical energy generated, according to one research analyst who has reviewed the data [g].

Energy  and Transport together account for nearly 50% of the UK’s CO2 production(ref [h], p8). The energy sector contributes approximately 23% of the overall greenhouse gas emissions [GHGE] in the UK. The HVPCCESG received an excellent presentation from one of the members on energy production and what influence the HVPCCESG and the people of the Holme Valley can have in their day to day lives in reducing this impact.

A most interesting discussion followed. Locally, especially in respect of new build properties, energy efficiency and energy self sufficient properties were discussed. Reducing need and consumption reduces required supply/demand from the energy sector and hence reduces GHGE. Members of the committee found common ground in this. Other aspects of energy efficiency with respect to the current housing stock were discussed. As many residents will recall, there was a program of loft and wall insulation throughout the country approximately 15 years ago. Many homes in the Holme Valley will have improved their home insulation at that time. However, with rising costs of gas and electricity, simple advice and modifications such as window seals, door seals, draft excluders and simple low cost effective details can have a huge impact on energy use and fuel bills. This not only reduces CO2 production, but importantly saves money.

Also during the discussion, the meeting noted that the comparative proportion of GHGE from the Energy sector was much smaller in France. This is due to the French using much more nuclear power. Once operational, nuclear power plants do not produce CO2 as a product of the nuclear fission process. With respect to tackling CO2, nuclear fits the bill better than any other electricity source, though there are widespread concerns about the safety of nuclear power and its byproducts. Perhaps the HVPCCESG should lobby for more domestic Research and Development into new next generation safe nuclear power which could provide the long term solution to the ‘clean energy’ problem – though nuclear energy is beyond the remit of the HVPCCESG.

The idea was suggested to identify an ‘Eco Home’ being built locally and see if we in the HVPCCESG  can share the experiences of building a modern energy efficient house today in the Holme Valley with residents and especially our young residents some of whom will be the ‘Eco Home’ builders of tomorrow.

The hacks and TV heads are currently having a collective meltdown. The 31st of October is less than two months away and the remaining Remainers who George Galloway likened to “a collapsing soufflé” are making [more…]

How They Rule Ya

The only way to ‘Change Politics for Good’, is to acknowledge the magnitude of the problem and understand how easy it is to resolve. There are only two things you need – co-ordination and tens [more…]

It is six months since the Climate Emergency was declared in the Holme Valley and the variation in temperature I have experienced in this time has been wide – in excess of a 30oC range. [more…]