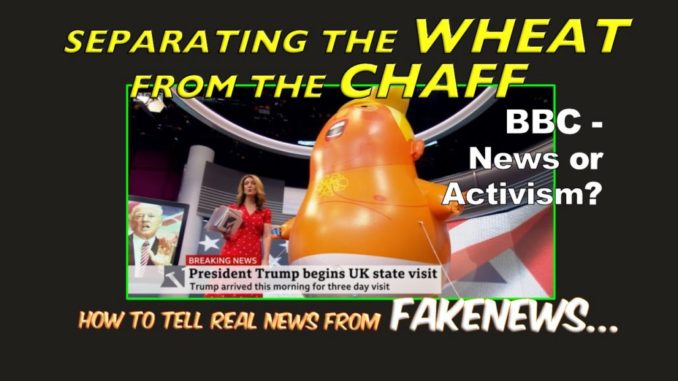 Had I been the Starship Enterprise on Monday 3rd June 2019, Scotty would have said “…she can nae take n’more Captain!”. As it happens, warp factor 10 was not attained and the engines were switched off before they blew. But I was not the Starship Enterprise. I was boldly going where plenty have gone before: to listen to the BBC coverage of the State Visit of US President.  For my own mood’s sake, I didn’t indulge for long. Off switch!

The BBC editorial choices during the state visit were bizarre, even by BBC standards. From the choice of Simon Schama, the well-known vitriolic Trump hater to provide negative narrative, to the replica blow up trump effigy in the BBC studio, listeners and viewers have been fed presumptuous and often pompous badmouthing of the President by a smorgasbord of likeminded co-hosts, comfortable in their chummy contempt. Bizarre impoliteness. Un-British.  Many more people are seeing that chatter on the BBC and the smears about Trump don’t add up and feel as though they’re being spun a yarn – though what yarn, and why, is not clear. As with many families in this era of the UK’s (prolonged) departure from the EU, much discourse on domestic and international happenings with Brexit and with Trump has been aired in the Dalton households. Who can escape it? During one such discussion, I was asked by a family member the following question having watched a BBC News item: “How do you know what news is real and what news is not real?” A good question. Not an easy one for anyone to answer.

So? How do you know what is real and what isn’t?

It is easy to provide a cynical answer to this question – don’t believe anything! Ultimately, this is not helpful. Always retaining a healthy dose of scepticism is helpful, but cynicism is not. Firstly, no one is infallible and anyone can be taken in by false news. I have considered what simple tips can be applied in spotting serious news amongst the propaganda. I hope the reader finds these thoughts of use, some of which I share:

Currently, Donald Trump, the anti-politician elected by the people for the people, who swore his Presidential Oath in January 2017, is proving to be having a seismic effect on world politics and the mainstream media is crumbling in the aftershocks. As predicted at the time…

“‘A Political Earthquake’, a phrase coined by Nigel Farage, the Nostradamus of our times, is about to get noticed.  Whilst campaigning to leave the EU and since that magnificent sunrise on 24th June 2016,  as well as domestic and other international politics I have followed, closely, the rise of Donald J Trump from maverick joke candidate through to President Elect.  It has been fascinating. One of the fascinations has been the actions and reactions of the Mainstream Media. Their political seismographs appear to be malfunctional. I suggest their moral compasses are also in need of recalibration which is the most disturbing aspect of this particular fascination, but I shall leave the morality (or lack thereof) in the media for another time.”

Through their coverage of Donald Trump, the mainstream media have proven over the last three years, beyond doubt, that they have no wish to separate the wheat from the chaff. Morality doesn’t come into it – it’s all about power and money. Trump and Farage are the libertarian wheat: positive, energetic, open, bright, optimistic, ‘can-do’ visionaries. The authoritarian chaff is the LibLabCon sewer of Westminster and the Washington Swamp: negative, low energy, pessimistic, subservient, closed, shadowy, compliant incompetents.

We need to change politics for good and we need a return of openness, diligence and truthfulness to journalism and public life.

Is it ever winter on the Florida Keys? The first week of December saw a relaxed Nigel Farage facing the GB News outside broadcast cameras framed by sun-soaked palm trees, bleached golden sands and the [more…]

I stayed up until 3am when it was clear the “Blue Wave” (TM) wasn’t happening. Highlight of the night for me was when the live chat on The Young Turks livestream was taken over by [more…]

PROOF – The Government is Your Enemy!

Science is the shield of the politician. “We must follow ‘the Science’”. Perhaps it is the Oxbridge Etonian standards in education of UK leadership: the politics, the philosophy and the (Keynesian) economics that allow them [more…]