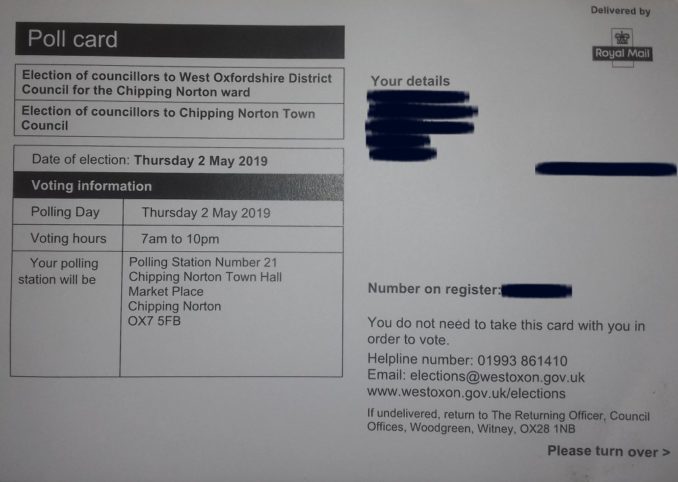 As may have been previously mentioned, I will be a polling clerk on May 23rd should the Euro elections take place. It’s my first time so I was expecting some training but no, I have been told I will be shown what to do on the day. Forewarned is forearmed so I looked around for some help. Search google for “Polling-station-handbook-LGEW” for more information. This was prepared in 2018 for local gummint elections.

Having read all 56 pages I thought I would share a few things with the puffins.

Firstly there is a load of guff about preparing the polling station, what should be placed where and so on. Then there is a bit about handling the lack of a key-holder, on other words, if you can’t get into the polling station. A few more things about the signs to be shown and where to place them.

The returning officer and his staff may visit during the course of the day. This could be for example, to deliver additional equipment, inspecting the polling station or to collect postal ballot papers that have been handed in at the polling station (Tower Hamlets anyone).

Polling agents may mark the names of the voters on their copy of the list but may not remove the list from the polling station until close of play. They may also be close enough to hear what is going on but not close enough to compromise the secrecy of the ballot.

Sealing the ballot box. This must be done by the Presiding Officer a few minutes before 7am after having shown those entitled to be present that the box is indeed empty.

The polling station must open at 7am.

Some voters are allocated anonymous entries and must produce their poll card or proxy pollard in order to vote. Some electors are allowed an anonymous entry to protect them from harm. An obvious example right now would be Tory MPs perhaps.

G and K seem to be identical but there must be some difference.

Voters queuing at 10pm are still allowed to vote but no more are allowed to join the queue.

The following people are authorised to be present at the close of voting.

At the close of the poll the slot on the ballot box must be sealed. Any Candidate , Election Agent or Polling Agent are also allowed to affix their seals to the ballot box.

The Presiding Officer then fills in the forms, generally counts of various things ,

Unused materials must be packed into their official envelopes and packets.

The election materials must then be transported to the verification and count centre.

There are many appendices after this that describe how to handle anomalies.

My ten cents worth

The ballot papers are supposed to be held securely for a year and a day, all very laudable you may think and guaranteed to ensure the ballot remains secret. A recent post said that the security bods used to check who had voted communist via noting the ballot paper number against the elector number after the votes had been securely stored. One can assume that it was not only communists who were checked, what about those deviants voting LibDum and so on.

The matching of the electoral number against the ballot paper number is supposed to be so they can check out any irregularities but who is going to believe that. Certain communities have so many irregularities you may as well check what is kosher as opposed to what is not. For my money, the ballot is anything but secret.

My major point however is that the tellers are not allowed into the the polling station. This means if you refuse to identify yourself to them, as is your right, they are not allowed to follow you in and look over your shoulder as you identify yourself to the polling clerk, it happened to me and I was not happy but at the time I was not aware it was illegal.

We have all been had

Apply-to-vote-by-post-England-Scotland-and-Wales.pdf I have done one of these before but it never hurts to remind the Puffins what a travesty it all is. There can be very few, if any, Puffins who are not aware of [more…]

The connection between the Commandos, the US Rangers and the SAS

Apart from the fact that they are all some kind of special forces, the real connection is that they were all given their names by Dudley Clarke who finished the war as a Brigadier. Who [more…]