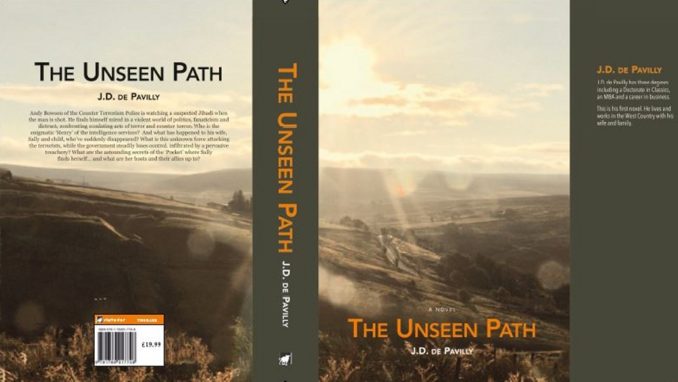 The first Going Postal serialised novel – The Unseen Path – is now published and available to purchase.  It was serialised over the course of about 11 months in 2017/18, and ran to about 180,000 words – however the very final passage was not serialised.  The readership’s response encouraged the author to try to publish it in book form.  Many thanks are due to Colonies Cross, Let England Shake and Stuart Beaker for editing, design, proofing and finding a publisher – Matador-Troubador  – a highly reputable and well established commercial publisher based in Leicestershire.  The result is a book that stands comparison in presentation terms with any published hardback and has already won favourable reviews from the book trade for its high quality.

Early book trade reviews have been complimentary, much to my surprise, given the nature of the story.

The Premise of the Story

“When Andy Bowson of the Counter Terrorism Police witnesses the shooting of a suspected Jihadi, he finds himself embroiled in a violent world of politics, fanaticism and distrust. He must work quickly to confront escalating acts of terror and counter-terror, whilst finding himself confronted with an increasing number of questions. Why has his wife Sally suddenly disappeared? Who is the enigmatic ‘Henry’ of the intelligence service? What is the unknown force attacking the terrorists, while the government steadily loses control?  The more Bowson and his team investigate, the deeper the mystery becomes. Nothing is certain anymore and he must decide who he can trust to help him discover why a war has broken out on the streets of Britain and the authorities seemingly half-hearted in their attempts to defeat it.
Meanwhile, Sally finds herself in the midst of any increasingly strange mystery. Can she ever be reunited with her husband and does she want to be? Something ancient, lost and long forgotten has decided to involve itself in the affairs of modern Britain, but why?”

Why I Wrote It

This perhaps sounds an odd question, but when you set out to write a 180,000 word story which will probably never see the light of day, something must be driving you and it wasn’t the expectation of making money.  It was written in the first half of 2016, in the run up to the EU Referendum, but the opening lines and the premise was something that had been buzzing around my head for over 25 years, and the buzzing just got louder and louder to the point at which I had to let it out to keep some sanity.

I wanted to break the rules of the conventional thriller, possessing some literary qualities, with many layers of plot and real characters in a complex twisting narrative, to write a US box set thriller of a novel, with many characters coming and going, and surprises and shocks popping up until the very end.  Everything needed an internal logic and the characters need not to be just goodies and baddies, but real people facing real choices, and for their decisions to make sense within their own lights, even those of the ostensible villains.  Even the more mysterious elements needed to be rooted in legend and seem comprehensible and almost mundane.  I want to touch on contemporary issues – Islamic terrorism, state subversion, a weak government, disillusion, but in a neutral, albeit conservative but not polemical, way.  I wanted a reader to be able to reread it many times and always find it fresh and yielding something new, conjuring a vision of something richly tactile. Most of all, I wanted to write a book that I would buy and enjoy myself, and want to read many times.

In some ways it wrote itself, it just poured out 99% complete  I never got stuck or even knew where it was going until it was 95% written.  I still cannot quite believe I wrote it.  People have said that it’s genuinely original and different.  I hope the sequel is as easy, provisionally titled ‘The Lagoon of Stars’.

Regarding the dedications: one is to Calliope, the Muse of Epic Poetry, a reference to Goodnight Vienna who became a friend and who was always encouraging to to publish it.

Without it’s serialisation on GP it would never have been published – so thanks SB.  The publishing industry is a nightmare for middle aged white straight new authors, they are simply not required unless they are a celebrity or someone’s friend.  I am none of those things.  Add in a plot which is hardly politically correct and the fact that it is twice the length of a modern novel, and I assumed it would be a hopeless undertaking to even try.  The warm response on GP, and the encouragement of many of you and the practical help of Colonies Cross, Let England Shake and Stuart Beaker gave me the confidence to try.  Matador were the first we approached and they accepted it under what is effectively a shared investment model which is the only way for new authors of my type to get anywhere, and they were happy for us to set the design direction and it looks and feels fantastic.

We decided on hardback because it is a much smaller market and easier to get noticed, along with an EReader version, and because the nature of the book merits such a high quality presentation.  The hope is that we sell out the first print run, and a load of EReader copies, and create a self sustaining demand that encourages a large international publisher to come in  for the paperback rights.  It was also written in a deliberately cinematic style so who knows? 🙂

The key to selling out the first print run is social media, i.e. GP and its inmates, many of whom have substantial social media followings and networks of their own – it’s a network strategy, selling in effect by personal recommendation. Equally important is good reviews on Amazon and the Matador site, and selling through in a sharp concentrated burst to get up the rankings and on to the recommendation prompts.  Amazon is especially critical and although we won’t break even selling through Amazon, it’s essential that many sales are taken here because of the profile it gives.  Buying through the GP Amazon link will also generate funds for GP.

GP has always been more than another blogsite.  The camaraderie, the social events, the personal off line friendships that have developed, the commonalities of world view and sense of humour, make it special.  Some of us want it to develop far more with a social and cultural as well as political campaigning platform.  Developing a publishing and sales capability should be part of that and this is our first test.  I’m not expecting to make a penny from this, it’s not what it’s about, it about a message.  Forgive me for asking, but I hope you will support us by buying a copy or two, recommending it to friends and family and on social media, posting reviews on Amazon and elsewhere etc.

Saturday the 26th of June saw another well attended, not least by Puffins, anti-lockdown Freedom March in London. As usual, the run-up to the event was embargoed by mainstream media with no advanced publicity except [more…]

He was turning into a sad old stick, but so were many of his colleagues. Working through another weekend, attacking the pile of evidence that continued to amass, following every lead, conducting hundreds of interviews, [more…]