Fisherman’s luscious lardy cake recipe reminded me of this one William posted a few years ago which some of the many newbies to GP might like to try.

Plum Bread and Butter Pudding (Not for calorie counters)

The quantities given here will fit in a dish approximately 11”x8”x2” deep. This will give 6-8 generous portions of what is an exceedingly rich pudding.

About a dozen, large juicy plums, halved and stoned 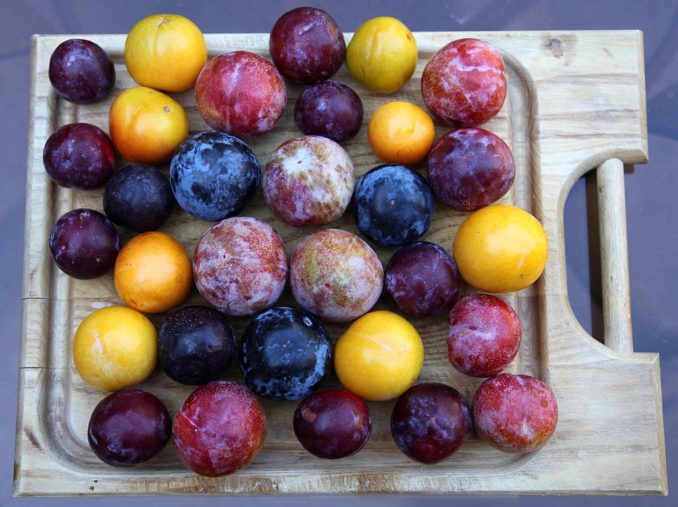 Lay the plums, cut-side up, in an oven-proof dish and place half a teaspoon of caster sugar in the centre of each one. Bake at about 200c for 20-25 minutes, until tender, and the juices have run.

The bread slices in this pudding stand upright in the dish, and not flat as in most recipes so they need to cut like ‘soldiers’, i.e. about 2” wide and long enough to fit across the dish.

So, you need about

Half a loaf of slightly stale bread, crusts removed and buttered

Now, the custard. In a pan, scald (bring almost to the boil)

And leave to stand for a few minutes.

In a large bowl, whisk together until blended

Gradually, whisking all the time, pour the cream/milk over the eggs until you have a smooth and well-blended custard.

Now you’re ready to assemble the pudding. Arrange your bread ‘soldiers’ in your greased (buttered) dish, upright, distributing the roasted plum halves between them. Fill any gaps with extra bits of buttered bread. Pour over any remaining plum juice.

Carefully pour over the custard, allowing time for it to soak into the bread. Leave the pudding for at least half an hour, topping up with the custard if necessary.

Bake in a pre-heated medium oven (170c) for 30-40 minutes until the top is golden brown and the custard is just set. Best eaten hot but still pretty good when it’s cold! 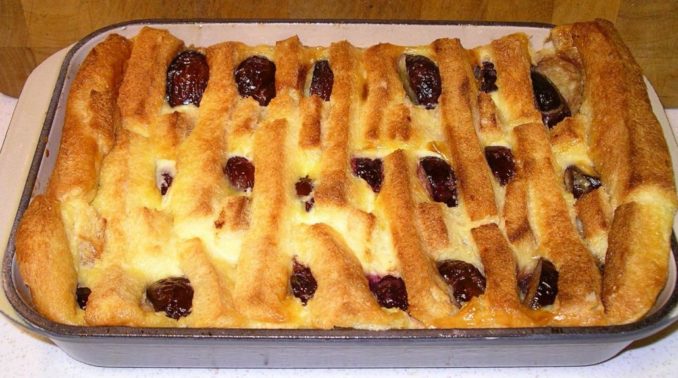 Three Men on a Bike, Part One

I suppose it must have been during the 1965 Easter break from the Sixth Form that Bogs, Cough, Pat and myself decided that during the summer months between the AS level exams and the start [more…]

After the resounding success of my fromage de tête I’ve had many, many Puffins (well, Sir Percy and AlJunior) clamouring for more.  Whilst slightly less adventurous here is my adaptation of various recipes for pork [more…]