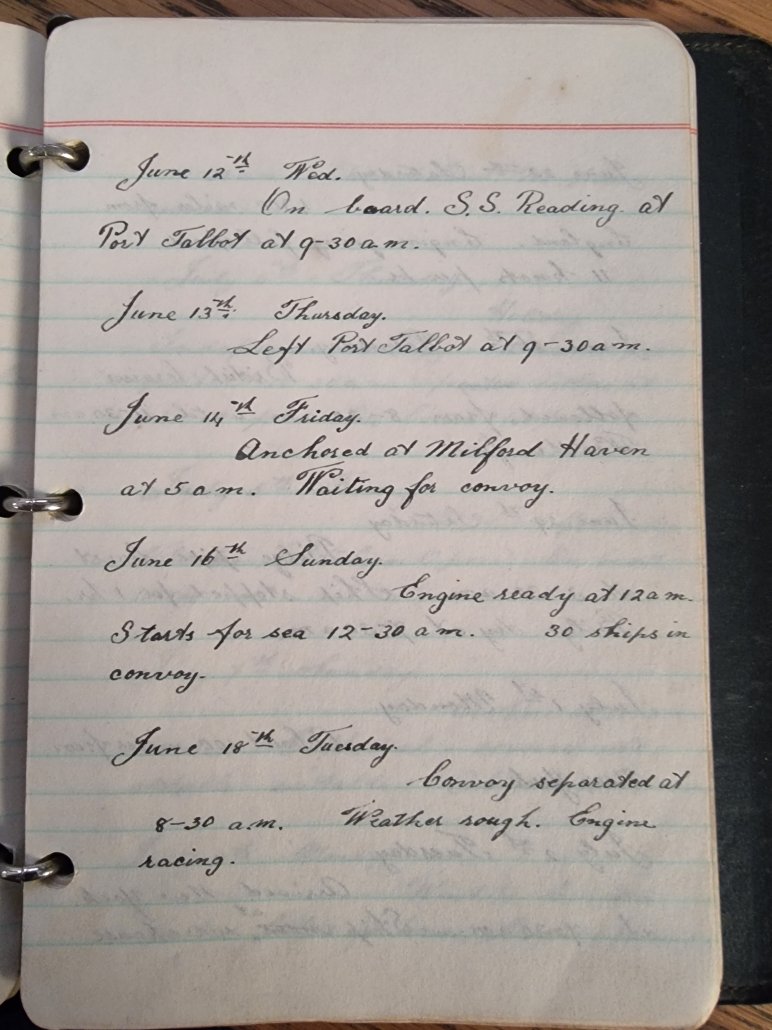 This is the brief story of my grandad and his part in the war. Here is a picture of George with who we think is his grandmother in the early 1900s. 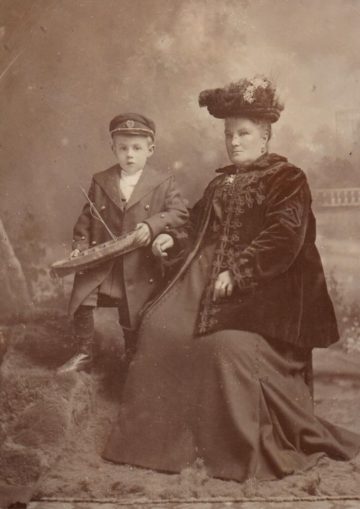 George Gilfoyle was born in Cardiff in June 1900 to Edwin Herbert and Alice (pictured below). Alice died in childbirth so George never knew his mother. Herbert went on to change from the rather dashing man in the photo to a rather fat alcoholic in later life. 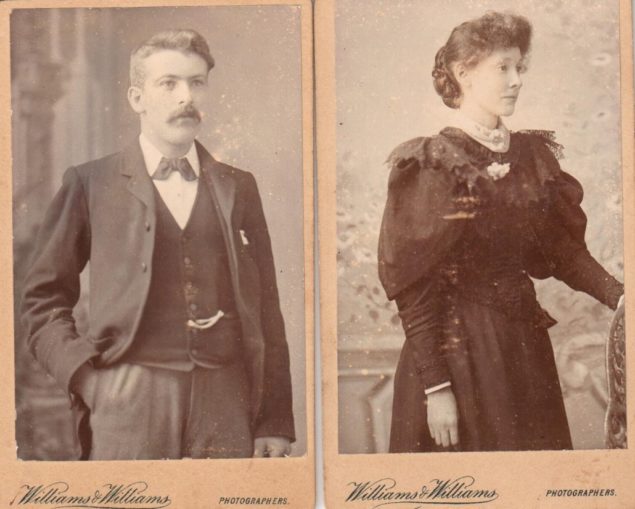 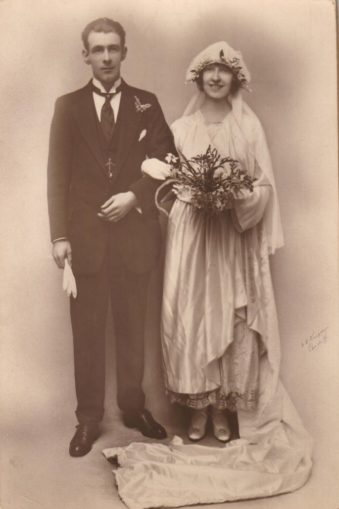 In June 1914, days after his 14th birthday he left school and started work as an apprentice fitter in the No 1 Power Station Great Western Railway in Queen Alexandria Dock in Cardiff.

In June 1918, days after his 18th birthday, he “volunteered for War” (a quote from the letter of recommendation from the Power Station we have dated 11th August 1927 – when my father would have been 7 months old) and joined the Merchant Navy as a 4th Engineer. His discharge record says he was 5ft 10inches with brown hair and brown eyes with fair complexion and no distinguishing marks.

What follows is a transcription of his diary that has been passed to my dad when he died and then on to me when my father died.

June 14th Friday. Anchored at Milford Haven at 5am. Waiting for convoy.

July 8th Monday. Went to cinema. Posted letters for home. Aboard 1am.

July 9th Tuesday. Went to cinema. Aboard 1am.

July 16th Tuesday. Arrived 7am about 1 mile from Sidney (Canada) at 7-10am. Waiting for convoy.

July 19th Friday. Started for sea at 8am. SS Reading leading ship on left wing of convoy of 30 ships.

July 31st Wednesday. About 5am. six American destroyers came to escort the convoy.

Aug 1st Thursday. Destroyers changed over. Eight British are now in the place of the Americans. At 5pm. Depth charge was dropped from destroyer. Submarine near during day and we passed four upturned lifeboats and wreckage.

Aug 3rd Saturday. Anchored outside Portsmouth at 3am. Arrived in dock at 9-30am. Discharged oil.

Aug 10th Saturday. At 3-30 German aeroplane crossed over us. At 10-30pm air raid bombs dropped on town. Gun firing for this. Raid lasted all night.

Aug 12th Monday. Arrived at Portland at 8-30am for bunkers crew not signing off. Unable to land.

Aug 14th Wednesday. Started out at 5-30am. Arrived outside of Plymouth at 4pm

Aug 18th Sunday. A ship on left of convoy rescued six men from rowing boat of the torpedoed ship “Esmic” [editor’s note, there was a torpedoed ship called the SS Escrick on 17th August 1918: https://wrecksite.eu/wreck.aspx?116109 360 miles NWxN of Finisterre by U-90 – 1 person lost] sunk on Friday Aug 16th. Weather rough.

Sept 3rd Tuesday. Went to Hippodrome (Play called “Everything”). On board 1-30am.

Sept 5th Thursday. Went to Coney Island. On board 1-30am.

Sept 7th Saturday. Went to Coney Island. On board at 3-30am.

Oct 4th Friday. Six British destroyers came at 8am. British submarine sighted on horizon at 3-30pm. About 140 miles from England.

Oct 15th Tuesday. Arrived at Portland and Weymouth at 11pm. Father came aboard from lighter at 11-30pm. Went ashore at 3-30pm. Stopped all night.

Nov 12th Tuesday. Went to cinema. On board 11pm. Wrote to Frances.

Dec 25th Wednesday. Anchored outside Barry Island at 5-30am.

His letter of recommendation from SS Reading reads:

“This is to certify that the bearer Mr George Gilfoyle has served with me as fourth engineer from June 6th 1918 until December 26th 1918.

During this time, he has been strictly sober and attentive to his duties and has kept a regular watch on engines and boilers. He is a thorough mechanic and at all times willing and I can recommend him to anyone requiring a trustworthy engineer. 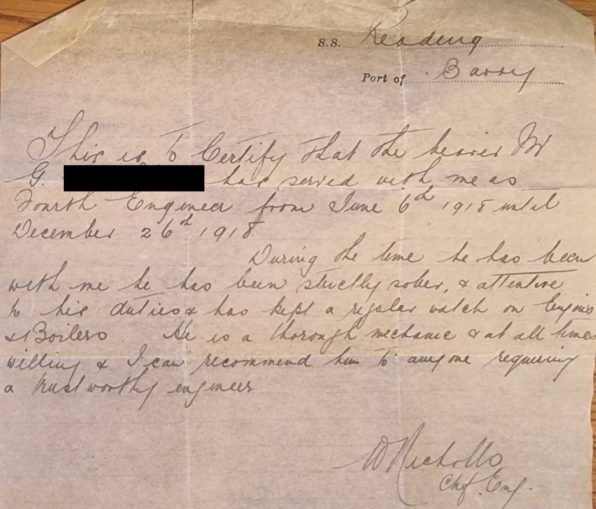 Family in later the early 30’s . Back row is Frances’ dad, Frances, Frances’ mum, George Herbert (told you he went fat alcoholic), George and my dad. 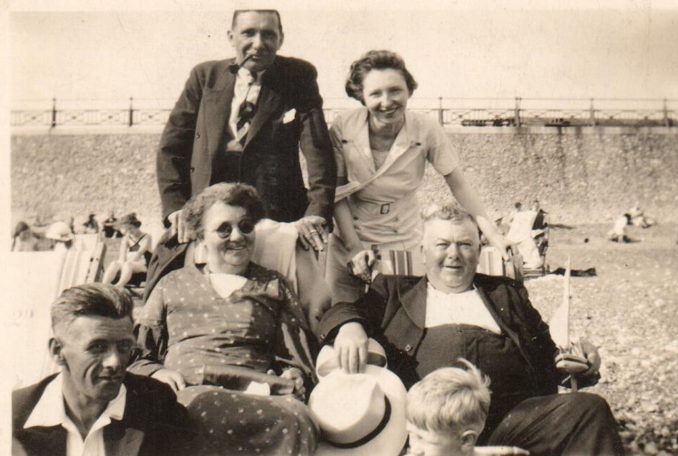 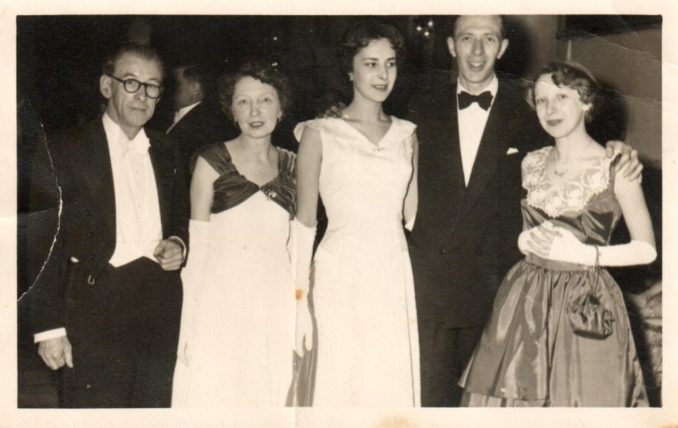 George died in April 1965 when I was 18 months old so I never got to know him. We have his probate record here and it states that his estate was valued at £5. His funeral cost £65.

I know there’s plenty of former Pusser types on GP, and even a few who have sailed under the red duster. They’ll all be familiar with the Christmas routines for their respective outfits. I thought [more…]

Dedicated to all the men & women of the British Armed Services, especially those killed in the line of duty since WW1 and the countless numbers injured and disabled defending our country and way of [more…]

Still Not The Right Way To Put Out A Fire

You may remember some months back I related a story of my first fire exercise sailing under the Red Duster. I was somewhat unimpressed having come from a different seafaring outfit where these things were [more…]