Last time on Mystery Album we decided Helsinki Central Station showed the world a particular kind of Art Deco that stamped on some of the movement’s expectations. Purists half agree, preferring it transitionary from Art Nouveau. The actual term ‘Art Deco’ wasn’t coined until the Exposition Internationale Des Arts Décoratifs et Industriels Modernes in Paris in 1925 but had to already exist as a movement for a name to be attributed to it. With Central being officially opened in 1919 and our mystery family visiting after 1925, exciting times were captured by their shutter. 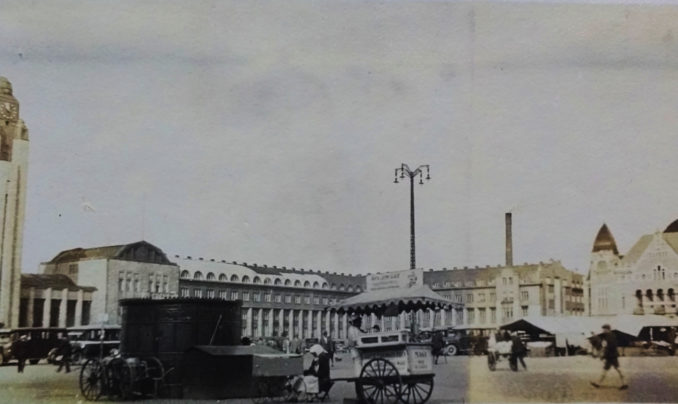 One Art Deco embellishment is the tower on the eastern side of the station which partially appears to the left of the above photograph. Brainy people use the label ‘Late-Jugend’, a unique Finnish nationalist romanticism characterised by the liberal use of impressive local granite blocks. One might call it Early-Minecraft. No matter what the label, it looks ‘spot on’.

To its right, a long building of columns and windows runs to the far end of Rautatientoriand Square. These are railway offices, the railway in question being VR which stands for Valtion Rautatiet or State Railways.

At the far side of the square, to the left, sits the Scandic Grand Central Hotel. This has recently (2017-2021) been re-built with great sensitivity shown towards the original building. Ceiling heights have been kept at 14ft making accommodation much more spacious than the battery hen experience travellers now expect. Extra rooms have been added by extending a rotunda from the northern side of the building into its internal courtyard.

Back in our photograph, before the railway buildings, a collection of charabancs can be seen. In the modern day you can stand in the same spot courtesy of Street View with the clock tower of the station under reconstruction and covered in clock tower coloured hoarding.

That side of the square is still one of Helsinki’s main bus halts and is covered in tarmac. But the right-hand side remains cobbled and is used to host events, often involving temporary marquess, with the approach of winter bringing an open-air ice rink.

As we continue our clockwise tour, next to the Scandic Grand sits a pitched roofed building which is the Finnish National Theatre. Also counted as being of the National Romantic style, in the modern-day a statue of Aleksis Kivi sits outside. Kivi is the author accredited with the first significant book penned in the Finnish language. His groundbreaking work, Seitsemän veljestä or Seven Brothers, was published as recently as 1870. As the sculpture wasn’t erected until the decade after the visit of our posh mystery family we shall move on.

A weakness of the Mystery Album is an absence of the mundane. Understandably, rather than the ordinary, public buildings and famous things caught the camera lens. However, the mundane can be of more interest a century later as it is less likely to have been preserved. Thankfully in Rautatientoriand, there is period detail to catch the eye. Note the tall street light, market stalls and hand carts. As with previous episode’s locomotives, wherries and windmills, such things are all the same but, upon closer inspection, all different according to their function. So it is with Rautatientoriand’s late 1920s hand carts. 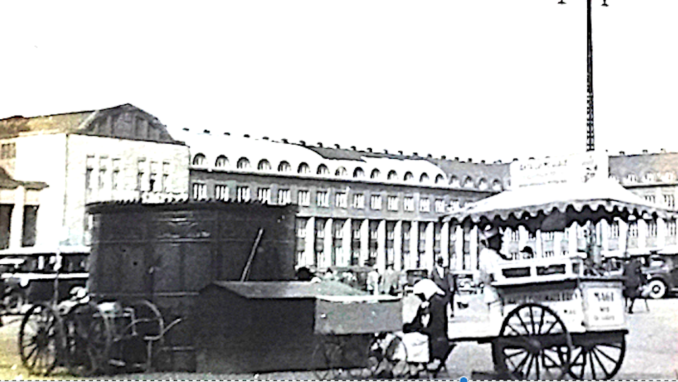 Aficionados will tell you, at one end of the scale carts start as old tea chests on redundant pram wheels and build from there towards something more sophisticated. If we examine the light coloured cart to the right, table legs mean it can be kept level. A display case is attached to one side and a canopy above keeps the heat of the sun away. Strikingly decorated, display must have been an important part of its function, perhaps to invite a discretionary purchase from a passer-by? Maybe the vendor was offering bakeries or ice cream? To the left, stands a purely functional cart, a plain, thin, undecorated box with spindly wheels.

There’s another handcart further left with no attempt at ornamentation and consisting of two silver urns. Two sets of wheels suggest it was heavy. If filled with something to dispense to the public, you would expect the urns to be raised. Sitting so close to the ground makes it a bit of a puzzle. Fire extinguisher carts or water for cleaning? Perhaps there’s a Puffin out there who knows about such things?

As for the structure behind them, it appears rounded, ornate and made of shaped panels. Is that a door and a lock? Does the roof consist of a flat corrugated sheet or possibly a grill? My first thought was of a public lavatory. A not too comprehensive internet search of old photos of Helsinki streets revealed no similar structure but in the modern-day the city’s public lavatories do have a tin box feel about them, albeit with a much more utilitarian finish.

Perhaps it was something to do with the hand carts? It doesn’t look big enough to take an entire one but maybe non-perishables could be kept there overnight? We shall label it a ‘utility area’ which can usefully mean anything. As for attributing the street scene to a cultural style, how about Cart Nouveau? Sorry.

Helsinki Central Railway Station replaced an earlier building outgrown by the expansion of the railways.

As the new station was built around it, the old remained in place and was demolished as Central was completed. Remaining in place for decades longer, were the freight yards to the west of the passenger platforms in an area called Töölö where a curved fan of lines led to loading and unloading bays and goods sheds.

As wagonload freight changed to road transport and from mixed goods to ‘block’ freight trains (each containing a single type of freight), new yards, engine sheds and carriage sidings were built north of Helsinki at Veturitie. Töölö became derelict. Subsequently flattened, it was replaced by a series of monstrosities and much empty wasted space. A crime exacerbated by its proximity to the Finnish Parliament building, from the roof of which the above photo of Töölö was taken.

Wouldn’t it have been better to have kept the existing roofline and curves and replaced the derelict buildings with a low rise subdivision of housing and small and medium-sized business premises close to parliament and the city centre?

One yearns for the mundane.

Early in the morning of Friday 2nd July 2021, the world of politics was shaken to its foundations by a count declaration in Huddersfield’s Cathedral House. The returning officer for the Batley and Spen by-election [more…]