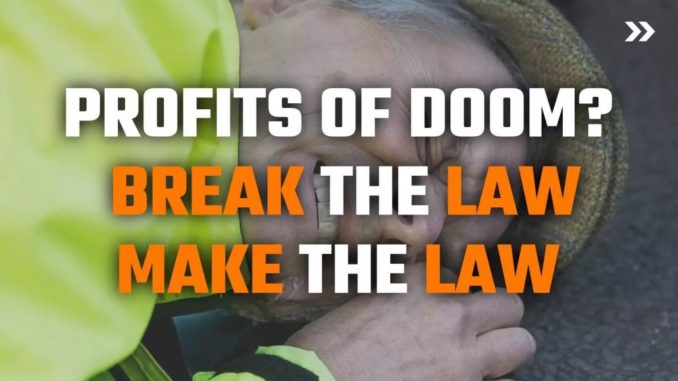 Whilst the public are affixed to the distractions of COVID politics, climate politics, Alec Baldwin, the ‘Far Right’ and structural racism, Extremist Rebellion cling like ivy to their focus –  implementing public policy in the UK right now – with a bit of ‘gluing your face to a road and obstructing the public highway’ on the side – and pushing though deceitful referendums.

Meet Matthew Tulley (picture). Matthew glued his face to a road in the fight against a Climate Emergency on Monday 25th October and was arrested, as reported in the Telegraph, the Express and the Mail. Yes, Matthew made the national newspapers – job done. I’ve met Matthew. I shared time on our local Parish Council Climate Emergency Committee with him. He is a believer in the cult of climate doom and his businesses are set up to tap into the inevitable ‘War on Carbon’. He’s an XR supporter and an ‘Insulate Britain’ supporter, both organisations committed to continue conspiring to break the Law to enforce their political agenda.

My inclusion on the Climate Emergency Committee was terminated – I was de-bonded from it against my will. My thinking is ‘wrong’. That is to say, my questions and the facts I share are inconvenient – I have a good understanding of ‘climate science’ and am a professional in a related field. I am also an elected representative of parishioners. I like to stick to the facts and adhere to an honest pursuit of truth.

Mr Tulley remains a member of the local council Climate Emergency Committee. He adheres to ‘correct’ thinking. That is to say, he makes the right assertions and has ‘good’ motives and the end of the world is nigh. He is not an elected representative of parishioners. 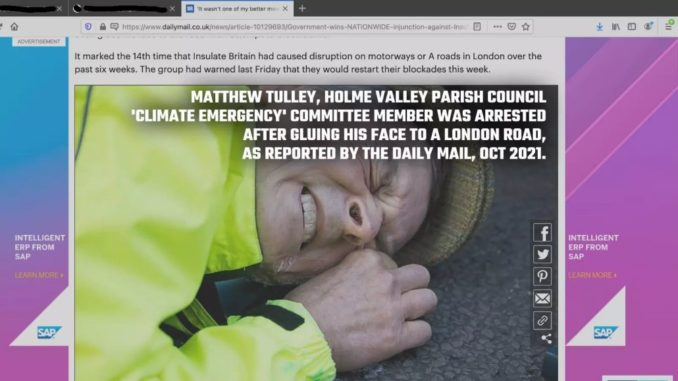 Next week the local electorate in the Holme Valley are being asked to engage in a Referendum. What is the critical political question of the day demanding the urgent response of the public? Vaccinations in schools perhaps? Medical ‘vaccine’ passports maybe? A rethink on UK Energy policy and ‘Net Zero’ perhaps? No chance.

The referendum is, allegedly, on whether local planning decisions to be made by outside bodies (Kirklees Council bureaucrats and Peak District appointees) should be based on the impenetrable documentation known as “The Holme Valley Neighbourhood Development Plan”. Mr Tulley is not untypical of the extremist, childish and foolish law breaking individuals who are not only driving road users in London crazy, but driving our public policy towards undemocratic, unscientific and ultimately impoverishing ends. This is happening in public bodies everywhere, not just our own ‘Climate Emergency Committee’ on the Holme Valley Parish Council, an institution which I am determined to see cleaned up. 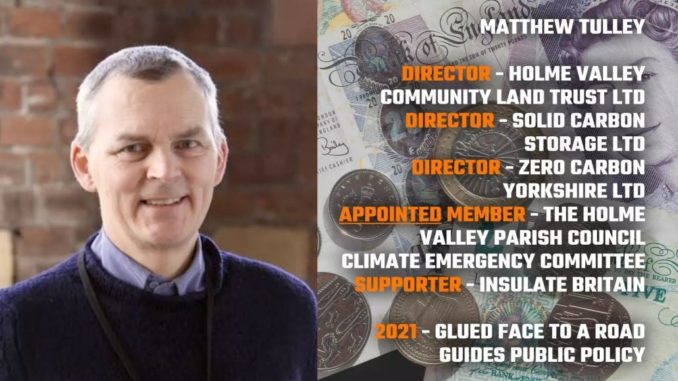 Voters may have elected me, but a destructive Common Purpose is fixed in our institutions and has no respect for democracy or the people. I have (and thereby the electorate has) been actively excluded from any involvement in the development of the local Neighbourhood Plan, in favour of extremist input from Mr Tulley and his rather tacky ilk. I’ll be voting a resounding ‘No’ in next Thursday’s Holme Valley vote.

If you think we’re no longer living in a democracy – you are not the only one!

A View From The Greenhouse; Tha..Tha…That’s All Folks!!!

It’s that time of year again, the strawberry beds offer up the odd lusciously red but sad, sour, berry. The courgettes are having a final spurt. The tomatoes, apart from the odd couple of plants [more…]

As a Direct Democracy Party representative I am delighted to welcome the State Visit of President Donald J Trump to the United Kingdom. There is no greater historical bond between two nations shaped by an [more…]

Racism – The Root of All Evil