I’ve often wondered whether there is a time in a football match that is the most likely point at which a goal might be scored.   Perhaps in the first few minutes when the goalie is still fiddling with his gloves, or when the defenders are looking forward to their half-time refreshments and take their eyes off the ball as the minutes ticked towards the 45 minute mark.   I always had a suspicion that the few minutes either side of half time were the minutes which were ripe for goal-scoring.

Over the course of the tournament, there were a total of 135 goals scored (not including any goals scored after the 90 minutes (plus stoppage time) of normal play, or any penalties scored in a shoot off).

My first analysis showed that the mean time for a goal to be scored was 52.85185 minutes with standard deviation 24.65176 minutes.     To get to this point, I had represented goals scored in any time added on at the end of the first half as being scored at the actual minute of play that they happened.  For example, a goal scored at 45+2 minutes is shown as 47 minutes.   And goals scored in minutes added on at the end of the match were shown as their actual minute (i.e. scored at 5 minutes added on were shown as 95 minutes).

My distribution curve looked rather impressive but to be honest, A Level Maths with Statistics is a very long time ago (1986!) and I can’t remember how to read these graphs.   Perhaps statisticians on this group can shed some light? 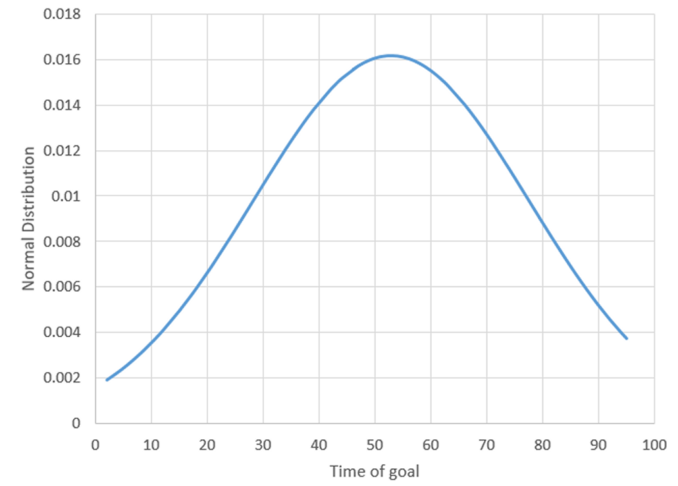 So I started to look at a frequency chart to see if that gave me something a little more readable.

This time, I took goals scored in time-added-on at the end of the each half and called them 45 minute goals or 90 minute goals. 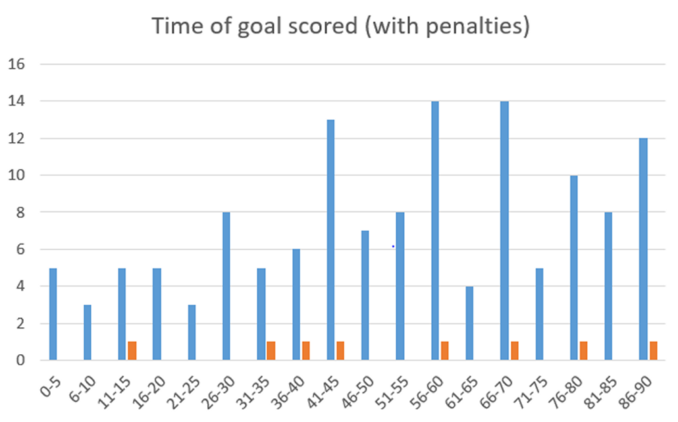 So what are we seeing here?   My take from this is that the goal scoring peaks are happening in the second half – the players are back on the pitch, they want that elusive goal – either to consolidate their lead or to get back in the game if they are lagging behind.    Peak scoring times were at 56-60 minutes and 66-70 minutes.   But is there also something going on at the end of each half – as per my original hypothesis with those peaks of 13 and 12 goals?

I looked at those 41-45 and 86-90 minute bars which included the extra time goals and were therefore longer than a 5 minute interval.  Splitting those goals out and giving them their own category (in red) gave me this: 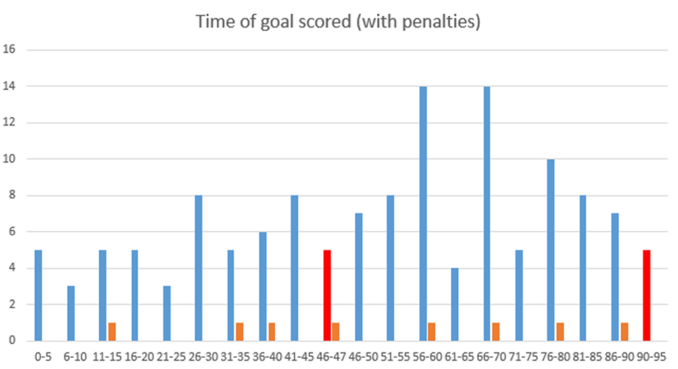 So my conclusion will be, it’s all about the oranges taking effect once the players are back on the pitch.     If you want to go and put the kettle on or take the dog for a walk, do it in the first half, but make sure you’re back for the 56th minute when the action will really kick off.

Another chapter from “Special Assignment” by my uncle John Alldridge (published in 1960 and now long out of print) A good reporter must be impersonal. He must write the story as he finds it, without [more…]