As there has already been a postcard from Lundy by Bassman, I am writing this as a complimentary continuation.  A few years ago I spent a few days on the island with friends so had a reasonable amount of time to explore.  The visit was combined with campaigning in Devon for the EU Referendum.  That may warrant another article.  There were other motivations as my last lady friend was born in Ilfracombe and I wanted to find out more about her background.  Unfortunately we saw little of each other during my visit and the dying embers of our relationship were not rekindled. 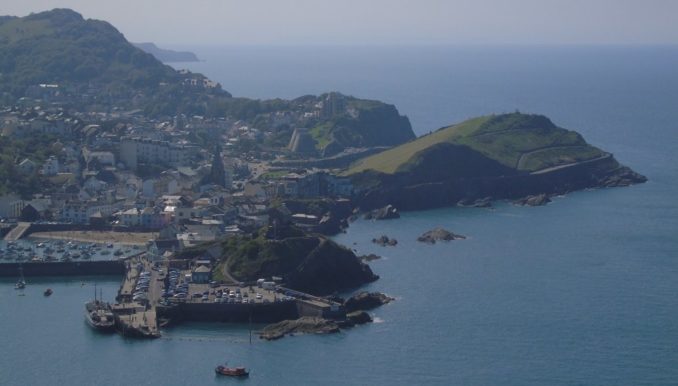 Ilfracombe is the main year round ferry port for travel to Lundy and has one of the highest tidal ranges of any port in the UK (30 feet is usual).  Between the North Devon Coast and Lundy there is a very strong tidal current where the MS Oldenburg struggles to make headway.  It is a clue to a massive gorge concealed beneath the waves where in times past the pre-glacial Rhine made its way to the Atlantic.  If the sea level ever drops again, Lundy would become the southern tip of Wales, not part of Devon. 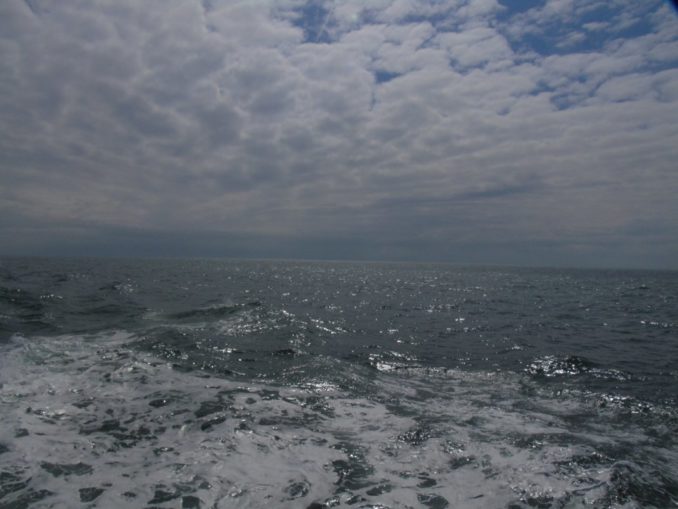 The landing point on the island is at the extreme South Eastern corner and there is a long steep walk up to the main settlement.  Lundy like many other offshore islands in the British Isles is no more than a big rock, three miles long with a top 400 feet above the sea. 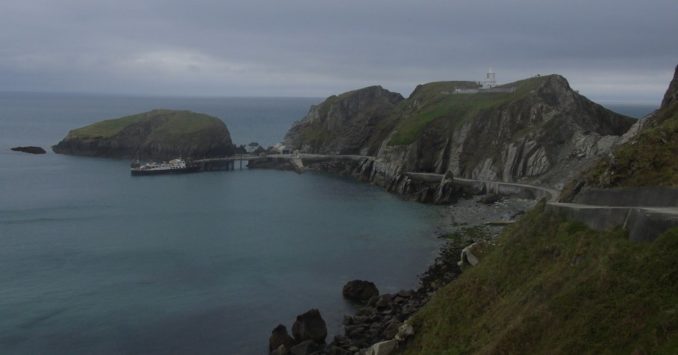 There are three lighthouses, two operational at each end of the island, and one abandoned near the settlement.  The lighthouse nearest to the landing is now only accessible by helicopter following a landslide, the helipad required being shown on maps and rather confusing. 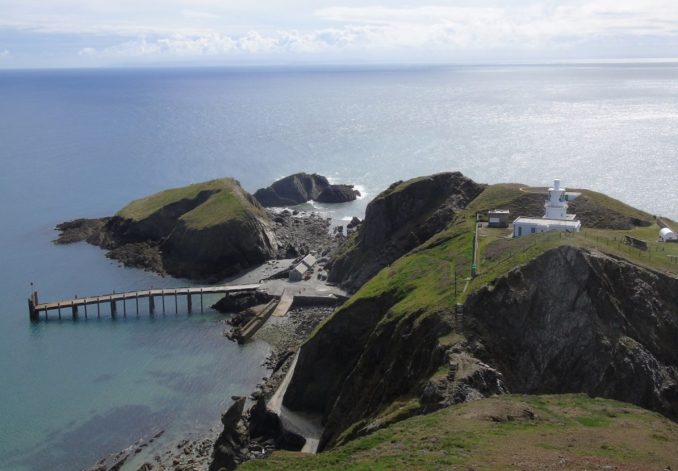 Overlooking the stair that once led to this lighthouse is a ruined medieval castle, part of which has been restored as holiday accommodation. 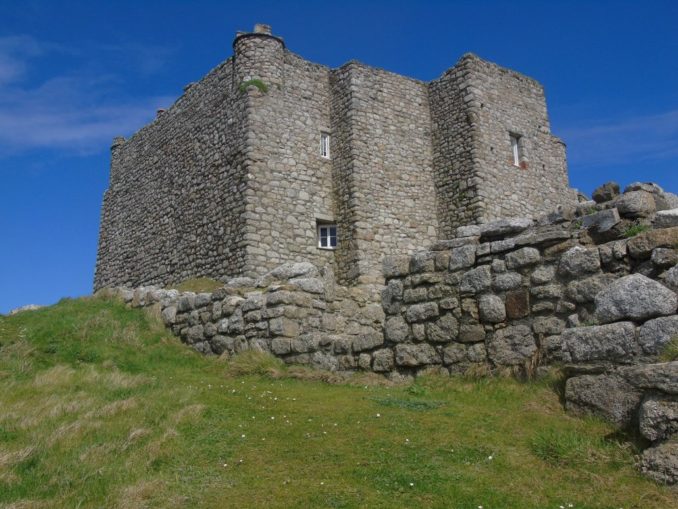 The settlement looks very compact seen from the castle with the old lighthouse on the left, St Helena’s Church centre stage and the Marisco Tavern on the right. 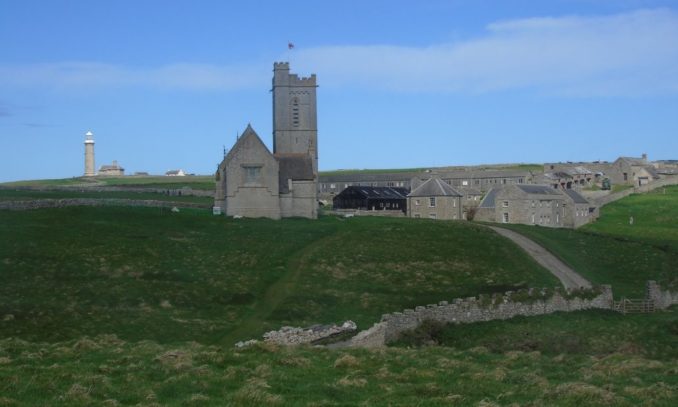 Overlooking the Devil’s Limekiln in the South West corner is one of Anthony Gormley’s better sculptures marking the 50th anniversary of the Landmark Trust, who now own the island.  Whilst being totally abstract at close quarters, from a distance it resembles a girl about to jump over the cliff. 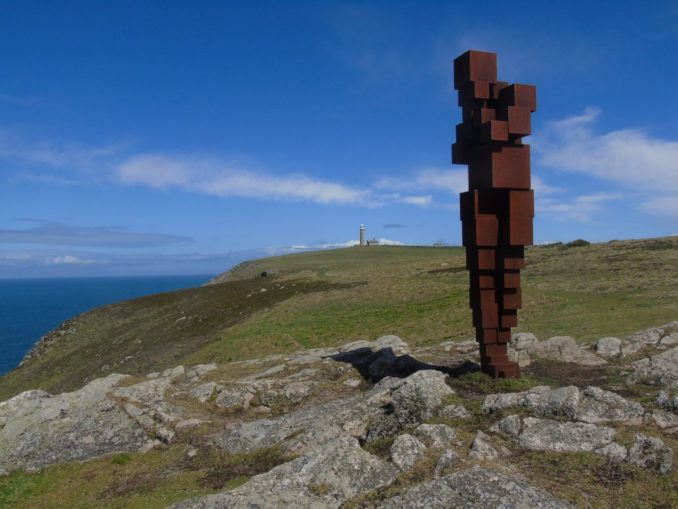 For those with plenty of energy and a head for heights, the old lighthouse provides a spectacular viewpoint especially in bad weather. 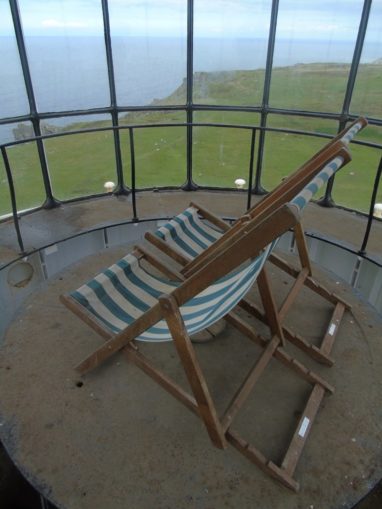 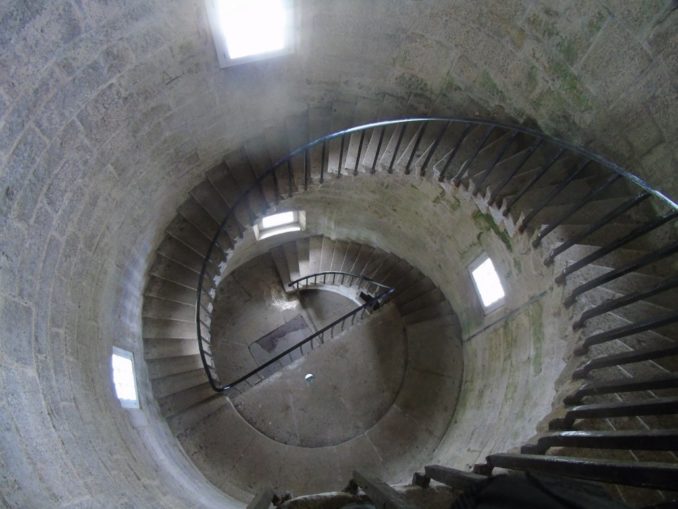 One of the less frequented attractions on the island is the old battery on the west coast.  The battery is quite a long way down the cliff with a barracks half way down.  A couple of rusted cannon remain in position.  I am quite sceptical about the battery being for firing blanks as a fog warning.  Another battery shown on maps at the North East Point is recorded by English Heritage as just one of a number of defensive gun platforms around the island. 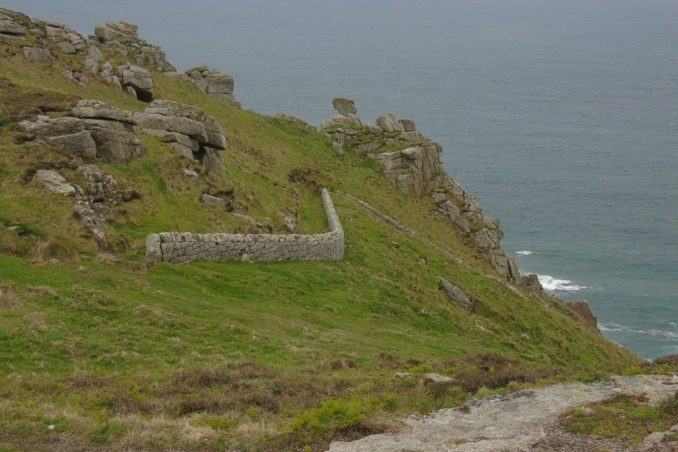 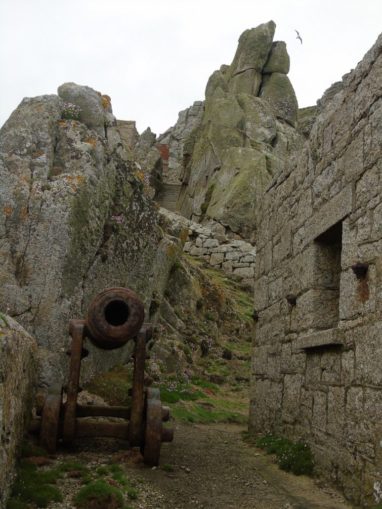 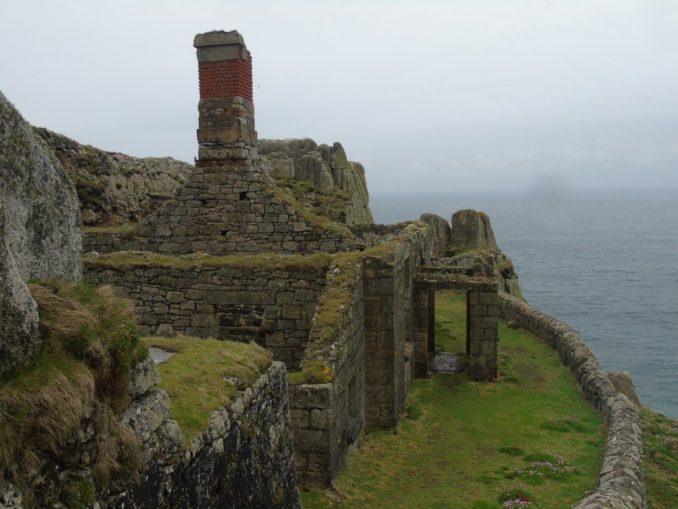 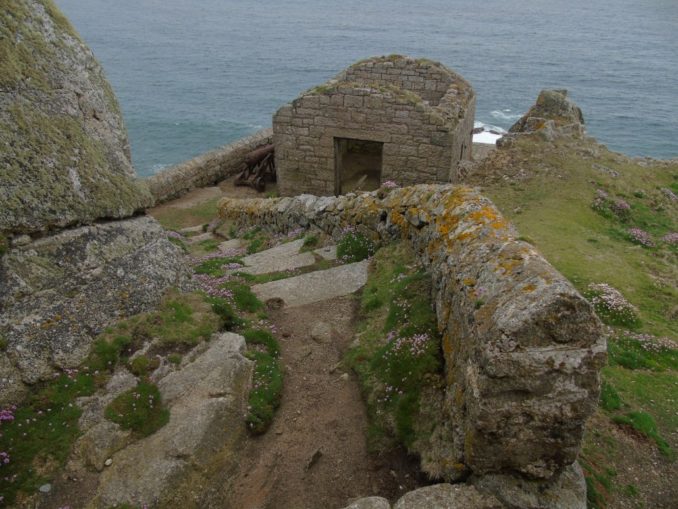 The West Coast bears the brunt of the weather and is dominated by huge landslips some of which were apparently caused by an earthquake in 1755.  This is where the remaining Puffin colonies are located.  Despite staking out the largest colony for several hours over two days I failed to get a single decent photo.  The Wheatears were more vain. 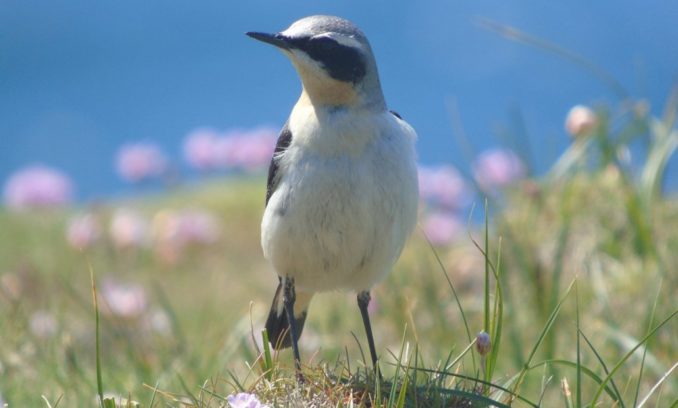 The lighthouse at the North West Point is more remote than the others and when manned was serviced from the sea using a small tramway with an inclined plane down to a narrow cove.  The steps down to the light are in a ruinous condition and require good walking boots and a great deal of care to negotiate. 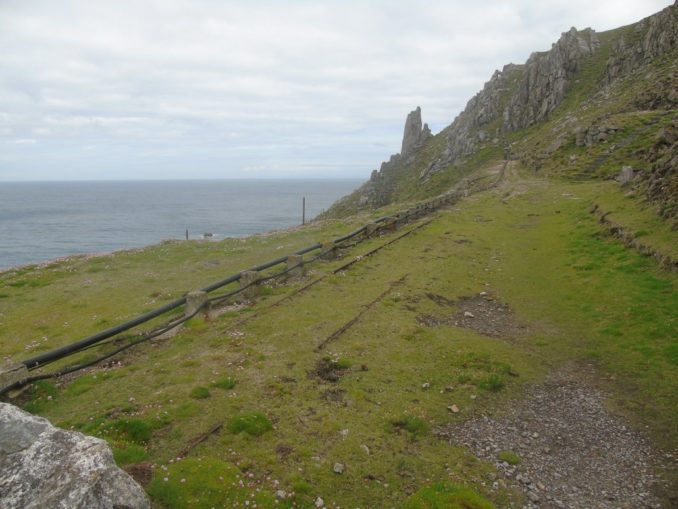 During my brief stay I made one full circuit of the island returning through the old quarries on the East Coast, and another cut short at the Quarter Wall.  The ruined Quarter Wall cottages once housed the workers from the quarries just below and are ideally placed for restoration into more tourist accommodation. 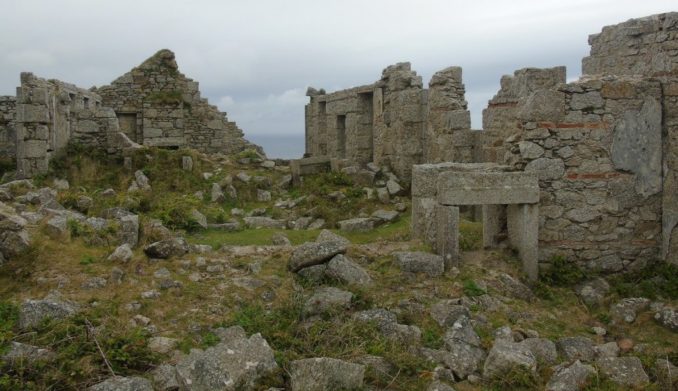 The (relatively) sheltered East Coast between the quarries and settlement is the area favoured by the feral goats and sika deer.  These animals are as shy as any Hollywood celebrity. 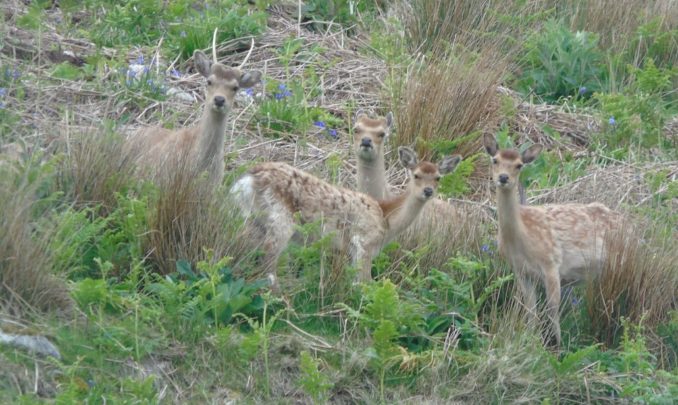 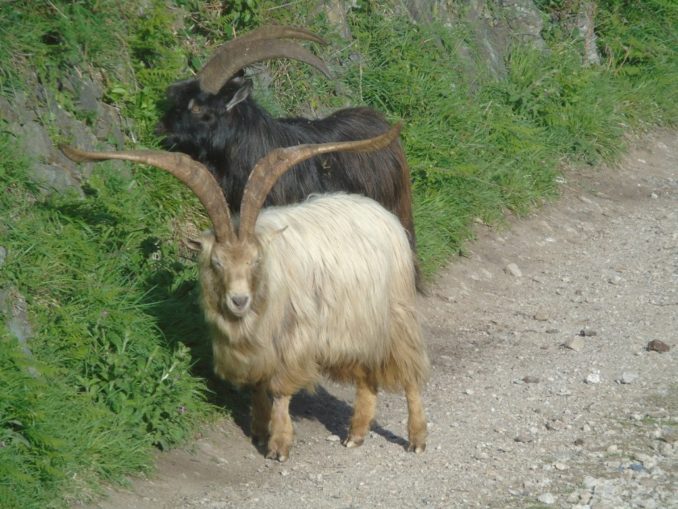 Lundy is split up into quarters by stone walls running across its width.  It has been inhabited in one way or another from the earliest times.  It is worth considering that when the island was first inhabited, the South Wales coast was much closer.  The process of land subsidence and coastal erosion that began with the end of the last glacial maximum is an ongoing process.  Gannets Combe on the sheltered north west coast was apparently the location of the original settlement but would now seem very exposed.

The cemetery is on the highest point of the island beside the old lighthouse and includes a ruined chapel along with a few standing stones.  It is probable that this was a burial place even when people lived at Gannets Combe.

Lundy is not a tourist attraction in the conventional sense and anyone expecting to be comfortable will be disappointed.  That said, I spoilt myself and stayed in one of the best rooms in Millcombe House.  Force 10 Gales with zero visibility are quite normal.  Good waterproofs and strong footwear are essential.  Even when it is not possible to stand up on top of the island, a path half way up the cliff along the East Coast provides a lot of opportunity for wildlife watching.  It is however a very rough path and not for the faint hearted. 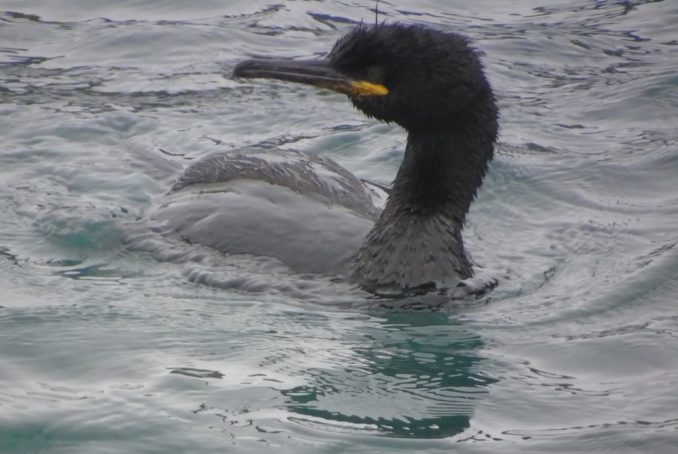 The journey back to the mainland was through driving mist, utterly miserable and best forgotten.

In preparing this article it was discovered that images of Ailsa Craig previously published by Going Postal with my consent have been pirated by a Third Party.  Legal Action is being considered as the thief has uploaded at least one image onto Wikimedia Commons claiming ownership, apparently as a means of promoting their own business.  The copyright symbol is not there for fun.

One of the better things that the ‘Anglo Philippine Friendship and Enterprise Company’ did was sponsor young people in their education and the earlier part of their careers. There’s a famous statistic that forty six world leaders were [more…]

I can’t understand why some people think that they have a right to a family. Children are a blessing and a lot of hard work. Old fools of my age are beginning to wonder about [more…]

With the prospect of a holiday (foreign or UK) looking increasingly unlikely Mrs Reggie and I decided we would try and fit in a number of day trips to break the tedium of everyday life.  [more…]