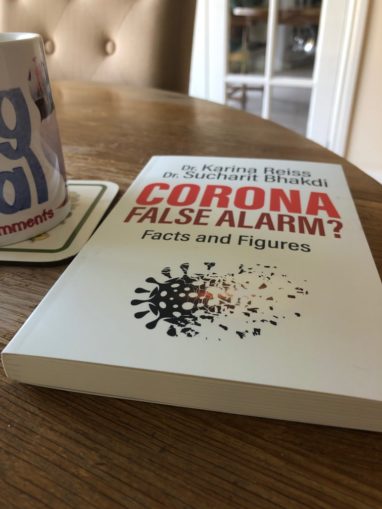 This very timely work was first published in German at the end of June 2020.  The English translation, published in September of the same year, contains some updates since the original work.

This is one of the first books I have seen published expressing views opposing worldwide governmental responses to the SARS-COV2 crisis, and it has become a number one bestseller in Germany.  The authors are very credible, given their extensive experience in biology and medicine.  Reiss has a doctorate in biology and has specialised in cell biology, biochemistry, inflammation and infection.  Her husband, Bhakdi, has an even more impressive set of credentials, having amongst others, held a post-doctoral research position at the Max Planck Institute of Immunobiology and Epigenetics in Copenhagen. He has published more than 300 peer-reviewed works on the subjects of immunology, virology and related fields.  It is safe to assume that they know of what they speak …. but where doubt lingers, the work is backed up with around 250 end notes providing references to further reading and research.

The book is surprisingly accessible, thanks partly to an easy-to-follow writing style and also to a very good translation from the original German.  The topic as a whole is subdivided into several sections and includes a final one on the role that both mainstream and social media are playing.

The first section provides a history of the virus and the early global response to it.  This is documented very well, from both a German and worldwide perspective.  There are numerous sourced charts and graphs, clearly demonstrating that the peak of the so-called first wave was over well before lockdown measures were introduced across the Western world.  Exceptions to lockdown nations are also covered, with particular attention to Sweden. Two things become clear quite quickly from this section. The authors believe that the SARS-COV-2 virus, with an infection fatality rate of between 0.1 and 0.27, is no worse than a bad seasonal flu, and largely kills over 80s with pre-existing conditions,  COVID-19 being “the straw that finally breaks the camel’s back” as they aptly describe it.  And the authors believe that lockdowns do not work, and in fact, the economic, health and societal harms that lockdowns cause will, over time, lead to a far greater loss of life than will COVID.

One very striking thing  is how similar the German experience has been to ours in the United Kingdom. It seems that our German friends have their own versions of Ferguson, Whitty, Vallance and Van Tam, to whom their elected leaders defer as eagerly as do ours, in adopting any and all recommendations of restrictions, regardless of the economic and societal destruction that these inevitably bring. Interestingly, confirming what I had felt for some time now, Ferguson’s name comes up repeatedly as the modeler whose work was adopted by much of Europe and the United States.  Indeed, the authors are up to speed when it comes to Professor Ferguson: they cite all his past failures in grossly overestimating the severity of previous epidemics

Also common to our experience is the German politicians’ and their advisors’ determination to ramp up the fear factor, to deliberately overstate the severity of the disease and in some cases, knowingly falsify the death statistics in order to keep their respective populations in line.  Unfortunately, this exercise has been largely successful in both countries and elsewhere, although the Germans were the first Europeans, perhaps due at least in part to the earlier success of this book in Germany, to start protesting in large numbers.  I remember looking at scenes of mass protests in the summer last year in Berlin, Hamburg and other large cities in Germany and wondering, in despair, why we were not doing the same here.

Chapter 5 is titled Collateral Damage and covers the well-known economic consequences of lockdown policies first. Also discussed at length are the other healthcare harms that these bring, together with the effects on the elderly and on children. The effects on the developing world’s poorest are catastrophic. In some countries, children are starving, because they cannot go to school, which is where they get the one meal a day they would usually have.  Loss of revenue from tourism will prove disastrous to those nations whose economy mainly depends on tourists.

Very relevantly to our current situation, the authors discuss vaccination. They are highly sceptical about both the efficacy and the safety of the range of vaccines available, particularly the DNA/mRNA gene-based ones, which they don’t feel have had adequate testing (and no doubt now feel that the UK government has rushed through the approval stage with unseemly haste).

Throughout the book, the German and other Western media come in for well-deserved criticism for their role in the crisis. One of the final chapters of the book is devoted to a more in-depth examination of both the mainstream media and social media. As in the UK, practically no journalist in Germany challenged the official narrative, instead choosing to act as the government’s servile mouthpiece.  As with our No 10 press conferences, not one journalist asked then, or asks now, any awkward questions at any Bundesregierung press conferences regarding the crisis. Indeed, much like our own, they prefer to scaremonger in order to raise the fear level to fever pitch, and to defame and marginalise any opinion that diverges from their own government spoon-fed one,  á là Piers Morgan,  Kay Burley and Beth Rigby. Social media is also named for its increasingly censorious, anti-free speech methods – the authors themselves have been victims of both mainstream marginalisation and social media censorship. Without the cooperation of the mainstream and social media, lockdowns would have been far harder to impose for such a lengthy period of time.

The authors of the book end with a plea:

“We are bearing witness to the downfall and destruction of our heritage, to the end  of the age of enlightenment.

May this little book awaken homo sapiens to rise and live up to their name. And put an end to this senseless destruction.”

Quite so.  I recommend all of you to read it.

“Big Trouble in Little China” by warpafx is licensed under CC BY 2.0 As a director, John Carpenter is very much hit and miss when it comes to critical acclaim and box office success. For [more…]

Can lost production ever be recovered?

It’s easy to blame Covid-19 virus for the nation’s woes and, up to a point, that’s understandable. People who focus exclusively on the nation’s health tend to pay less attention to the economic damage wrought [more…]

You vaccinate me so

I’ve been talking to people, way more than I would ever talk to them, people are fine in short bursts, fifteen or twenty minutes is usually enough but in this wonderful, whacky world of lock-down-in-up [more…]