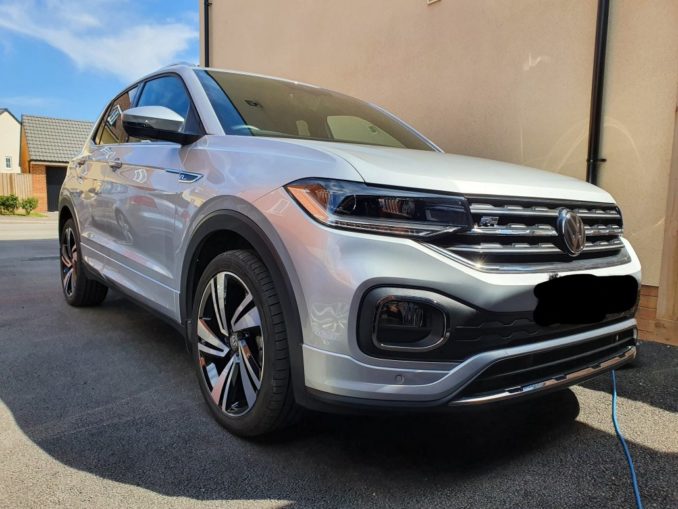 As GP has recently turned into an alternative source of information for the motoring enthusiast, I thought I would join Always Worth Saying and Phil the Test Manager in writing a motoring review.

We took delivery of the VW T-Cross in mid November last year.  Prior to ordering the car Mrs Reggie and I tried a long list of potential replacements to her VW Tiguan.  The Tiguan had been an excellent work horse whilst Master and Miss Reggie were growing up but we now found ourselves in a position where we no longer needed a large SUV / estate car.  Top of the list of must-haves was a high seating position.  The Tiguan was excellent in this respect and we spent some months arranging test drives with various different manufacturers in an attempt to find something suitable.  Frustratingly most of the cars we sat in had a seating position which was no different from your average saloon or hatchback and were ruled out for this reason alone.  The best of the bunch, at the time, was the Volkswagen T-Roc.  It wasn’t perfect by any means but with nothing else to choose from it looked like that was our only viable option.  However, in April 2019 the Volkswagen T-Cross was launched in the UK and we eagerly arranged a test drive.  The T-Cross is slightly smaller than the T-Roc but oddly has a bigger boot.  Thankfully the seating position was declared to be ‘satisfactory’ by SWMBO and we spec’d up our car with the local dealer. With it being a brand-new model discounts were minimal; however, we got a good deal on our Tiguan which made up for it.

The model we ordered was in R-Line trim and had a few extras including a reversing camera, heated seats and one of two other items I can’t recall now.  The R-Line is pretty much the top spec anyway so there wasn’t a huge amount more you could add to it.

It took just over 7 months for the car to be built and delivered, which was ideal for us.  However, all was not entirely well.  We quickly noticed an annoying squeak coming from the passenger side, near the front air vent.  It only happened whilst the car was cold and as soon as the cabin warmed up it disappeared.  We also started getting random error messages on the central display which cleared when switching the engine off and back on again. 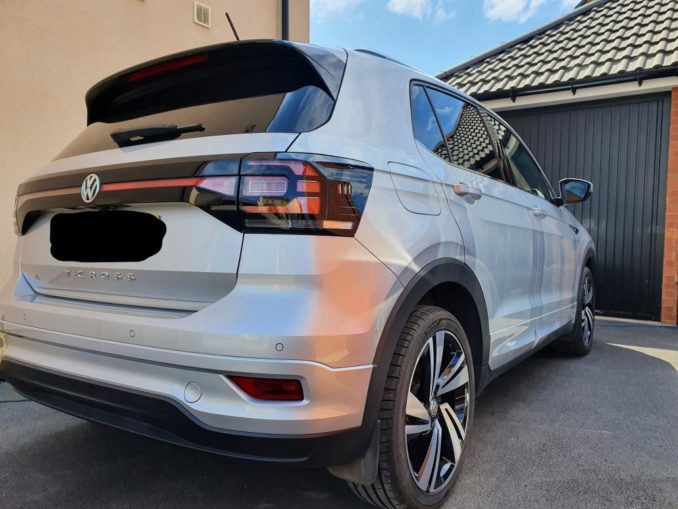 Both issues were fixed by the dealer (on the second attempt).  The squeak was caused by one of the hoses (bringing air from the heater matrix into the cabin) rubbing on the rear of the glovebox and the second issue was caused by a break in the wiring loom which was grounding out on the car body.  Since then we’ve had no further issues at all.

Prior to ordering the T-Cross we took one out on a test-drive.  At the time of launch you could only buy one with a 1 litre, 3 cylinder petrol engine in one of two power outputs, 95BHP or 113BHP.  I was initially concerned that this small engine would be sluggish and rough.  I couldn’t have been more wrong.  It’s simply astonishing – pulling hard when you need it, with roughness only creeping in at higher revs when accelerating hard.  In normal use you wouldn’t be able to tell it apart from a 4 cylinder engine.  As the T-Cross is quite a light car it really doesn’t need a more powerful engine (you can now specify a 1.5 litre petrol engine if need be).  It copes admirably around town and I’ve used it on longer motorway and dual carriageway journeys without any issue at all.  It keeps up with everything but the sportier cars on the road.  Fuel consumption is pretty good too with high 40 MPG being easily attained.  One thing I would recommend is to use premium grade fuel.  Initially I used the standard Shell unleaded petrol but now use their top of the range “V-Power” petrol.  It makes a noticeable difference and makes the engine more eager to pull and easier to drive without the need to change gear.  As we’ve covered 5,000 miles the engine has also loosened up, which also helps. 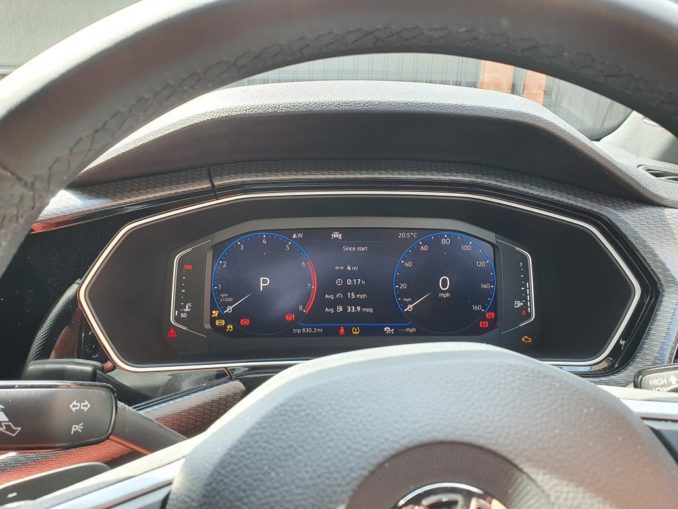 The inside of the T-Cross is a pretty nice place to be.  The seats are comfy and covered in an attractive cloth and fake suede material.  The dials are virtual, with the traditional speedo and rev counter being replaced by an information screen giving a variety of different display options.  The satnav is pretty good and you can also connect your Apple or Android phone to the car and access all the apps on your phone from the central screen.  This is quite frankly of no interest to Mrs Reggie or I so we can’t report on how well this works or not. The radio works well.

The rear seat has a neat little trick.  You can slide the whole seat back and forward, useful if you have no passengers in the rear and need a bit more boot space.  With the seats folded down the space available is pretty impressive. 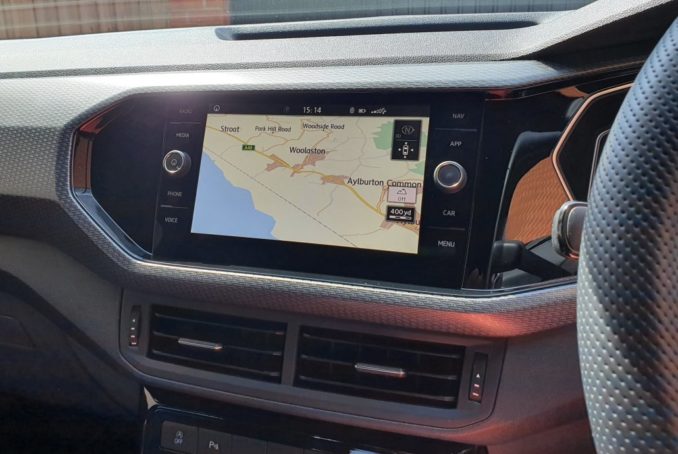 One thing which annoyed Mrs Reggie about the Tiguan was the hard ride.  It crashed and bashed over every little bump in the road.  The T-Cross R-Line spec comes with 18 inch wheels as standard.  I would have preferred a 17 inch wheel as that would have guaranteed a compliant ride, but it was not possible to change the wheel size on the R-Line, so 18 inch it was.  Thankfully the ride is more than acceptable, comfy and handles potholes without causing fillings to be dislodged.

Having first driven an automatic car in 2010 neither of us wanted to go back to a manual gearbox so we specified an automatic, or “DSG” as VW call it.  The DSG gearbox has come in for some criticism in some quarters over the years.  There have been complaints of it being a bit jerky and prone to failure, but it works well in the T Cross and having had several cars with DSG gearboxes over the years without any failures or problems I had no qualms about ordering it for our car. 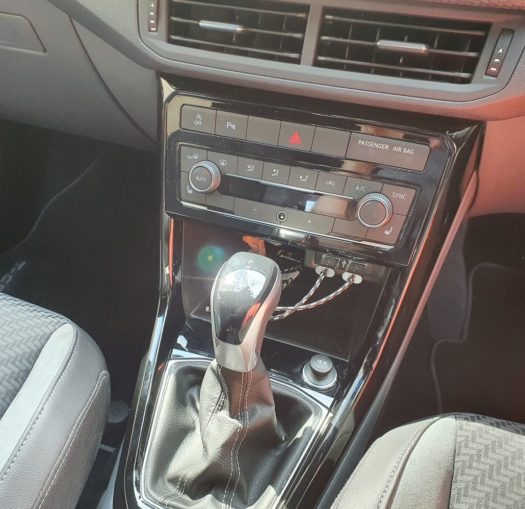 Lookswise I really like the T-Cross, I think it looks great from just about every angle.  It may not be to everyone’s taste but I like it and frankly I don’t care whether anyone else does or not.

Oddly enough the T-Cross comes with a traditional manual hand brake.  Our Tiguan had an electronic one that came on automatically every time you came to a stop and it took a bit of getting used to going back to manual one. 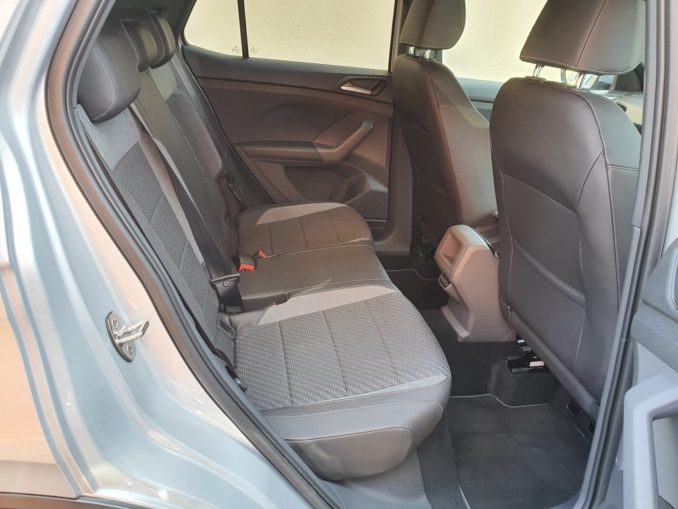 Other features I like are the heated seats (fantastic in winter) and the abundance of USB ports (good for charging devices).  Overall, it’s a cracking little car and for those who want the high up seating position and ease of getting in and out of a car I can thoroughly recommend it.

As a new or second-hand buy I think these make a really interesting proposition against some of the competition and well worth a look. 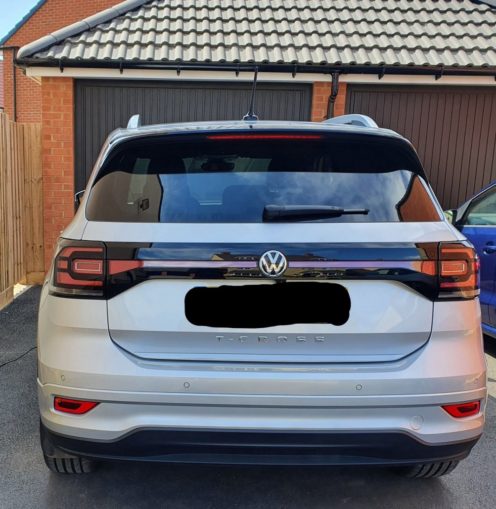 Codswallop! This article is about a type of Victorian bottle invented by Hiram Codd, a British bottle inventor. Invention of the ‘Codd’ Bottle. Hiram Codd worked for the British and Foreign Cork Company and during [more…]

Book Review: The Devil and the Dark Water by Stuart Turton

This is the second novel by Stuart Turton, his first being the excellent The Seven Deaths of Evelyn Hardcastle, which I reviewed a few months ago. Turton has created another ‘whodunit’ story, this time on [more…]