“O Oysters,’ said the Carpenter,
You’ve had a pleasant run!
Shall we be trotting home again?’
But answer came there none —
And this was scarcely odd, because
They’d eaten every one.”

In Victorian times oysters were cheap and readily available throughout London.  They were used as a substitute for beef, which was much more expensive, in stews and soups.  In the early 1900s some council workmen relaid some sewer pipes in Emsworth, which lies at the top of a branch of Chichester Harbour midway between Chichester and Portsmouth. One of the oyster magnates built some oyster ponds close to the outflow, with the result that the oysters became contaminated.  This led to the poisoning of several dignitaries with typhoid, and as a result the British oyster market collapsed.

Today there are only a small number of oyster firms in the UK. Global oyster production is dominated by Chy-na, which produced 82% of world production in 2014. Other major producers are South Korea (6%), the USA (4%), Japan (3%) and the EU (2%). Whilst world production is increasing there has been a significant reduction in oysters produced in Japan, the USA and the EU. Of the European producers France produces over 82% of EU production, Ireland 11% and the Netherlands 3% (Source FAO).

Throughout the coronavirus lockdown I have been supporting my local street market, and one of my favourite stalls, the fishmonger, has been doing a roaring trade. It’s amazing how they can fit three burly fishmongers in a tiny wagon and still social distance at the same time. One of my prized purchases has been the oysters. These little bundles of protein are sold individually for 79p or by the box. Mostly they’ve been French but lately the more expensive Irish oysters have been in stock. 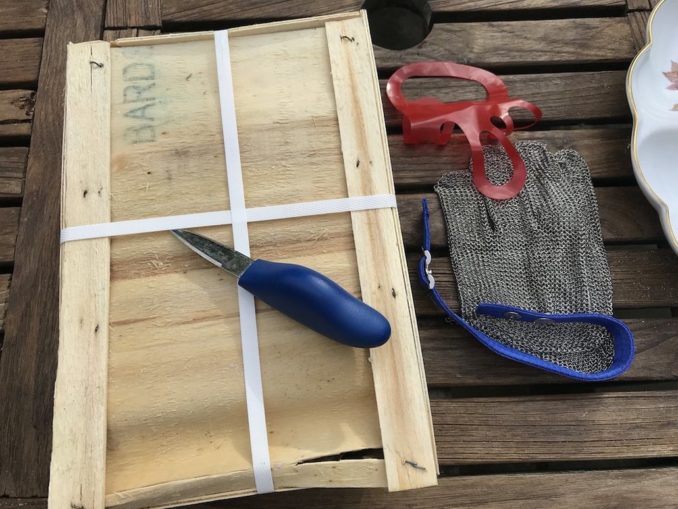 Having procured your oysters, open the box and feast your eyes on the task ahead. 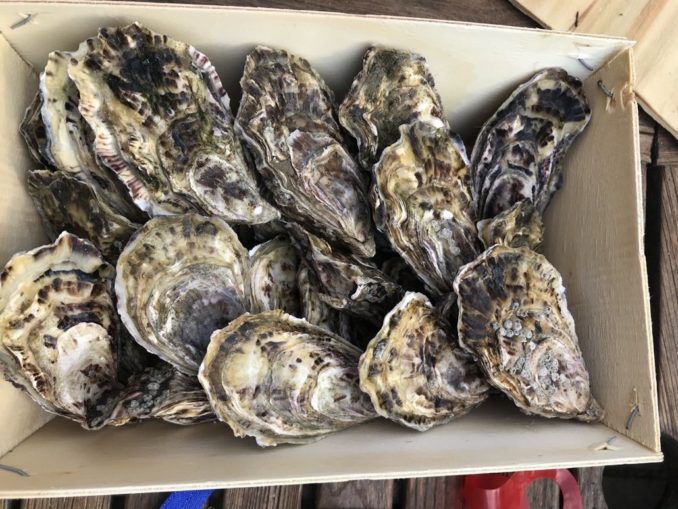 First thing to do is shuck the oysters. For this you’ll need a flat surface (preferably outside as the oysters can have a reasonable amount of liquid in them) and something to shuck them with. I have an oyster knife, but anything with a relatively sharp point and a flat blade surface will do. You don’t need a long blade, a shorter blade is probably safer as it allows you more control. I have an oyster glove to protect my hands, but you could equally use a tea towel to hold the oyster with. The key is prevent your holding-hand being lacerated by the sharp edge of the oyster shell or stabbed by the shucking implement. 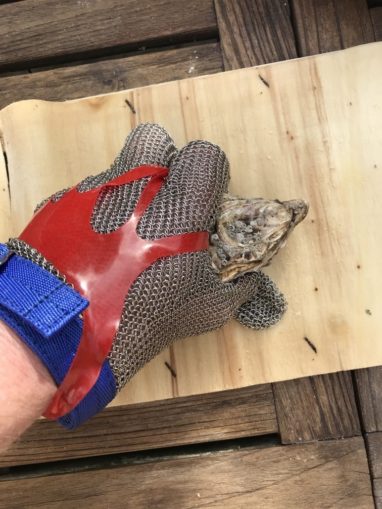 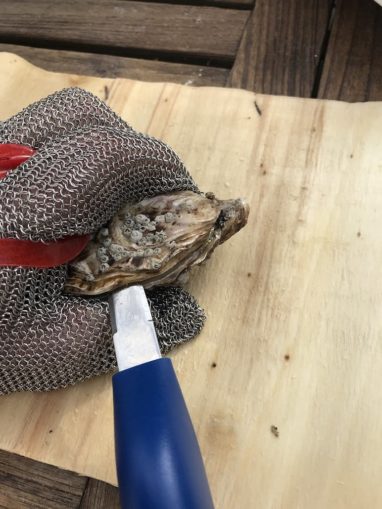 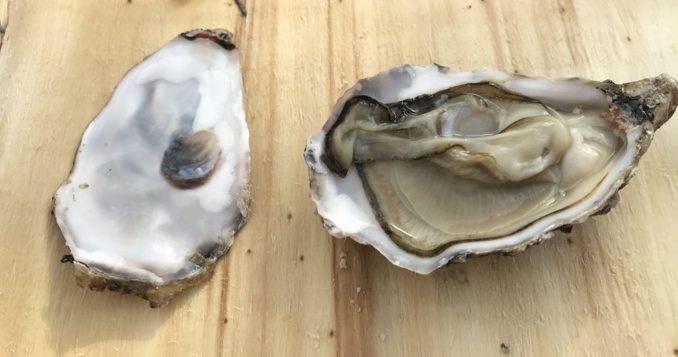 Repeat the process until you have finished shucking all the oysters you are going to eat. If you are not going to eat them all at one sitting leave the ones you’re going to have later unshucked and pop them in the fridge to keep fresh. As with all seafood you should eat them within a couple of days of eating. A dodgy oyster is not something you should wish to be eating.

Now you can sit back, relax and admire some egregious product placement alongside your handiwork whilst contemplating the next steps. 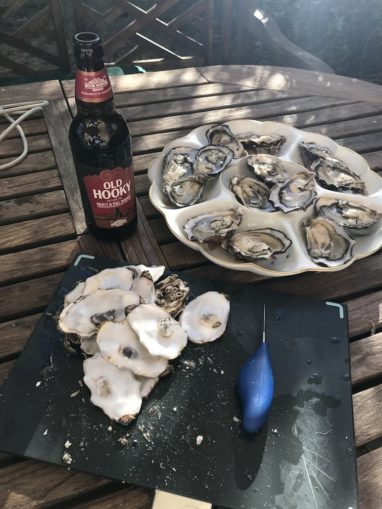 Most people eat their oysters raw. I usually make a little vinegrette to go with mine when I eat them like this. I chop a red onion or shallot up fine and pickle them in a little white wine vinegar. I put a dollop of this into the oyster shell then eat the oyster and mixture in a single mouthful. Alternatively a dash of Tabasco chilli sauce also enhances the flavour. 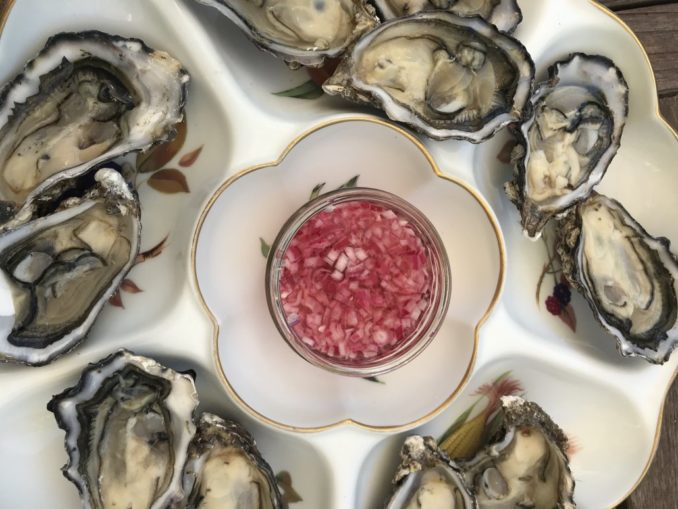 Another favourite recipe of mine is to grill the oysters with double cream and parmesan. For this you need to remove the oyster from its bottom shell and reserve it into a ramekin. 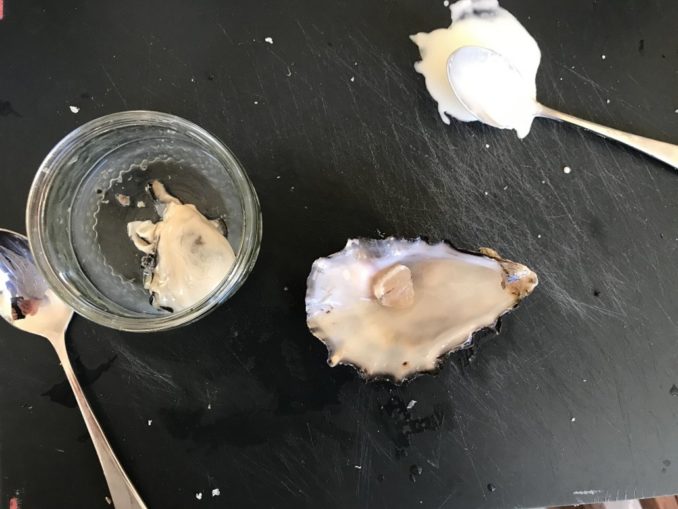 Put a couple of dollops of double cream into the shell, and grind fresh black pepper onto the cream. Use separate teaspoons for the oysters and the cream, as you don’t want to be dipping the oyster spoon into the cream. I use a Yorkshire pudding tray to balance the bottom shells on so the contents don’t spill out whilst they are cooking. Some books recommend using rock salt as a mouldable rest for the shells. Once you have ground the black pepper over the cream pop the oyster back into its little nest. 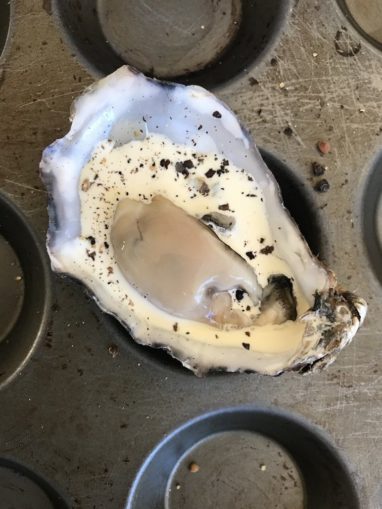 Once you have popped all the oysters back you can grate parmesan cheese liberally over the oysters and get the grill ready. 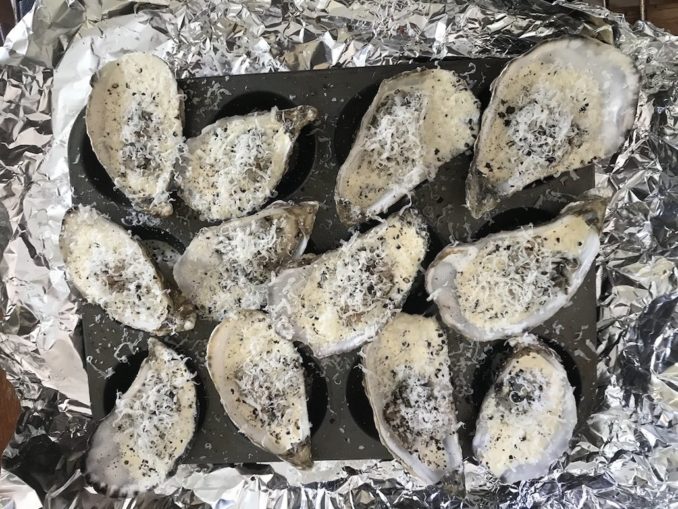 Grill the oysters for 8-10 minutes. You’ll see that they are ready by looking at the colour of the cheese on top. Once they’re done take them out and eat them using a teaspoon to empty the contents of each shell. The shells will be hot to start with, so be careful not to burn yourself. 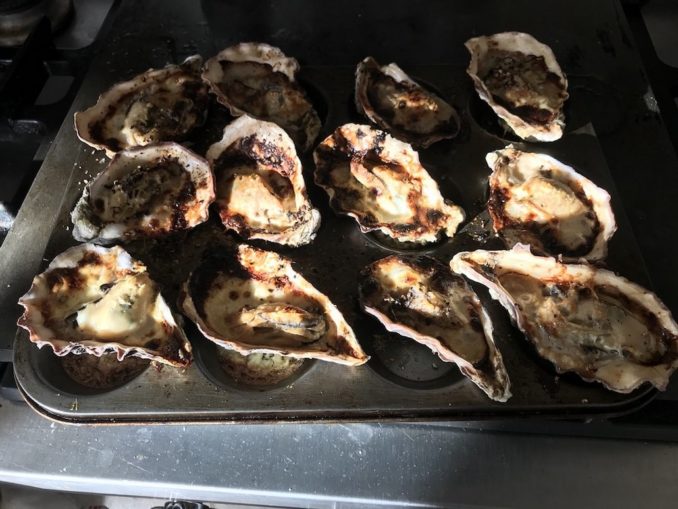 Sometimes I add a little chopped fresh tarragon to the recipe to add an additional flavour. 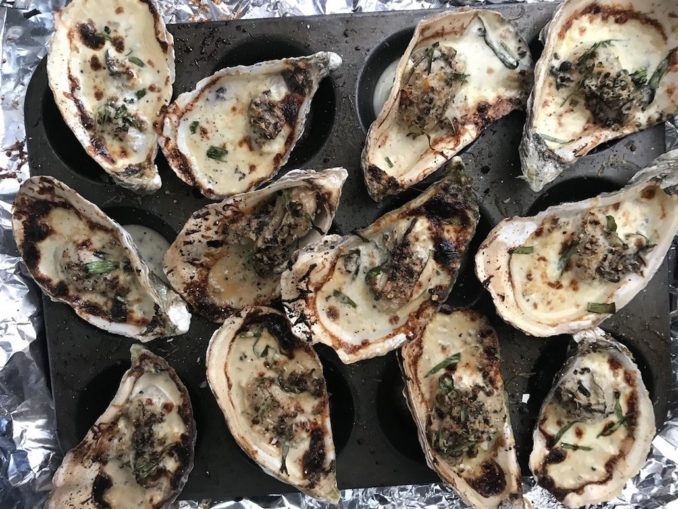 Oysters Rockefeller was created by chef Jules Alciatore in his New Orleans restaurant “Antoine’s” in 1899. He called it Rockefeller because he knew “no other name rich enough for their richness”. The actual recipe he used has never been divulged, but enough is known about the ingredients to have a stab at it. Some people add bacon and other ingredients but I’ll use a more traditional one.

You’ll need a small onion chopped fine, a finely chopped garlic clove, some spinach (no need to buy fresh, frozen spinach is cheap and keeps forever in your freezer). Thaw the spinach, drain it and put it in a blender with the onion, garlic, whatever fresh herbs you like (tarragon, parsley and chervil work well) and a generous amount of breadcrumbs. 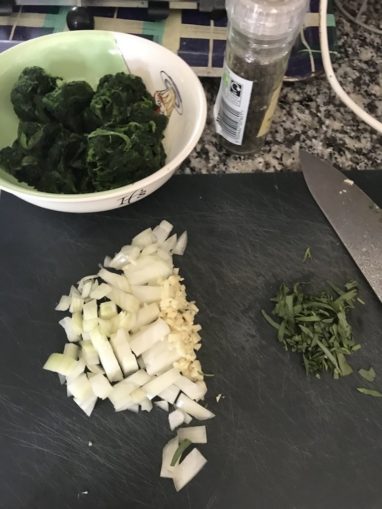 After a quick blitz in the blender add a quarter of a pack of butter. You want the butter at room temperature so it blends well. 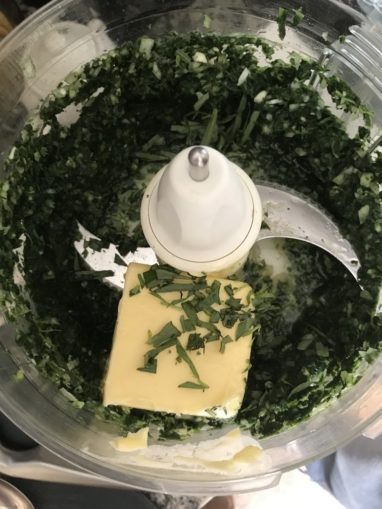 Once this is blended you need to add a little aniseed flavour to the mix. Many recipes state Pernod, but since we currently don’t have any in the house I stuck a generous splash of Ouzo in instead, with a seasoning of freshly ground black pepper. 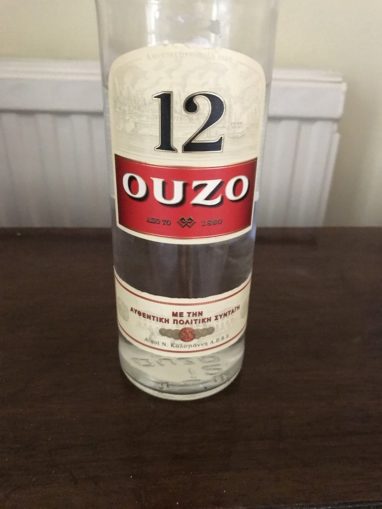 Spoon the mix over the oysters in their shells, once again resting the shells in a Yorkshire pudding tray. You might like to place the tray on some aluminium foil with the edges curled up, as once the butter melts it could get messy underneath. 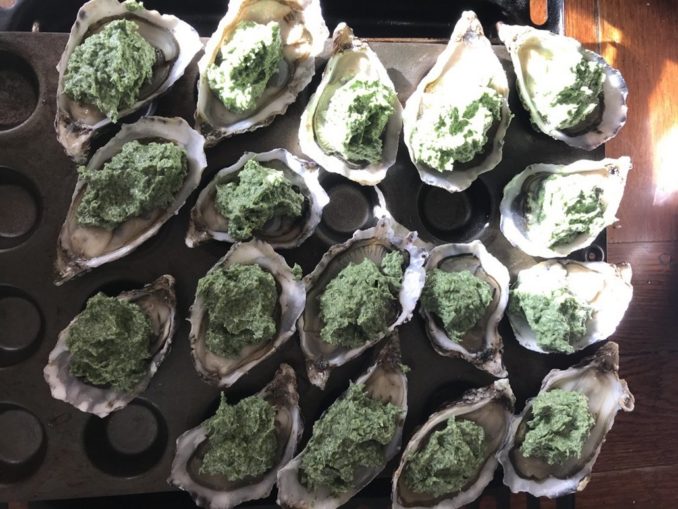 Once again grate parmesan cheese liberally over the oysters, and prepare for grilling. Any unused mix can be frozen for next time, and trust me once you’ve tried them once there will be a next time. 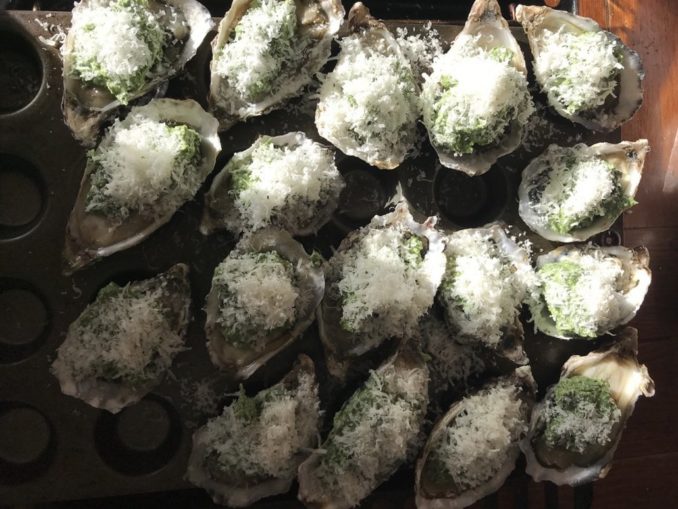 8-10 minutes under the grill again should turn your oysters into delicate little morsels of heavenly joy. 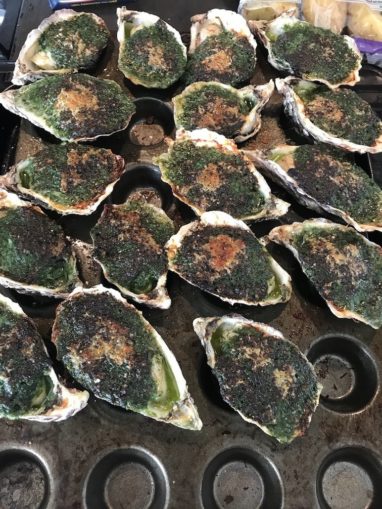 You know who you are. You can cook, possibly even turn out a decent meringué or even a soufflé, but the mere thought of baking a loaf of bread fills you with irrational fear. The [more…]

I have never been a fan of Bitcoin (“BTC”). Of course you would have made a fortune if you had purchased some back when it was first invented in 2008 and released as open source [more…]

As a young child in the 1950 I used to love to visit the sweet shop to spend some of my pocket money. One of my favourite places was called the Kabin, a very small [more…]