Of all tyrannies, a tyranny sincerely exercised for the good of its victims may be the most oppressive. It would be better to live under robber barons than under omnipotent moral busybodies. 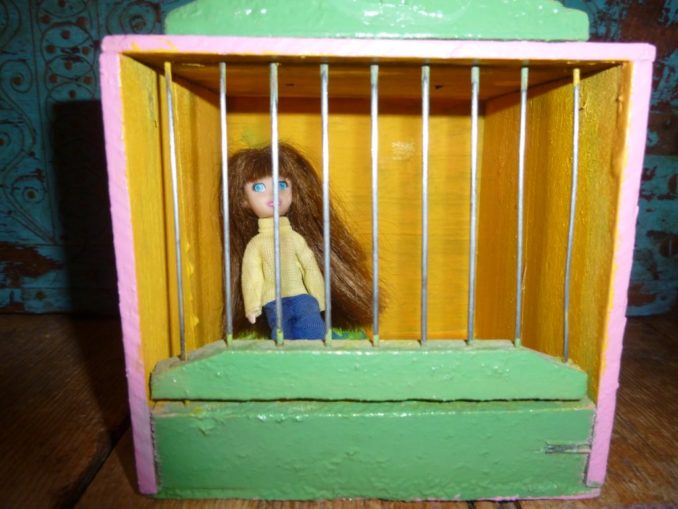 Greetings from the Great Confinement, Rance under its tinpot dictator MacRunt. MacRunt had a heartbreak recently. Adolfa the Hun ended their relationship and now she will not even take his phone calls. It was believed for a time that she had been infected with the Peking Bug. Alas, she tested negative. Without his mother-lover MacRunt is rudderless. So he decided to give up granny-bothering for a, hopefully short, time and bother us instead.

Eight days ago the government sent us all an SMS at eleven o’clock at night ordering us to stay home, or else…

I erupted in fury.

“How did that scum get our number?” I asked Pepita who was already staring menacingly at the phone, her teeth bared.

We turn in early in this house. Pepita will not have it otherwise.

We have been given an existential choice between house arrest and a six-month prison sentence. Considering that Rance hides the fact that seventy-five percent of its prison inmates are enrichers, I would rather not go there, thank you very much. Because the Powers-That-Be are so nice, we are still allowed to venture out to buy bread or milk, but we must carry an attestation written and signed by us showing that we authorise ourselves to step out of the house for fifteen minutes. Exercising, with which they had been boring us silly for the last few decades, became illegal yesterday, or so the Prime Minister, a scruff complete with mangy beard, announced. For years, they hammered into our thick skulls that we did not exercise enough which was why we were fat, and presumably stupid as well. Now, we are being accused of exercising way too much, thus spreading plague, cholera and the Peking Bug.

Overnight, gay Paree became a ghost town, empty of cars and pedestrians, all shops closed save for supermarkets. They only let customers in one by one, so we have to queue outside in the bitter cold and wind, which, as you can imagine, is very healthy.

I make it a point to go out once a day just to prove to myself that I am still free, an illusion of course, and do not take orders from small men, but the streets feel eerie and rather frightening as in a horror film. I keep remembering Russian friends, who had experienced both, telling me that house arrest was far more damaging than the Gulag. I have had to set aside the two doll’s houses I started before the Great Confinement: the wood shops are closed. (Don’t start!) I hope they are still in business when this apocalypse ends. The owners had become friends.

In despair, I considered taking to the bottle, but alcohol does not agree with me, or I do not agree with it because I am contrary, so I bought a supply of Evian and drown my sorrows in that instead. 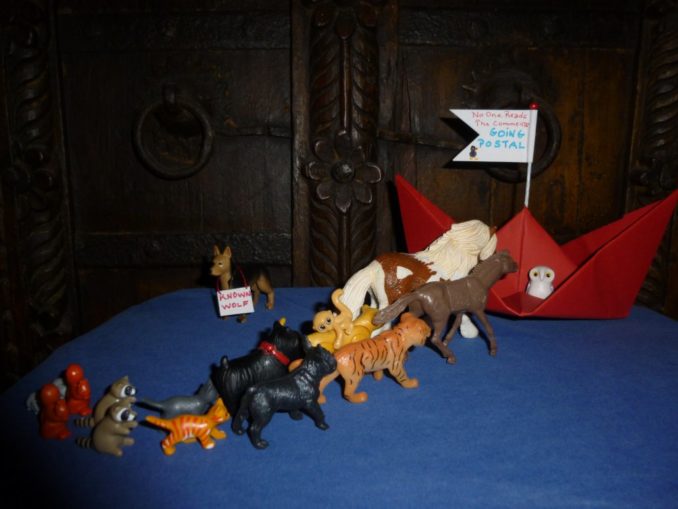 At eight o’clock every evening French sheep presumably watching the television news (TV is banned in my home) loudly applaud doctors; a few even bang on pots and pans very much like chimpanzees. They remind me of an advertising campaign against dog mess from more civilised times in which the dog said, “I do where I’m told to do, me.” Many French people now do where MacRunt, soon to become MacRuin, tells them to do, having forgotten venal and incompetent doctors they, like everyone, must have encountered in the course of their lives.

Just before the Great Confinement my broad-bottomed, goggled-eyed neighbour (I am sure Jen the Blue, may God rest his soul, would have found her wouldable) found herself a new soy boy-friend. They are blissfully holed up in her hideously-appointed flat and avoid everyone literally like the plague.

But there is worse! Today the Electricity Board is sending us the meter man, a Muslim who will go door to door spreading pestilence, and it is also the day the building agent picked to have our kitchens sprayed against cockroaches. Wait, it gets even more absurd: tomorrow the gas meter man is coming. Look for the logic in the above. If you find it, I’ll buy you a cream puff from the pastry shop across the road, which is closed even though it sells food. Provided cream puffs still exist…

I am reading about daily life in Russia under Stalin at the moment and cannot help marvelling at  the vast amount of liberty people had. What a benign, pragmatic dictator he was compared to our own! How dared those people complain? After all, most were allowed to go out, work, attend school, shop, have their hair cut, drink in bars, eat in restaurants, meet with friends and relatives. They had, utter utter blissikins, the right to send parcels unlike yours truly who sold old rubbish on Pigbay (where rubbish belongs) and is stuck in a small flat full of brown boxes because the post offices decided to self-isolate, or some such nonsense.

And now, Bojo the Clown, who must be a fashion victim, has put Britain under lockdown as well just when I was considering fleeing there. I suppose he had to do it, otherwise he might have been expelled from the despot club, a sorry outcome indeed.

I cannot fathom what our masters expected when they invented globalism. A child of four, or even my dog, would have foreseen that when you trade with heathens from the fundament of the known universe, whose hygiene is wanting to say the least, what you get is plague, cholera and killer viruses. After all, the Black Death came by ship from China. What am I talking about, silly me? History is for common people, not for the great and good.

Still, beloved readers, there might be light at the end of this very long and dark tunnel: the Peking Bug is said to be extremely harmful to the very old. Geriatric Sorearse is many things, but a young man he is not.

It is a while since I’ve written anything on here, mainly through lack of anything worthy that would get anywhere near the quality of pieces we see every day on such a wide range of [more…]

The Great Escape, Part One

Facts: Have been not reading the comments on here for some time; ignored the MSM (for facts) for longer. Have a house in England and, thanks to a modest inheritance from my wife’s uncle, we [more…]