A few miles south of Legs Cross Bank, Dere Street crosses the River Tees at a place called Piercebridge, the Roman Morbium.  Although no more than a village it is still regarded as a town by locals and until the coming of the turnpike roads and railways was more important than nearby Darlington.

The main road through the village is now the A67 from Darlington to Barnard Castle which is modern in almost every respect.  The old roads running east to west up the Tees Valley were much further to the north and south.  Dere Street is still the B6275 (Old A68) at this point and as well as being a good shortcut on the road to Scotland the village offers plenty of refreshments, superior to those at Scotch Corner.  On the Yorkshire side of the river is the old coaching inn called The George.  Overlooking the village green is an organic farm shop complete with cafe and post office.  To the north alongside the old A67 is a Gastro Pub called the Fox Hole which looks out at the back onto the Piercebridge Beck.  A few years ago it was called the Carlbury Arms and a typical farmers’ village pub.  Across the A67 and occupying part of the old station yard is one of Sam Turner’s Garden Centres, complete with another cafe.  The station has vanished along with all trace of the railway line that I travelled on as a child.  This was technically the Darlington Branch of the South Durham & Lancashire Union Railway, aka the Stainmore Line, whose mainline ran from Spring Gardens Junction near West Auckland to Tebay Junction on the West Coast Mainline.  Spring Gardens is important in railway history as being the point where the western end of the original Stockton & Darlington Railway split into two, before the Shildon Tunnel connected it to Bishop Auckland.

The Roman remains here fall into two parts: the southern abutment of the second Roman bridge and the eastern edge of Morbium itself.  Most of Morbium lies beneath the modern village with the village green occupying the centre of the fort.  The most direct entrance to the ruins is opposite the farm shop and just to the south of the Church.  They can also be reached by a footpath from the north abutment of the present bridge which leads up to a point close to the junction between the A67 and B6275, opposite the Fox Hole.  There are four discreet parking spaces at this point on the old A67.  Parking on the village green should be avoided if possible as the road is always busy.  There is a very large car park for visitors to the Roman Bridge, with access east of the George.  It is a good place to practice driving before an expedition to the Moon or Mars.

The ‘modern’ bridge was built in 1673 and widened in 1781.  It springs directly from the eastern end of a cliff on the southern bank of the Tees and takes an oblique path over the river to land in the middle of the village.  The dates suggest that the Roman bridge survived like many others into the 16th century when a series of extreme weather events related to a rapidly cooling climate swept them away.

There is as usual a lot of misinformation associated with the interpretative plaques erected around the village.  A lot of this centres around two facts:

1) The River Tees used to flood very dramatically in spring when the snow on Cross Fell began to melt.  This only ceased when Cow Green Reservoir was built in 1970.  The course of the river through Piercebridge has not altered over the last 2,000 years as it flows over bedrock.

2) The first bridge to be built at this point was not on Dere Street but on an earlier road running from Richmond to Durham City.  The Roman Fort is in fact aligned with this pre-Roman bridge, which also separated the fort from the civilian settlement.  Hopefully the map will explain this better than words.

There are a number of linguistic reasons for believing that ‘Pierce’ is what the ‘Brigantes’ actually called themselves.  The Brigantes (Priganti) being ‘The Rulers’ and the Britons (Pritoni) being ‘The People’.  The name crops up in various forms wherever P-Celtic tribes held territory across Europe.  Whatever they were called the bridge they built at this point had a very high springing point on the south bank and was clearly intended for use throughout the year including when the Tees was in flood.  It would have been built entirely of timber and looked like a viaduct from an American Western.  This was not the biggest bridge built in iron age Britain: many crossed tidal waterways.  The largest single structure I know about ran from Lincoln to York crossing no fewer than seven tidal rivers: Trent, Torne, two channels of the Don, Went, Aire and Wharfe.  Between actual bridges this roadway was an elevated causeway running across tidal marsh, connecting what were until the 18th century a series of islands.  Each island is worthy of an article in its own right.

The ‘Time Team’ have excavated part of a timber bridge at Piercebridge.  Without knowing where they did their digging I cannot say if this was the first Roman bridge, the pre-Roman bridge or a fourth bridge.  Given the quoted dates early in the 1st century I suspect it was the pre-Roman bridge.  Until I started drawing the map to show the alignment of the Roman Fort with the pre-Roman road my assumption was that the first Roman bridge was simply built without knowledge of the winter floods and swept away.  In fact the Romans seem to have moved their bridge to an auspicious alignment between two prehistoric cairns located on either side of the river.  The sight-line between the cairns is of the Midwinter Sunset to Midsummer Sunrise type and the centre of the final Roman bridge just happens to be on this line.  That this involved moving their bridge downstream onto less stable ground does not seem to have worried them. 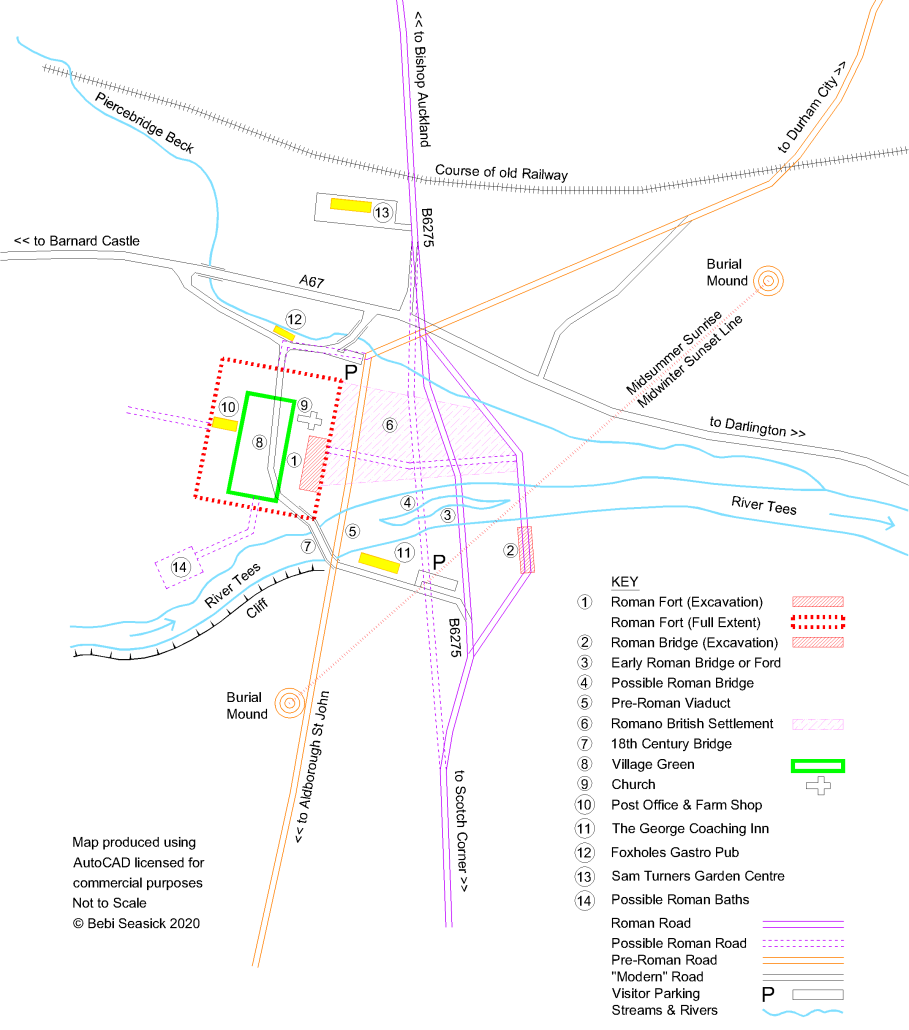 The description attached to the ruins of this bridge makes a few wild assumptions.  One being that the river bed lying on bedrock has worn away to a significant degree over the last 2,000 years and moved further north.  The reality is that the river has reduced in size since 1970 and has less seasonal variation but otherwise has not moved.  The Roman bridge was simply longer and higher than some people imagine.  It is also the case that the use of space beneath the bridge between the piers at each end did not have to happen after the river moved or the bridge was abandoned.  A great many old bridges still in use have their end spans converted into accommodation.  The Elvet and Framwellgate bridges in Durham City are famous for this and many other reasons.  New bridges are normally required after old ones are washed away in extreme weather events.  Logic dictates that the bridge is then built to take into account the worst conditions known up to that time.  These may not be repeated for another 1,000 years.  In the meanwhile the sheltered space underneath the arches is used for various purposes, at first on a temporary and then a permanent basis.  Often these purposes can tolerate a certain amount of flooding so no risk is involved.

I have no preference regarding the eateries.  The Roman ruins make for very pleasant picnic spots and are sheltered from the wind.  Not so long ago there were very popular lidos on both sides of the Tees at Piercebridge, but these have now been fenced off with barbed wire.  This is a pity as river bathing was a central part of British life for millennia.  The Time Team found some indications that the river here was used as a very early baptismal site.

A promise was made to Puffins regarding a dispatch from Kazakhstan to report upon the fighting between Kazakh forces, Russian paratroopers and ‘fuel protestors’. Located at Bishkek in Kyrgyzstan, a correspondent was only 12 miles [more…]

Some of you may remember my earlier Postcard from Vilnius Postcard From Vilnius much to my surprise that article is now 2 years old. I reference it only because it still contains much current information [more…]