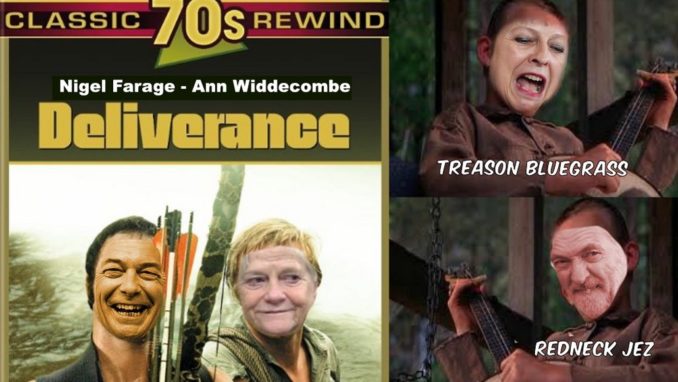 The Conservative Party and the Labour Party, the duelling banjos of UK politics, took a stuffing, a stuck-pig type stuffing in the EU elections. Squeal piggy, squeal!

Burt Reynolds was the man, the alpha male standing firm and staying afloat as fellow travellers lost their nerve in the classic 1972 John Boorman Best Picture Oscar Nominee ‘Deliverance’. If you haven’t seen it, do so – great cinematography, terrific plot and great acting – what one wants from a Hollywood product. ‘Deliverance’ follows the story of a group of friends on a canoe trip in the wilderness of Georgia, determined to take in the sights of the fictional Cahulawassee River before it is changed forever with the construction of a new dam.

Nigel Farage has clung on to the UK political canoe, laughing, facing the fight for freedom as the powerful anti-democratic rapids have approached: LabCon found splashing in their gargling white waters. The traditional meanders of UK voters’ habits from Conservative to  Labour have seen minor eddies with certain lengths of choppy turbulent flow, easing occasionally. This two party duopoly that has fashioned  UK electoral trends has, post referendum, entered the political rapids and the voters have looked beyond Labour and Conservative for a safe course. Has deliverance in the form of the Brexit Party and its enigmatic front man Nigel Farage been provided? Where to now? What waters now lie ahead in the UK?

The path to sealing electoral superiority for the Conservative Party was clear on June 24th 2016. Take the moral high ground: uphold the principles of democracy; implement the promise of government and the decision of the people made on 23rd June 2016 and Leave the EU. The Tories could have chosen a Burt Reynolds to captain the UK canoe through the Brexit process. They didn’t. Given the banjo and a massive cow’s backside to hit… …they missed. The path chosen by the Conservatives was cowardice in the face of authoritarian dominators, weakly submitting the nation to shame and pain as Ned Beatty’s beta-man cowering in front of hillbilly sadists in the Georgia wilderness.

In these 2019 unwanted EU elections, Nigel Farage’s Brexit Party was shown the same cow’s backside. He picked up the banjo and smacked it square on, with 32% of the votes cast in a crowded field. When the white waters give way sufficiently for Labour and Conservatives to take a breath, they may be wondering if they can ever climb back on the voters’ canoe. The electorate may now be out of reach. Courting 32% of the vote in a two party race (with a ‘liberal’ protest party) in FPTP would struggle to gain a majority in Westminster, but only a few points more are needed. Courting 32% of the vote in a crowded field as shown in the EU vote when scrutinised on a more localised constituency level, could reap a significant majority in the UK’s FPTP system. Could the Brexit Party provide a course to the still, clean and peaceful waters desired by an electorate tiring of Labour and Conservative petty party politicking?

Having recently been occupied with the UK’s Direct Democracy Party the Democrats and Veterans on their local election campaigns in South and West Yorkshire and following the election of three representatives to local government on the 3rd of May, I, along with other DVP members dipped their activist paddles in the water in support of the Brexit Party during the EU elections. The voters responded to the simple message – Democracy is important; truthfulness is important; Conservatives and Labour have failed.

The EU elections are of little direct influence on domestic politics today – Brexit party MEPs have no power other than to stall the EU ratchet and spread a positive message of freedom and independence, ironically aided by lucrative remuneration via the EU, courtesy of the ever pillaged UK taxpayer. We remain in the EU with a UK Parliament of evident anti-democrats. We need deliverance from the corrupt dishonest politics of the LibLabCon who have led the UK up a certain creek. Can the Brexit Party be that stable balanced kayak of common sense, democracy and a spirit of independence, self-determination, pride and responsibility? Can it break the LibLabCon at a General Election? If it polls as it has in these EU elections, then it can. But will it? – That question’s for another day. Soon.

I’d enjoyed my seaside break but I was, as always, keen to get back and see what was happening in the greenhouse. The answer, at least that first few days, was plenty, including more weeds. [more…]

Der Führer Speaks to the Nation

Ed. Boris Johnson, ruler by diktat, follower of science – those masks really work you know, decrees arbitrary imprisonment for the English population again, even though no one is dying anymore and the pandemic, if [more…]

I recently composed an article where I posited that unless there was some kind of rapprochement between the Conservatives and the Brexit Party, there was a considerable risk that this would usher in a new [more…]